Hat tip to Think Progress, which broke this story:

The state of Virginia has confirmed it will comply with President Donald Trump’s transgender military ban, which officially took effect last month after courts cleared the way.

Responding to an inquiry from ThinkProgress, Adjutant General Timothy Williams explained that the Virginia National Guard’s service members “must meet established Department of Defense (DOD) readiness standards,” including the expectations laid out by the discriminatory policy.

Williams proceeded to repeat the Trump administration’s description of the ban. “The new DOD policy doesn’t ban transgender individuals from service, and transgender service members may continue to serve,” he wrote. “The DOD policy states that anyone who meets military standards without special accommodations can and should be able to serve, and this includes transgender persons.”

In short, it appears that Virginia is going to honor Trump’s anti-transgender order, unlike several other states, and despite Ralph Northam’s LGBTQ-inclusive executive order, as well as this tweet, in which Northam said, “Anyone who wants to serve our country in the military should be welcomed. They’re patriots and should be treated as such.” I wonder if Northam ever told his appointee, the Adjutant General who wrote this letter, what his views were on this subject… 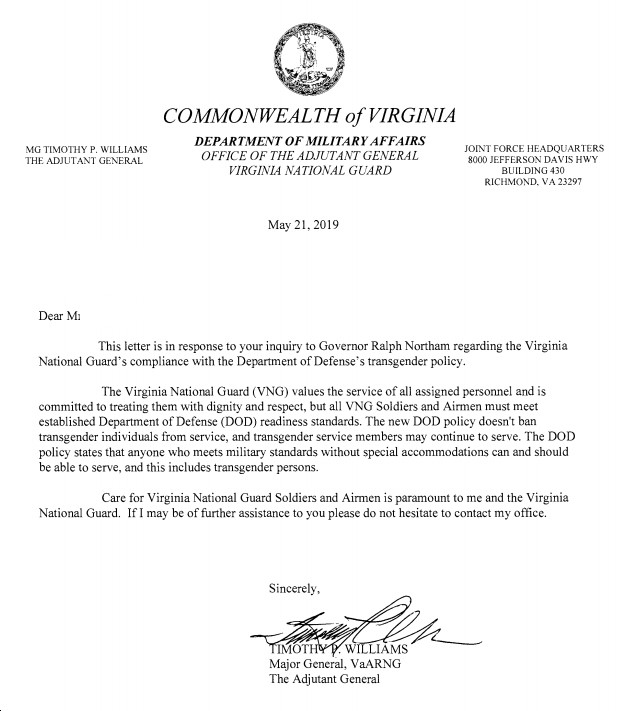