by Diana, who says she would rather be gardening and doing yoga than fighting pipelines, but that she loves Virginia’s mountains and streams and will continue to fight to protect them

Southwest Virginia came to Leesburg on Saturday, May 18, with a fantastic lineup of speakers to bring their No Pipeline message closer to home (literally: Leesburg is the home of Attorney General Mark Herring).

M.C.’ed by Sam Rasoul, Delegate from Roanoke, the afternoon began with Hip-Hop artist Rev. Leonard Yearwood giving us a history lesson.  May 17 marked the 65th anniversary of the Supreme Court decision Brown v. the Board of Education that was the beginning of the end of school segregation. We can see now that the legislators of Virginia were on the wrong side of history when they responded with “Massive Resistance” that extended into the 1960’s. Rather than comply with the mandate to integrated public schools, the state simply closed (some of) them–not for months, but for years.

“Of course as we look back now on that time 65 years ago, we can see how wrong that was. But now, with Virginia’s continued environmental injustice and insistence on building unneeded and unwanted fossil fuel projects like the ACP and MVP, Virginia legislators are once again on the wrong side of history.  The difference is that now we don’t have 65 years. This is a fight for our very existence!” Yearwood said. “We don’t have much time–the IPCC [International Panel on Climate Change] said last year we have at the most 12 years to turn this around to avert global catastrophe.”

Yearwood continued:  “Those tree sits. . .I’m not sure I could do that” . .but he gave voice to the urgency of the issue being experienced by the frontline communities along the path of the MVP.

He also admitted he was preaching to the choir.

I have to admit, it felt great to be among the “choir” again and see many familiar faces of pipeline0fighting folks I’ve seen over the years in Richmond, Augusta County, Buckingham, SW Virginia, and even West Virginia.

Another speaker who gave us a “big picture” perspective was Karenna Gore, daughter of the former Vice President, active in fighting many pipelines, not just these.  In fact both Yearwood and Gore had been at Standing Rock, and before that, had resisted the Keystone XL tar sands pipeline.

Gore called this time and this fight part of the “Epic Course Correction” away from fossil fuels, including all fracked gas and oil projects everywhere. She commented that when people say to her regarding nonviolent direct action like tree sits: “Isn’t that extreme?” No, she replied, what is extreme is pretending that nothing is wrong, that climate change isn’t happening, that we can continue to build fossil fuel infrastructure. . .

Yearwood and Gore pointed out that both Democrats and Republicans have been on the wrong side of this issue.  Yearwood said his friends in the Obama administration told him to give up, that the KXL would be built. “Well, they are no longer in office, and the KXL is still not built,” Yearwood noted. And Gore asked if anyone had heard the idea that government should be run like a business. The problem is that businesses don’t look at the true cost of their business. 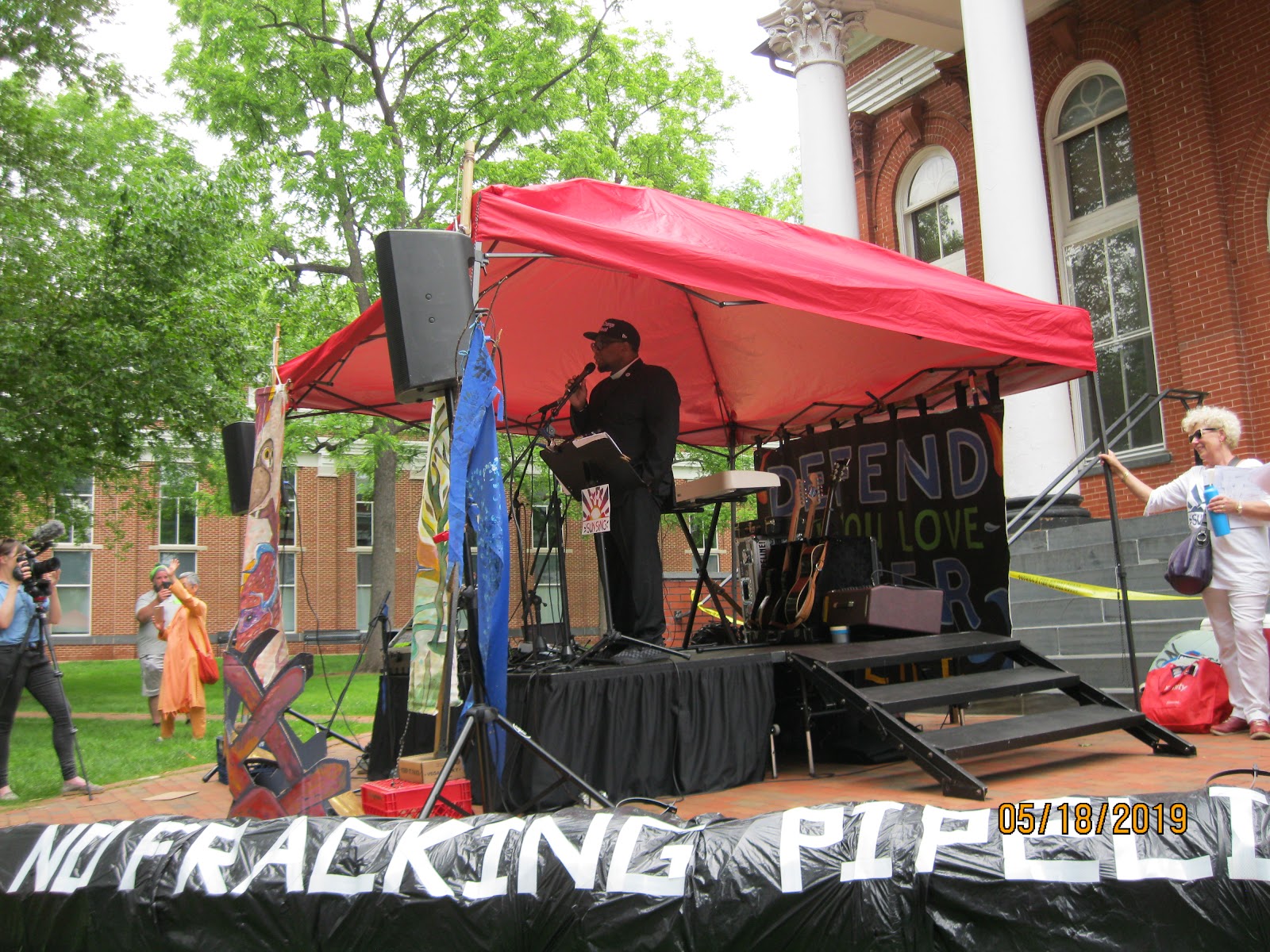 Gore named the four ways that continuing to build fracked gas (or oil) pipelines is wrong:

Below, Yearwood shares a photo opportunity with Friends of Buckingham, Union Hill members and others. The man on the left always shows up with a bottle of water contaminated from fracking operations in PA .

Of course many more excellent speakers from across Virginia and West Virginia were heard, and I hesitate to mention them for fear of offending those I might miss.  Instead, I will point you to this YouTube video, from a woman named Crystal Mello, who was not in Leesburg because she is currently in a tree at Yellow Finch. Also, please read Sam Rasoul’s piece in Blue Virginia: Yes, we can stop the ACP and MVP.  Here’s how. 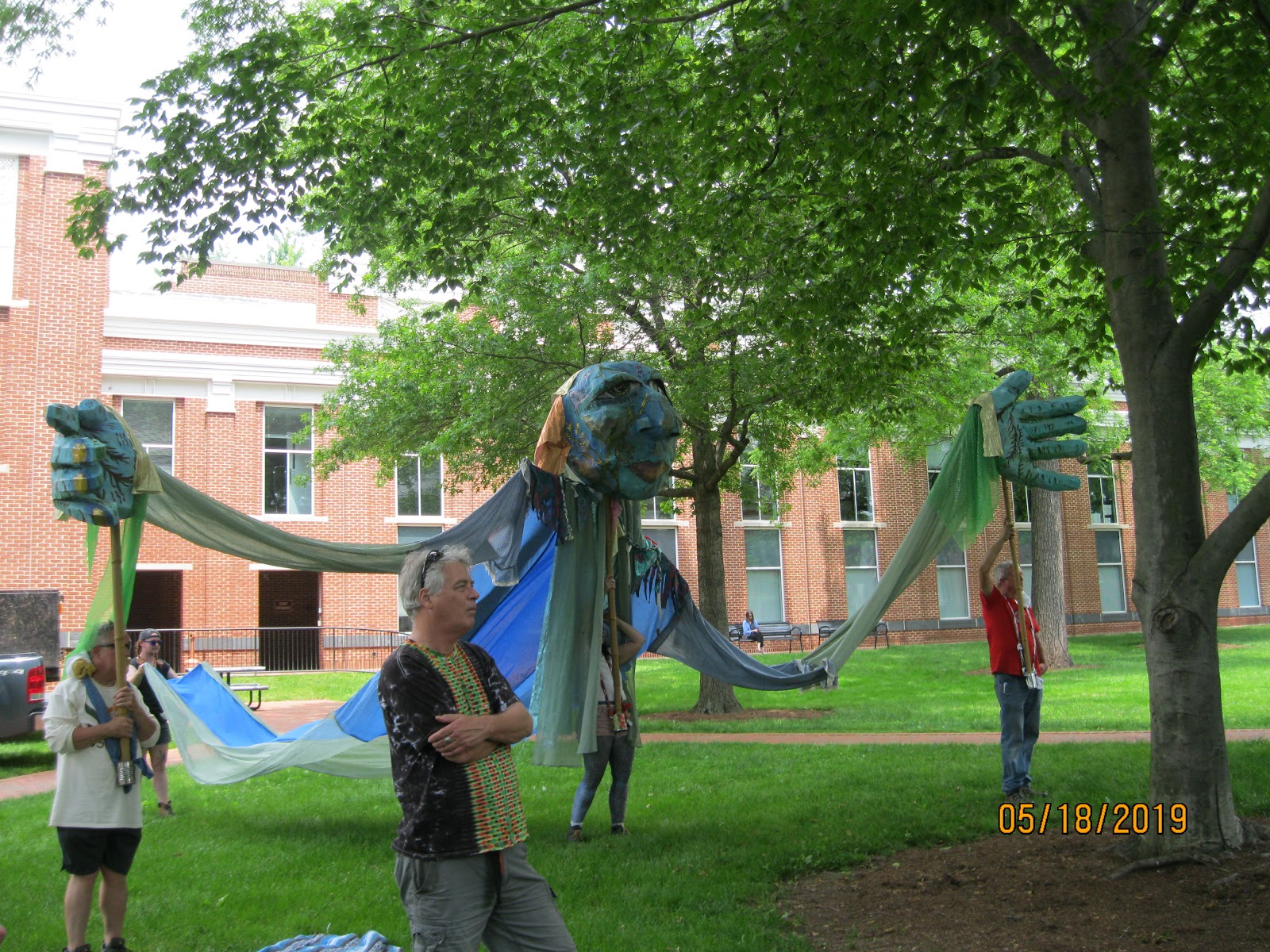 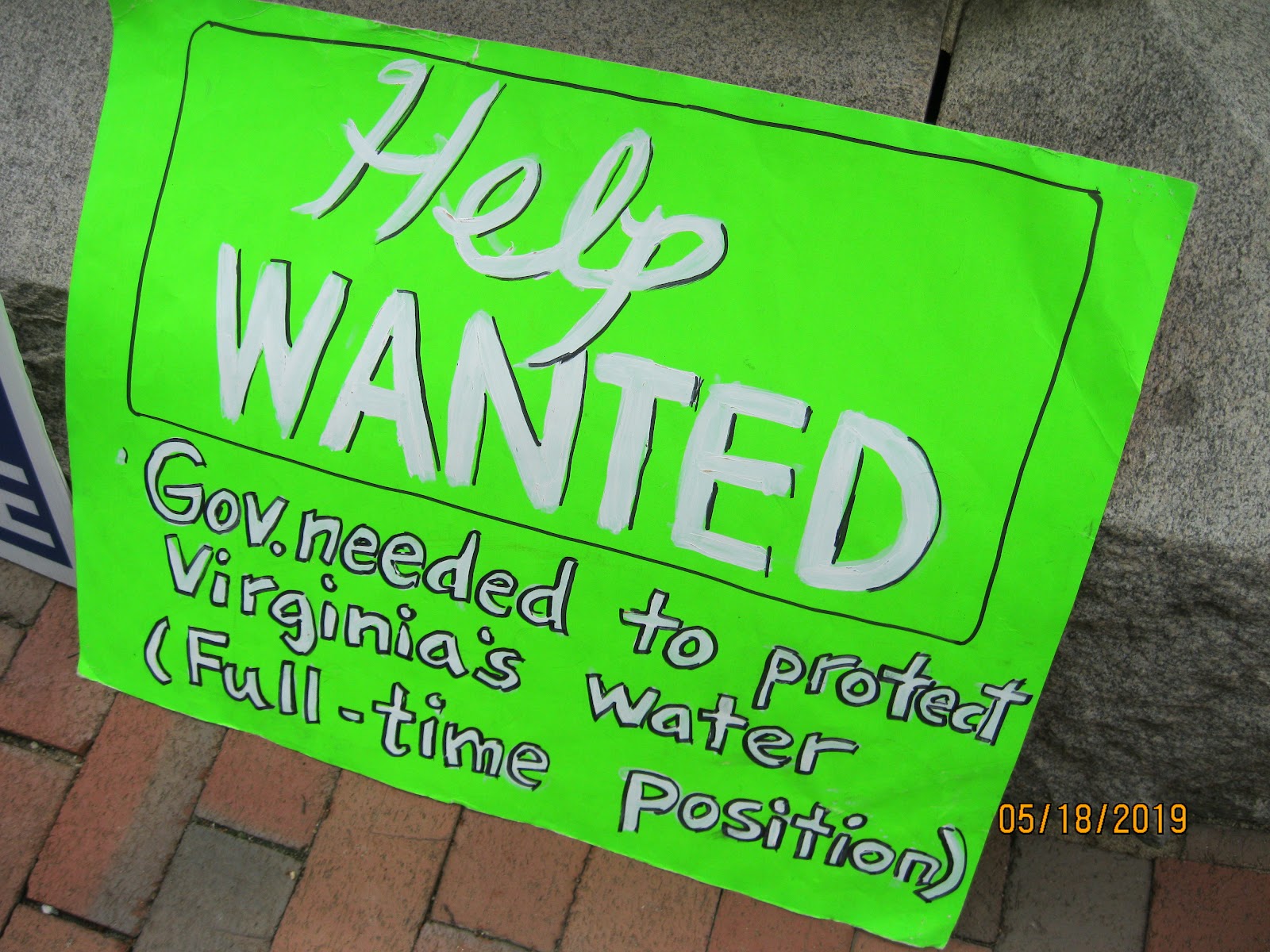 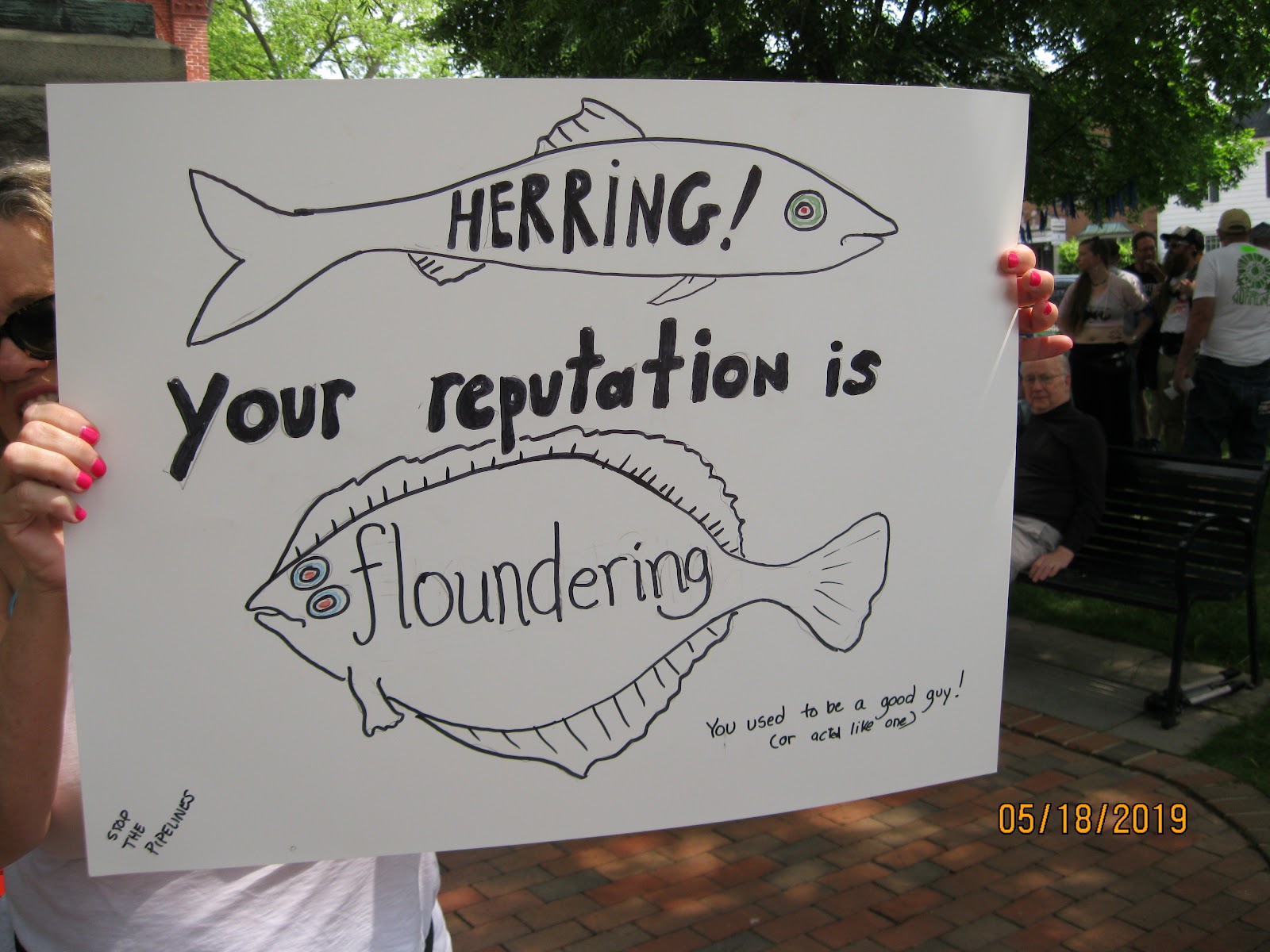 And just for fun, this creature was spotted in the morning at Boonsboro MD’s Greenfest: The 500  trash bags represents the average per capita plastic bag use in the US: 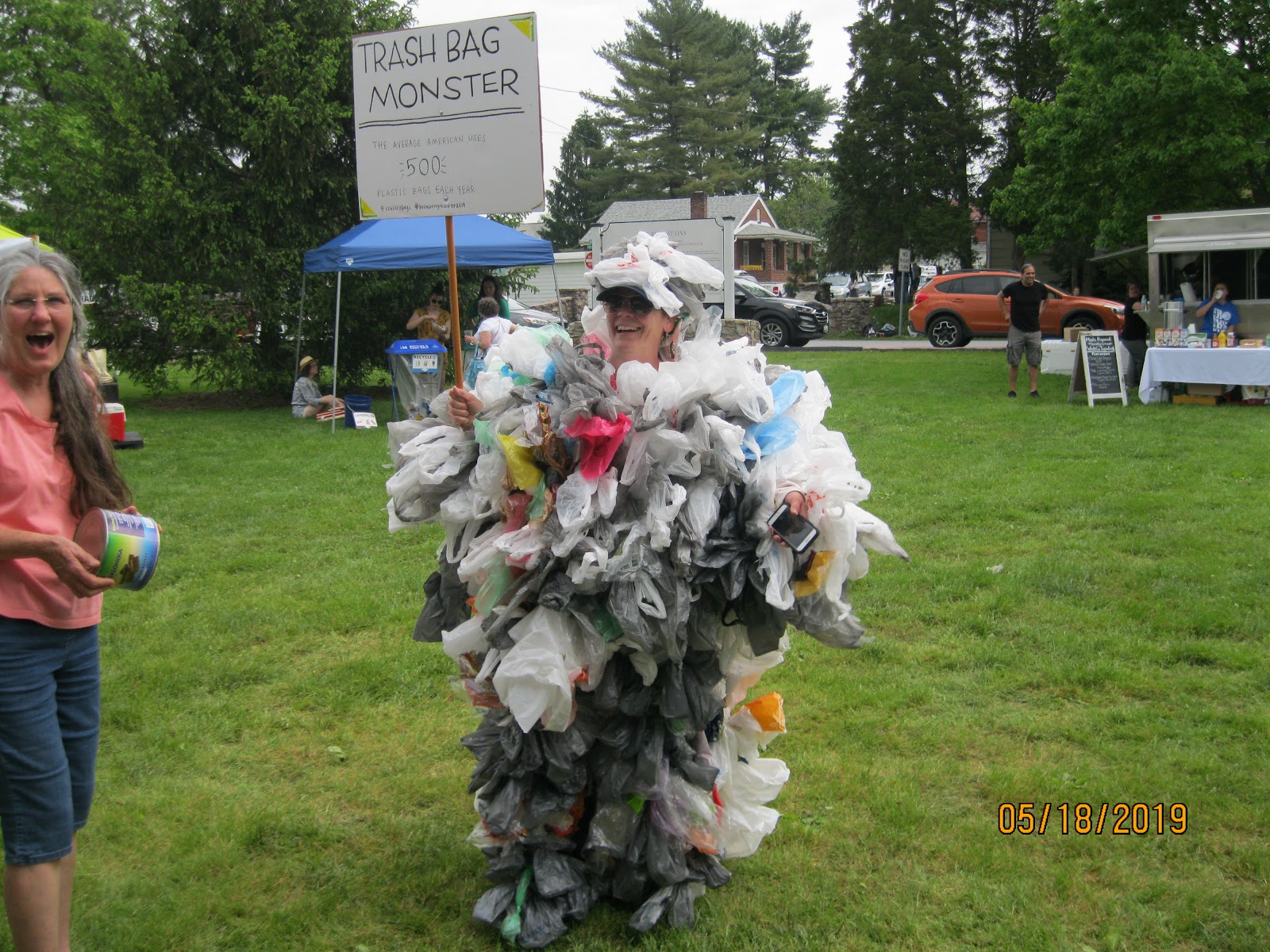