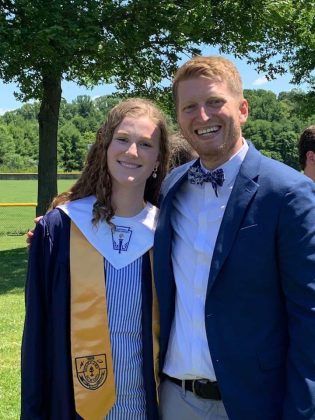 **Note: The following is Maddy’s valedictorian speech.  I asked her if I could share it with you, and she said, “yes.”  I wish I was this thoughtful as a high school senior…  As always, the kids are gonna be alright.**

This is a long ceremony. If any of you feel the need to use the restroom, ours are located down the long hallway you saw to the left as you came in, and I would like to highlight a special feature of our facilities: every single sink in the women’s restroom works. I know; it’s pretty crazy. You can turn a handle and water comes out. Not even just a few drips, but a strong flow that you can easily wash your hands in.  I’ll let you take it in for a second.

You see, it wasn’t always like that. That’s why, even though I’m standing before you as the class of 2019 valedictorian, getting those sinks fixed–of which only one has been functioning since my freshman year–is my greatest accomplishment at this school. I want you to take that seriously because I seriously mean it.

And would you like to know how I accomplished it? It was very simple really: I complained. It started small, a word to a friend or fellow student.  But then, when nothing happened, I got louder.  I would talk to teachers or staff.  Finally, I voiced a well-timed complaint in front of the entire school.  And, well, I’m telling you: go use that bathroom.  All the sinks work.

And this is not a one-off; I proudly call myself I complainer. I am practiced and skilled in the art. What’s more than that, I think this class of 2019, all the classes of 2019, and really our entire generation are some of the best complainers the world has ever seen. Now, I see some nodding heads out there, especially amongst the older generations. I’m sure many of you would be quick to agree with my statement that we are complainers through and through.

Of course, your agreement might be to a statement that’s not quite how I mean it.  Because when I say that we are a class and a generation of complainers, it’s not a dig, it’s not derogatory.  In fact, I could not be giving a bigger compliment.

Because you know who else were complainers?

MLK, and countless fighters of the Civil Rights Era, were complainers. They saw something wrong with the world, and refused to be silenced (although many, many tried to do so). They stood up and told the world about its flaws. They fought against the racism entrenched in our country’s culture and laws, and they fought for the citizens who were being harmed every day from it. More than this though, MLK, and so many others, preached a way through. They complained about the issues and offered a path of light through the dark.

Ruth Bader Ginsberg was a complainer (and is still very much so today). Much like King, she saw an injustice caused by both societal norms and the law, and so she complained her way all the way to the Supreme Court. In front of our nation’s many courts of law, she showed the judges she came up against that the United States Constitution guaranteed equal protection under the law and that protection extends to all citizens regardless of sex. She was brave enough to not only stand up and inform the public of the issue, but to systematically begin to change it.

Malala Yousafzai is a complainer. When she was younger than even we are now, she defied one of the most feared and dangerous military groups in the world, calling for girls to receive an education under Taliban rule. She persisted under great personal peril and even after an assassination attempt that ended with a bullet in her head, she continued to make noise and fight for what is right.

These three people, everyone who stood with them, and everyone who stands for every other cause, are all complainers. They see something wrong in the world, and they take action to fix it, the first step of which must always be to articulate those injustices to others.

Now, don’t get me wrong.  I don’t mean to equate our sinks to the work of these three amazing people.  Clearly, they’re not the same.  But, I wonder if complaining isn’t a little bit like a muscle; it might take time, training, and repetition to fully use it. Someone might start small but eventually and with practice, work their way up to things of greater and greater significance.  And, just like some people can lift 200 pounds right off the bat, some of us might need to start a little lighter.

So if I had to give one piece of advice to my class, it would be to find your sinks and then don’t stop.  Use that muscle; train it. Keep on complaining, speaking up, taking action, and doing, rather than watching. We are a part of a whole: a whole generation, a whole country, a whole world that needs complainers. So congratulations to the class of 2019 and may your complaints carry you far.