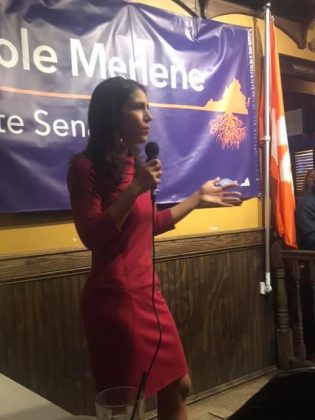 Peter Rousselot, former Chair of the Arlington County Democratic Committee, has already eloquently laid out the logical reasoning as to why Nicole Merlene is the best candidate to represent me and my fellow residents of Virginia’s 31st State Senate District.

But please allow to lay out the values driven reasoning as to why I am voting for Nicole Merlene.

After about fifteen years of working and volunteering on dozens of Democratic campaigns in Arlington, across the commonwealth, and at the national level, on June 11th I’m ready for something more than our current representation – and I believe that Nicole Merlene is that positive and proactive choice. But I am not supporting Merlene solely for the sake of change, but because we would sincerely be better off under her integrity and leadership.

That’s not to say that I am one to take an “anti-establishment” stance on how I support. I am a steadfast and strong supporter of my Congressman, Rep. Don Beyer. He constantly leads from the front on progressive issue after issue and uses his seat in a way that makes me proud to be his constituent. This is the exact opposite of how I feel about Barbara Favola. Her late to the game and watered-down Democratic values have constantly left me wanting stronger representation. I have worked with Democrats and progressive organizations in Richmond for many years and support is often incomplete, transactional, and comes with a sense of entitlement.

To be perfectly frank, the 31st Senate District is a pretty safe seat. So that means its representative doesn’t have to play it safe. You can lead on any issue like Congressman Beyer, and you don’t have to accept take money from every contributor. But on Tuesday at the last debate of primary, Barbara Favola bragged about her bank account while dismissing criticism of the sources such as lobbyists from Dominion – from who she pledged not to receive funds.

On the other hand, I am extremely happy to continue my support for my Delegate and friend Alfonso Lopez –  which leads me to my next point. At the Arlington Branch NAACP 2019 Candidate’s Forum on May 29th, their Vice President asked all candidates present for their position on whether Gov. Northam should resign over his blackface scandal. Del. Lopez was first to the microphone and clearly stated his continued call for the Governor to resign. The next to express their position was Barbara Favola – who attempted to misconstrue her position. However, Merlene was next to answer and not only articulated her position that the Governor to resign, but also called out Favola’s statements on The Kojo Nnamdi Show on March 1st where she took back her call on the Governor to resign. Following Merlene, all five of the remaining campaigns at the forum joined Lopez and Merlene in the position that the Governor should resign – leaving Favola alone, seven to one. Honesty and the integrity to defend your positions are values I want to vote for – not shying away from your stances because are ashamed of sharing your true actions in public.

From county board commission members to state party officials, I have been speaking to strong Democrats in the 31st Senate District who are also ready for better leadership. Nicole Merlene is not a candidate with big donations from Dominion. She isn’t blanketing you with mailers, dropping yard signs you didn’t ask for on your door, or twisting arms behind closed doors.

But she is knocking doors. She has been standing up at forums and debates speaking truth to power, and she hasn’t been holding back because it is the safe option.

I’ve been called everything from establishment to outsider, but one thing I am not is scared to stick my neck out for a candidate I believe will better serve our community and commonwealth.

This Tuesday, June 11th, I’m voting for Nicole Merlene and I ask you to join me.