JAVAID SIDDIQI WINS DEMOCRATIC NOMINATION FOR MIDLOTHIAN BOARD OF SUPERVISORS; Over 1000 attend caucus.

Midlothian – Sara Gaborik Chair of the Chesterfield County Democratic Committee today announced that Javaid Siddiqi is the Democratic Nominee for the Midlothian Board of Supervisors.

Sara said “I congratulate Javaid and we are looking forward to a vigorous campaign and we’re excited to have public education as a top priority in Midlothian.”

“I’d also like to thank Marty Mooradian for running a spirited campaign and bringing many issues to the table. We are looking forward to working with both of them moving forward towards victory in November. Clearly Democrats are very enthusiastic as evidenced by the tremendous turnout of over a thousand voters in a magisterial district caucus,” Sara Gaborik stated. 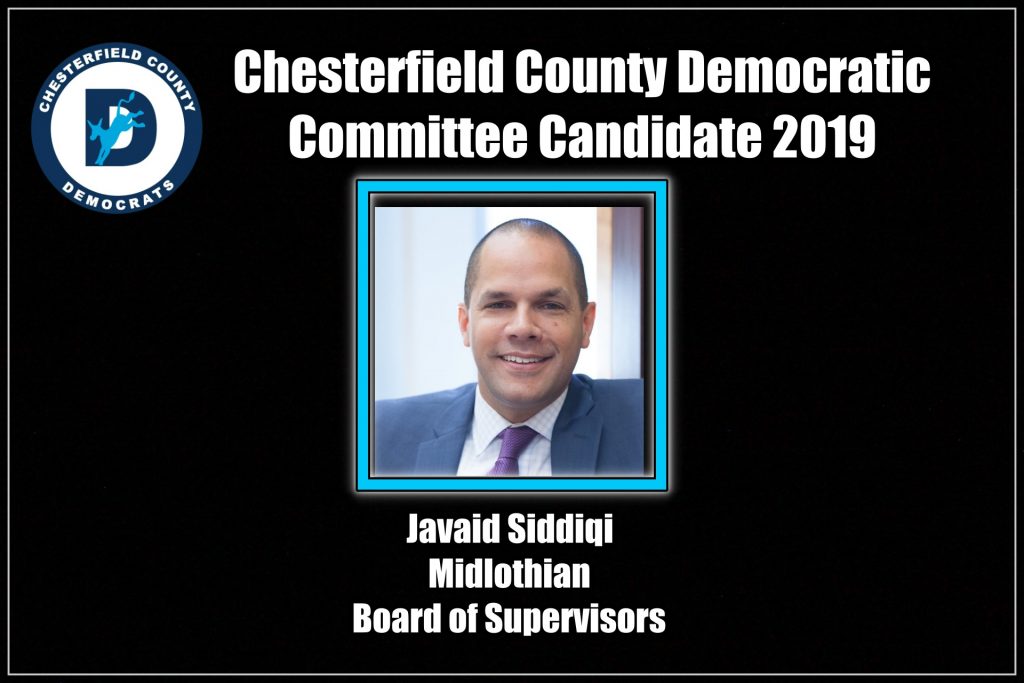 I want to congratulate Javaid Siddiqi and his team on their win today. It was a hard-fought race and I wish you the best of luck in November.

Second, I want to thank my team and all of our supporters for their hard work and dedication over the last few months. You all were so amazing and I am so proud of what we were able to accomplish together.

Finally, I want to say, that as Democrats, it is now time for us to come together to turn Chesterfield blue. If the turnout for this caucus tells us anything, it’s that Chesterfield Democrats are energized and ready to fight for a majority in November.

I am honored and humbled to announce that I will be representing the Democratic party in the November Chesterfield County Board of Supervisors race for the Midlothian District!!

The campaign leading up to this point has been inspiring, exciting, and challenging all at once. What I know without a doubt is that I could have never earned this nomination without your support. The road to get here would have been far more difficult and far less fulfilling without my family, our team of volunteers, and a group of incredible community supporters who have opened their hearts and homes to help spread our message of how we’ll move the county forward.

I want to also congratulate my opponent, Marty Mooradian, on his ability to engage our fellow community members. Together, we were able to bring Democratic voters out in record numbers, a sure sign of how much this race matters to the residents of the Midlothian district.

As we look toward November, I hope to earn the support of those community members who may not have chosen me during this primary election. I am well aware of the effort and resources that will be needed to unseat Leslie Haley and I look forward to doing that as a united group.

Again, thank you for your support. I take your vote and trust in me seriously and look forward to continuing to meet and hear about the issues that are important to you.