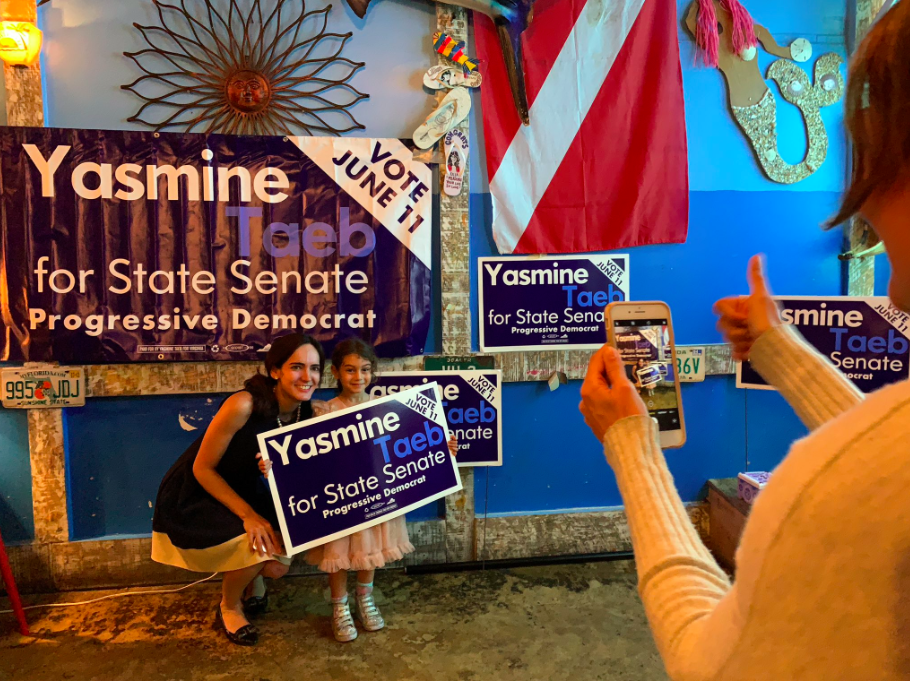 Author’s note: I originally wrote this as a personal e-mail to my local Democratic “huddle” group, but also thought it serves as an excellent summary of my thoughts on why we should elect Yasmine Taeb to represent the 35th Senate District. Here is it with only very minor edits:

I had a chance to talk about our district’s Senate race (in favor of Yasmine Taeb) at our past meeting, and with so few in attendance (it happens!), I wanted to deliver my thoughts to you all by e-mail.

I just want to convey one thing before everyone goes and votes on Tuesday.

Good people can disagree on the important of experience, on policy, and what you want in a state Senator. I trust all of you deeply, and more importantly, really admire those of you who have invested years upon years (even decades) of time to elect Democrats. Nothing that happens on Tuesday will change this grounding of respect. You all make me so proud to have grown up in this neighborhood.

But I am personally asking you to consider this one thing before Tuesday.

If Senator Saslaw is re-elected, he will end up serving 48 years representing this district.

That’s 13 years longer than I’ve been alive. And he’ll have been the Senate Leader for the Democrats for 28 years. When Senator Saslaw was elected to the Senate in 1980, there were only 9 women (out of 140 seats) holding office in the General Assembly. Nine.

The bottom line is this: I want you to consider seriously that it’s time to pass this seat on to the next generation.

In 2003, I was working on my first campaign in Northern Virginia, and I was told constantly that Democrats weren’t “ready” to support gay marriage and same-sex benefits. (Saslaw voted against recognizing same-sex marriages and their associated rights in 1997).

In 2008, I was working on the Obama campaign and constantly heard this nation wasn’t “ready” for an African-American President, even from fellow Democrats.

In 2015, I attended local Democratic meetings and was told by fellow Democrats including Senator Saslaw that changing J.E.B Stuart High’s name was political correctness run amok. A short time later, I saw those same people cutting ribbons and pretending like they had supported the name change all along.

Look, I get it. Supporting young, progressive candidates and policies can be discomforting. You worry you’re signing onto a bill of goods that might not be thought out or have unintended consequences down the line. You worry this person might not have the experience or depth of policy knowledge to do the job. I’ve been there.

But 2017 saw the greatest infusion of young, progressive, “inexperienced” Democratic talent in Virginia of my lifetime. And what did we get with it? A near-majority and solid reforms on health care, criminal justice, and the like.

Senator Saslaw certainly deserves some credit stewarding along some of these policy reforms, but they absolutely do not happen without that infusion of younger talent who went off and won elections, many of which more “experienced” voices thought were unwinnable and barely invested a dime into.

And so when a young woman with impressive credentials (first Iranian-American women elected to the DNC, served on NARAL’s board, long-track record of serving on Democratic Party committees) and a solid policy platform decides to run for this seat and knocks on more than 40,000 doors, I just want people to pause for a moment and seriously consider one thing:

Isn’t it time to lend this seat to the next generation of Democrats, so they can have their chance to help remake this Commonwealth?

That’s all I am asking. If you consider this notion seriously before you vote, I honestly have no problem who you vote for. Good Democrats can disagree on this question of experience versus freshness, and where they stand on policy.

But as a young person in politics myself, I’ve seen time and time again how new voices are discounted, dismissed, and seen as unacceptable—only to see those same views be ratified and championed by those same critics years later. Life as a young Democrat in Virginia can be bittersweet in that way.

So let’s be clear—this seat will go Democratic no matter what. And the views of a 40-year, pro-business incumbent with deep ties to trade associations aren’t exactly under-represented in Virginia’s General Assembly.

But do you know whose views in Richmond are under-represented?

If you take all of the above into consideration, you won’t hear a word of complaint from me no matter who you vote for.

And come Wednesday, we’re all on the same team again to take our majority in the General Assembly in November.

Thank you so much for your consideration and your activism. I will always be in your debt for that work.