Yesterday, “President” Trump went on national TV to actively encourage/solicit 2020 foreign interference in our elections. As Rick Wilson in the Daily Beast wrote, “This was no fifth-dimensional chess move; it was the commander in chief saying the quiet, treasonous part out loud.”

Now, presumably in response to backlash against his treasonous remarks yesterday, Trump is doing what he always does – lashing out, making shit up, etc. For instance, see the following tweet this morning from the treasonous tweeter-in-chief, in which he accuses Sen. Mark Warner of speaking with “a talented entertainer purporting to be a Russian Operative” about “extremely negative information on me.” (I know – WTF???)

In response, Warner’s communications director tweeted, “literally, i have NO idea what he’s talking about.” Nor does anyone else, I’m sure. 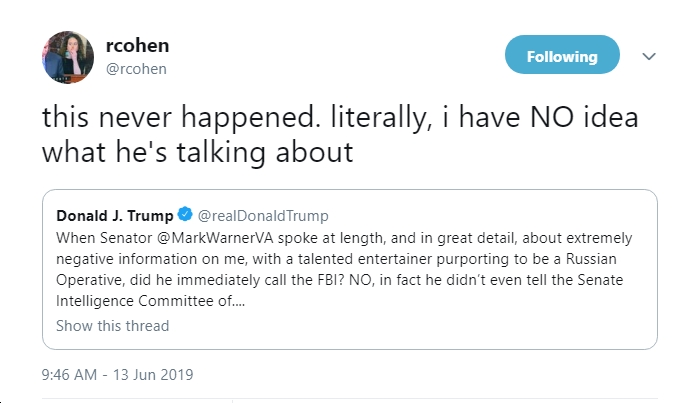 That includes Sen. Warner himself, who has no clue what crap is spewing from Trump’s weirdly orange-colored pie hole.

Of course, you can see why Trump might be upset, because presumably he knows he’s guilty as sin. Of what? Lots of things – corruption, collusion, etc. – but in this case, as Sen. Warner says, of having “given Russia the green light to interfere in the 2020 election.”

With that, here’s some video of Sen. Warner, calling Trump’s comments yesterday “extraordinary even in a Trump world,” adding: “My hope and prayer would be that someone in the White House would counsel Mr. Trump that he oughta recognize that foreign interference is beyond the pale in terms of honoring your obligation to protect and defend the United States.”

Sen. Mark Warner: “All of us, when we take an oath of office, swear to protect the United States from enemies both foreign and domestic. The comments of President Trump yesterday were extraordinary even in a Trump world” https://t.co/x7ONm2mQIq pic.twitter.com/T3vpalNIJP

Sen. Mark Warner: “My hope and prayer would be that someone in the White House would counsel Mr. Trump that he oughta recognize that foreign interference is beyond the pale in terms of honoring your obligation to protect and defend the United States” https://t.co/x7ONm2mQIq pic.twitter.com/VrUmrmnGuI