There have been a lot of really dumb reactions, by Republicans and right wingers, to Tuesday’s Virginia Democratic primaries. See below for a few examples, including an explanation as to why they are moronic, false, etc.

First off, let’s look at the Republicans’ idiotic “hot takes” regarding Joe Morrissey’s win over Sen. Rosalyn Dance in SD16.  For instance, see below for what Chaz Nuttycombe said on Twitter, in response to the “National Republican Redistricting Trust” (which wrote, “An African American Senator in a 53.1% BVAP district (#SD16) lost her primary to a white challenger. As leg defendants in Bethune-Hill testified: to comply with the VRA Virginia leg districts in some parts of Virginia need to be closer to 55% BVAP”). Here’s Chaz’s response to that one:

“A higher BVAP would mean a larger Morrissey win. Morrissey did well in areas with a higher black population, Dance did better in areas with a higher white population. You clearly don’t know what you are talking about. Higher BVAP wouldn’t have prevented Morrissey’s win…All you have to do is look at the map of the primary results and % of African-American population in each precinct, but I guess that’s not in the capacity of the ‘National Republican Redistricting Trust’…It’s also amazing a group that’s trying to get Republicans redistricting power so they can screw over black voters in the 2021 redistricting process by packing them is trying to claim SD-16 was an ineffective VRA district.”

Also, many Republican are trying to claim that Dance’s loss was in part due to the fact that Ralph Northam supporter her publicly. For instance, listen to this idiocy by Pete Snyder and John Fredericks:

Snyder: “Look at what happened to Roz Dance and Joe Morrissey. It’s not the party of Ralph Northam…He got trounced. It was the only race he focused on, that he overtly put his money into and publicly campaigned, and got trounced in the Richmond area. It’s just remarkable; this is not the same Democratic Party.”

Fredericks: “No question, this is a disaster for Ralph Northam. Just when you thought it was ok to come outside again, it got worse…One candidate allows Northam to campaign with her – one, in the entire cycle, and that is Roz Dance, the incumbent Democrat [sic] Senator with all the money and all the establishment, the favorite – allows Northam to campaign with her, go public for her, and she gets buried last night, she got crushed. This is a wakeup call for Ralph Northam…It was a repudiation beyond belief, I don’t care what the polls say; the guy got rejected, he got embarrassed last night, a complete humiliation, nobody’s going to want to have anything to do with him, it’s going to have ramifications going into November.”

And then there’s the far-right “Washington Free Beacon”, which strongly pushed the narrative that Sen. Dance’s loss to Morrissey Tuesday night was due, at least in large part, to “Dance ha[ving] touted an endorsement from the scandal-plagued Northam and campaigned with the governor in the final weekend of the campaign.” (Note: the Washington Post also pushed that narrative hard)

In response, see the Democratic group 90for90, which nails it on this idiocy:

“You’re trying much too hard to draw a correlation to Ralph Northam. The Dance/Morrissey contest was about Dance and Morrissey; not Northam. In Va. Beach, Turpin and Hippen, (the top 2), are well known area Democrats. Howard was a new name to many voters. Northam played no part.”

In short, Joe Morrissey won because he is VERY popular (agree with this or not, it’s reality) – almost a folk hero in some ways –  with many African-American voters in that district. Also, Dance ran a weak campaign, was overconfident/cocky and only began to take the challenge seriously towards the end, by which point it was probably too late. In stark contrast, Morrissey hustled, campaigned hard, was on the radio constantly, put up billboards, etc, etc. Also, as a smart Democratic political analyst said to me, “Petersburg is a mess and [Morrissey] capitalized on that.” Put all that together, and…voila, Morrissey beat Dance. Nothing whatsoever to do with Northam. And no, I have no particular reason to defend Northam, as I was an Aneesh Chopra supporter in 2013 against Northam and a Tom Perriello supporter in 2017 against Northam – in other words, I’m certainly no fan of Northam, for a whole bunch of reasons. But the reality is that there’s zero evidence Northam’s support for Dance changed the outcome of that primary in any way. Heck, if anything, it could have made the race closer than it would have been otherwise, for all we know… 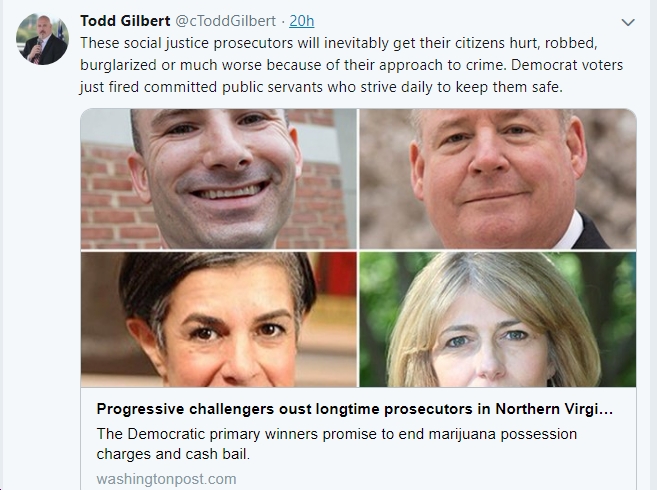 Seriously, the Virginia House GOP Leader actually believes that because Parisa Tafti and Steve Descano won on Tuesday, there’s now going to be a wave of assaults, robberies, burglaries, “and much worse.” The fact that this guy’s below just Speaker Kirk Cox in terms of power in the Virginia House of Delegates tells you all you need to know about Virginia House Republicans. This November, let’s make sure we return these far-right extremists to (preferably small) minority status.

Then there’s the “hot take” by the climate-science-denying, anti-government, etc.  Jim Bacon, who wrote (bolding added by me for emphasis):

Personally, I think Dehghani-Tafti’s nostrums are a recipe for disaster. The “broken windows” theory suggests that expunging minor infractions will contribute to an atmosphere of lawlessness that will increase crime. Her policies could well lead to Arlington becoming San Francisco-on-the-Potomac, ridden with petty crime, homelessness, and feces- and needle-infested public spaces….

Yikes, sounds really scary, huh?  Except that basically none of that is likely to occur. Still, it’s very revealing for how right wingers think, what they worry about, etc.

Following along with that same theme, there’s also hard-right “Power Line,” which wrote that Tafti’s and Descano’s wins Tuesday night were “GOOD NEWS FOR NORTHERN VIRGINIA CRIMINALS.” And then there’s this Daily Caller “reporter,” who tweeted, “The Soros funded candidate won in Arlington, VA. She has been a public defender in the District of Columbia but has no experience as a prosecutor and says she is more attuned to systemic prejudice in the criminal justice system.”

Oh, and there’s this guy – who is “Deputy Director of the C. Boyden Gray Center for the Study of the Administrative State, Antonin Scalia Law School” (’nuff said) and formerly “Legal Fellow at the Heritage Foundation” – who tweeted, “Results in and Soros won his prosecutor Dem primary races in Arlington, VA. NoVA going full sanctuary city / SF…Whatever your opinion on the politics, there’s something deeply immoral and even violent about a carpetbagger pumping $1 million into local races.” (Note: it’s terrible unless it’s fossil fuel companies or the Koch brothers, of course, or someone else on the right pouring millions if not hundreds of millions into our political system)

Finally, there’s this Republican “hot take,” that because turnout was higher for the GOP primary than for the Dem primary in SD7, it means Dems are DOOOOOMED! – or something. I’ll let Chaz Nuttycombe respond to this one; from his Twitter thread on the subject (bolding added by me for emphasis):

“Seeing a lot of people mention how there were more votes in the GOP primary than the DEM primary in SD-07 in Virginia Beach, and that means Republicans are favored in the district. A reminder: 2018 VA-02 R primary votes: 37,497 2018 VA-02 D primary votes: 28,162…Unless you live in Washington state, primaries in individual districts do not equate enthusiasm for a party. This is a tired take with no proof to it: the only place it has merit is in the statewide primary vote where there’s a statewide contest, and that’s only sometimes…The ‘sometimes’ is referring to states like Kentucky, where there are lots of Republican voters who are registered Democrats, and thus the Democratic primaries always have more votes…

…Here’s a throwback to the gubernatorial primary vote by house district in 2017, back in the day when @JMilesColeman would make maps for me to color in (oof). There were more D votes in several heavily R districts…So please don’t say ‘well, there were more [party] votes in this district so it’s probably voting [party].’ Ever ever ever…Also to note in the previous map: in HD-28, voters overwhelmingly voted in the Republican primary. The HoD race was razor-thin and Northam carried the district. He lost several of the districts handily in the western part of the state where there were more D votes.”

Anyway, that’s just a small sampling of dumbass right-wing/Republican “hot takes” since Tuesday’s Democratic primaries in Virginia. There are numerous others I’ve seen out there, and I’m sure there will be many more in days and weeks to come. If you notice them, please let us know in the comments section. Thanks.

Wednesday News: “Ukraine reports ‘rapid advances’”; “Jackson Turns Originalism Against Conservatives”; “Herschel Walker is a symptom. The GOP is the problem.”; “Twitter under Musk ‘will become a supercharged engine of radicalization'” https://bluevirginia.us/2022/10/wednesday-news-ukraine-reports-rapid-advances-in-bid-to-retake-key-regions-jackson-turns-originalism-against-conservatives-to-argue-for-minority-voting-protections-herschel-walker-is