What’s described below is simply unacceptable, as far as I’m concerned. In short, the oldest son of Monica Hutchinson – who is active with the Henrico County Democrats and New Virginia Majority, among others – was attending the Virginia General Assembly Special Session on gun violence prevention yesterday as part of a group of “42 amazing young black children.” Hutchinson’s son chose to sit silently/respectfully in the Senate gallery during the Pledge of Allegiance, and would have done so, except that he was – according to multiple witnesses – physically forced by a Capitol Police Officer (who happens to be a white female) to stand. Monica Hutchinson is understandably “LIVID,” as she says, and 100% correct that the officer had “NO right forcing him to stand.”

Now clearly, there are a lot of people who feel strongly that everyone should stand during the Pledge of Allegiance, and there has been a great deal of (heated) national debate on this issue. Personally, I always stand and recite the pledge, but my choice is to never say the words “Under God,” which were added during the McCarthy-era “red scare.” That’s my choice, and my right, as an American. The bottom line, in my view, is that if this nation’s about freedom and liberty, as Republicans constantly claim, then nobody should be forced to stand, or to recite, the Pledge of Allegiance – or to sing the national anthem for that matter. If, instead, one wants to sit silently, or stand silently, what’s the problem exactly? Don’t we have the right to do that in this country? Sure seems obvious to me that we do, even if there are some who don’t like it.

As for a police officer physically pressuring/forcing someone to stand for the Pledge of Allegiance, that’s just completely unacceptable, illegal and unconstitutional IMHO. I presume this isn’t the policy of the Virginia Capitol Police, to physically force people to stand during the Pledge of Allegiance? If so, that policy needs to be changed immediately, and we need to figure out who ever put such a crazy policy in place. If not…then what on earth happened yesterday?  Are there going to be any consequences? At the minimum, this most certainly should never happen again.

P.S. As a friend of mine notes, “this is the people’s building, it belongs to the people of Virginia. That angers me in a very different way than, say Kaepernick and his employer.” 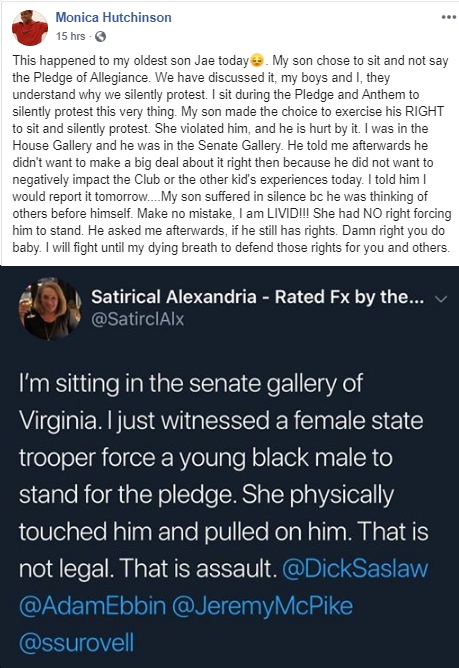 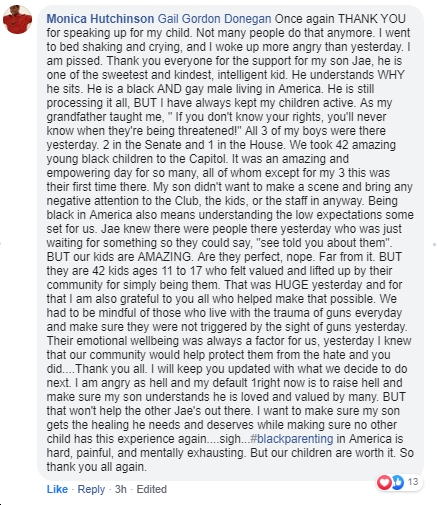