When I got involved in Virginia politics back in 2005, one of the first things I noticed was that Virginia governors and other elected officials love love LOVE to crow about Virginia being ranked the #1 state for business. For instance, Tim Kaine bragged in practically ever campaign speech I ever heard him give that Virginia was the “best managed state”  and the “best for business.” Same thing for Mark Warner, whose campaign website boasts, “When he left office [as Governor] in 2006, Virginia was consistently recognized as the nation’s Best Managed State, the Best State for Business, and the Best State for Educational Opportunities.” Same thing for Bob McDonnell, who said in September 2013 that ” “Our desirable business climate continues to be recognized by prestigious, independent third parties like Forbes.com, and we are thrilled to regain the No. 1 spot as ‘Best State for Business.'” And same thing for Terry McAuliffe, of course, who said in October 2017: “This new ranking is evidence that the steps we are taking to build a new Virginia economy are paying off and that independent observers are taking note.”

Now, it’s Gov. Ralph Northam’s – and also Speaker Kirk Cox’s and many other Virginia politicians’ – turn. See below for statements by Northam and Cox, including Northam’s appearance this morning on CNBC (note: click here for CNBC’s state rankings). Note how everyone takes credit for this ranking, even though it’s basically been the case that somebody’s ranked Virginia the #1 state to do business since the 2002-2006 Gov. Mark Warner administration (or earlier). But, of course, politicians are gonna politician…whatever.

A much bigger, more substantive, issue I’ve got is that, while Virginia is (and has been for many years) a VERY “business-friendly” state, it ranks DEAD LAST for workers, with a disgraceful 1.85 overall score (including ZERO on Wage Standards and ZERO on Right to Organize) – below Mississippi (7.25 overall score) and Alabama (7.97 overall score). Also, as I noted, the question is *why* exactly Virginia is considered so “business-friendly.” And sadly, it’s in some ways the flip side of the fact that Virginia sucks for workers in just about every way: #51 overall, #51 on wage policies, #48 on worker protection, #49 on right to organize, and of course our pathetic $7.25/hour minimum wage. Of course, that’s what Republican/corporate control of the Virginia General Assembly gets us, and a great reason why we need to change course this November.

On the plus side, it’s great to see Virginia ranked #1 for education (a Democratic priority, of course), #13 for infrastructure (again, a Democratic priority) and #17 for quality of life (note: this metric includes “level of health insurance coverage,” where I’d remind everyone that Republicans opposed expanding Medicaid for years, with it finally passing in 2018 thanks to massive Democratic gains in the House of Delegates and Democratic control of the Governor’s mansion). But personally, I’d be a lot more comfortable to see Virginia as not just “business-friendly,” but ALSO “worker-friendly” “environment-friendly” (see here for a recent state ranking, which has Virginia at a mediocre #27 on “eco-friendliness”) and “clean-energy-friendly” (Virginia’s mediocre at best on this metric as well) — all things Democrats support and Republicans oppose – as well. If you want to see these things too, make sure you vote this November – and every November!

Over the past 18 months, we’ve worked together to continue our progress, making Virginia a Commonwealth that everyone wants to live, work, and raise a family in. That’s why I’m so proud to share with you that CNBC has just returned Virginia to its rightful place –for the first time in a decade—by naming us the best state in the nation to do business.

You can see my announcement on CNBC here.

We accomplished this by:

It’s these core values that make us the Commonwealth we all love— our commitment to public education, inclusiveness, healthy families, and our drive to ensure every Virginian has a chance to succeed, no matter who you are or where you live.

Thank you for all you do as we forge the way ahead. 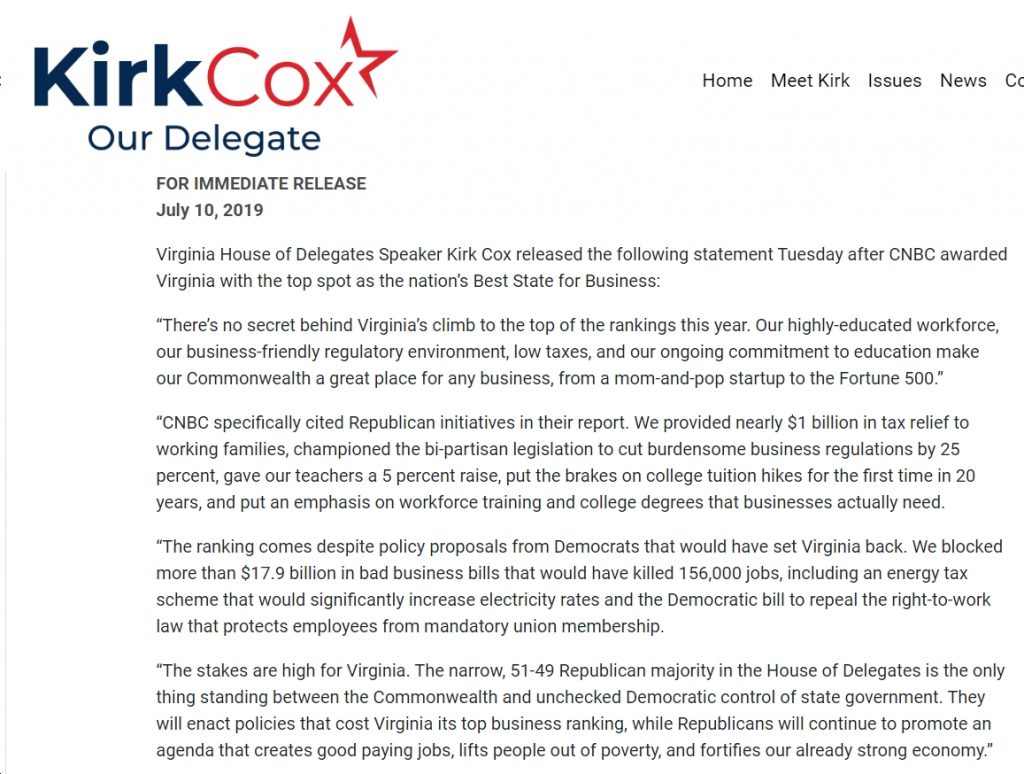