In the last several weeks, following years of discussion without action, a plan has emerged to create such a mental health docket for Arlington and the City of Falls Church, during the “lame duck” session before the new Commonwealth’s Attorney takes office. The current proposed plan applies to the district court, where only misdemeanor cases are heard. The application was due to be submitted July 1st to the Supreme Court, without any input from the public (or the incoming Commonwealth’s Attorney, for that matter); but at the request of local interested parties, the application has been pushed back and a public hearing has been scheduled.

Only the handful of people involved in drafting the application know the exact details of how the program would be structured, so it’s hard to know what to expect. But here are some questions one might have about the details of a mental health docket:

“Having a Cow” That Dairy-Industry-Backed Bill Barring use of “Milk” for Soy, Almond, Hemp, Flax, Oat, etc. Passed House of Delegates Committee 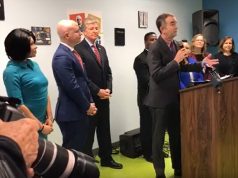 This should be fun. NOT! https://bluevirginia.us/2020/01/saturday-news-chinas-coronavirus-spreads-to-four-continents-with-cases-surging-head-on-a-pike-adam-schiffs-powerful-closing-argument-pompeo-curses-at-reporter-new-hope-for-st#comment-4771120345