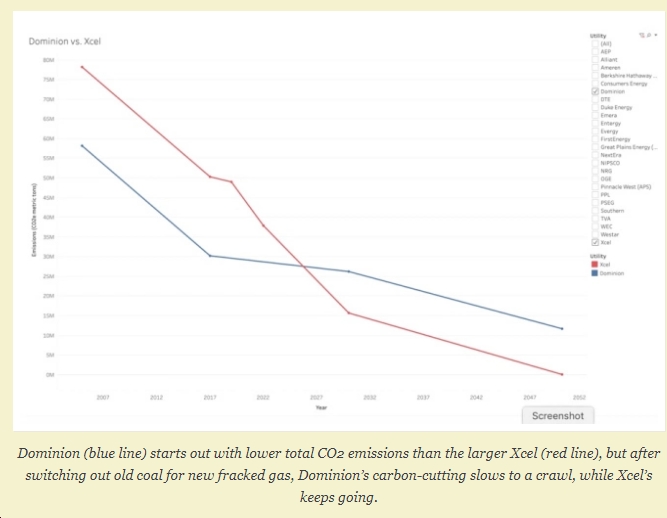 My readers will be shocked, shocked to learn that contrary to Dominion Energy’s propaganda, the company plans to cut carbon emissions by only about 1% per year between now and 2030, a slower pace than it has achieved in the past.

According to an analysis of Dominion’s own data by the Energy and Policy Institute, “the company reduced its carbon emissions at an average rate of 4% per year from 2005 to 2017, mostly by retiring coal plants in the later years of that period. That reduction rate plummets to 1% per year between now and 2030 under Dominion’s new goal.”

Fracked gas investments are both the reason Dominion has brought carbon emissions down as much as it has, and the reason it can’t keep up the pace. Closing expensive, old coal plants is an easy way to cut carbon and save money at the same time. Replace the output of a coal plant with the same output from a gas plant, and you’ve slashed carbon emissions almost in half overnight.

But it’s not such a great trick if it requires you to build a new gas plant with a useful life of 30 years. That makes it much harder to decarbonize further by replacing gas with carbon-free renewables.

This is exactly Dominion Energy Virginia’s problem. A comparison of the utility’s 2013 and 2018 integrated resource plans shows coal fell from 22% of the total energy mix to 18%, while natural gas jumped from 17% to 32%, displacing purchased energy as well as coal.

The company achieved this feat with three new, huge combined-cycle gas plants it brought online just in the past five years: Warren (1,370 MW) in 2014, Brunswick (1,358 MW) in 2016, and Greensville (1,588 MW) in 2018. Together these plants increased Dominion’s natural gas generating capacity by more than 50%.

Not only did Dominion stick utility ratepayers with these big new gas plants, its parent company promised investors the utility will burn enough gas to justify spending $7 billion-plus on the Atlantic Coast Pipeline. Decarbonizing violates the business plan.

Dominion is in good company — by which I mean bad company — in making bold claims about carbon cuts that prove inadequate on closer inspection. According to the Energy and Policy Institute, the other southeastern monopoly utilities, Duke, Southern, and NextEra, are all using the same playbook.

Other utilities have avoided the gas trap. National leaders like Minneapolis-based Xcel, Consumers Energy in Michigan, and NIPSCO in Indiana are replacing coal with renewables and leapfrogging over new gas. That puts them in a position to deliver on their promises of rapid emissions cuts.

Xcel Energy is one of the country’s largest electric utilities, with operations in eight states, primarily Colorado and Minnesota. Xcel pledged in December 2018 to reduce its carbon emissions 80 percent by 2030 from 2005 levels, and to fully decarbonize by 2050. Xcel’s new goal is an upgrade of a previous one to cut carbon emissions 60 percent by 2030. It says it plans to lean heavily on renewable energy and batteries will save its customers money. In a detailed reportreleased in March, Xcel says its goals fall within the range compatible with Intergovernmental Panel on Climate Change scenarios that achieve either a 2°C or 1.5°C target.

Another contrast you’ll notice between Xcel and Dominion: Dominion has no plans to get to zero emissions, ever. It’s hard not to conclude that the company’s leaders are simply putting the best climate face on a gas strategy that hasn’t changed.

Eventually, though, the falling costs of wind and solar and the public’s demand for climate action will force Dominion to follow Xcel and others into deep decarbonization.

It may not be the business plan, but it is the future.

This post was originally published in the Virginia Mercury on July 15, 2019.