People earning the minimum wage are long, long overdue for a raise, given that $7.25/hour is an absurdly low amount of money and that the minimum wage hasn’t been increased for a decade (since 2009). Not surprisingly, almost every Democrat – including every member of the Virginia delegation – voted yes, while almost every Republican – including every member of the Virginia delegation – voted no. Which, as usual, tells you a great deal about each party’s values, and why we need to embrace the former and reject the latter. Yet another example of why anyone who makes the argument that “both parties are the same” or “my vote doesn’t matter” are completely and wildly wrong.

See below for some reactions by Democratic House members from Virginia.

“For decades, Americans earning the minimum wage have watched the monetary value of their 40-hour work week plummet. Today’s single mom with two kids earning the federal minimum wage falls thousands of dollars below the poverty threshold. As our economy continues to evolve, hardworking Americans are being left behind, and this legislation would help reverse that trend.

“House Democrats promised to raise pay for workers, and today we kept that promise. I’m proud that we passed the Raise The Wage Act to give more than 33 million hardworking Americans a raise for the first time in a decade. This important bill will lift at least 1.3 million workers out of poverty, including 600,000 children. I urge my colleagues in the Senate to stand with American workers, pass this bill, and give them the raise they both need and deserve.”

The #RaisetheWage Act is good for employees, families, kids—and it’s good for our economy. pic.twitter.com/cLUhXy5Eyv

This is the longest period in history without an increase in the minimum wage. The #RaisetheWage Act will help #smallbiz save by lowering turnover rates & decreasing training of new replacement employees. This vital legislation will help small businesses and boost the economy. pic.twitter.com/Rl7JH0YdZ7 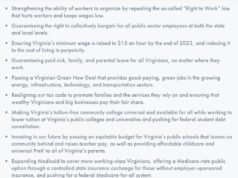