With a Special Session of the General Assembly on gun violence prevention coming up, and with the NRA holding super-secret “town halls” around Virginia to rile up their supporters, check out this Washington Post story about Virginia Republicans having a meltdown over the prospect of, among other things, Democrats passing commonsense gun violence prevention measures. Also check out the screen shots, below, for some reactions to the homophobic, offensive, obnoxious comments by State Sen. Bryce Reeves (R-SD17), about State Sen. Adam Ebbin (D-SD30), who is gay. Specifically, Reeves spewed out the following at one of the NRA no-media-allowed “town halls”:

“Ebbin is ‘from Northern Virginia. He’s really liberal left; he’s . . . the [only] openly gay senator in our Senate.” And Reeves said Ebbin’s agenda “means infanticide is coming, all the gun bills. We’re going to lose the right to work. . . . Minimum wage — just minimum will be $15, but I heard him talking about $20 to $25.'”

So yes, Sen. Adam Ebbin is from Northern Virginia; that is one of the only things Reeves said that’s actually accurate. As for Ebbin being a liberal, that is accurate as well, although I’d also point out that on issue after issue, Ebbin – NOT Reeves – is in the majority or plurality of Virginians and Americans, which by definition makes Ebbin CENTER not “left.”

Other than that, of course, this is all crap by right-wingnut and homophobe Reeves: a) no Democrat supports “infanticide,” that’s just far-right fear mongering lunacy; b) “right to work” is Orwellian language for anti-union, anti-worker laws in states around the country; c) I haven’t heard of any Democrat talking about raising the minimum wage higher than $15/hour, but the main point here is that Reeves and his party loooove giving tax breaks and other advantages to big corporations and wealthy individuals, but haven’t raised the minimum wage in a decade (!), from just $7.25/hour, which I dare Reeves or any of his colleagues to try to live on (quick calculation: 40 hours/week * $7.25/hour = $300/week, or approximately $16k per year).

One more point: Reeves currently (mis)represents a district Tim Kaine won with 52% of the vote last November, and where Ralph Northam got 49% in November 2017, so it’s a reddish-purple district but possibly winnable with a strong Democratic candidate and campaign. Fortunately, we’ve got a strong candidate in Amy Laufer – “served on the Charlottesville City School Board for seven years. She is the founder of Virginia’s List, an organization that supports Democratic women running for state office. Amy is a former middle school teacher and Peace Corps volunteer.” With Laufer, instead of Reeves, in the State Senate, we will get good laws that most Virginians support (and that will make us all safer and more prosperous), while ridding the State Senate of a right wingnut and homophobe.  No brainer, right? So yeah, let’s all help Laufer for Virginia defeat Reeves this November! 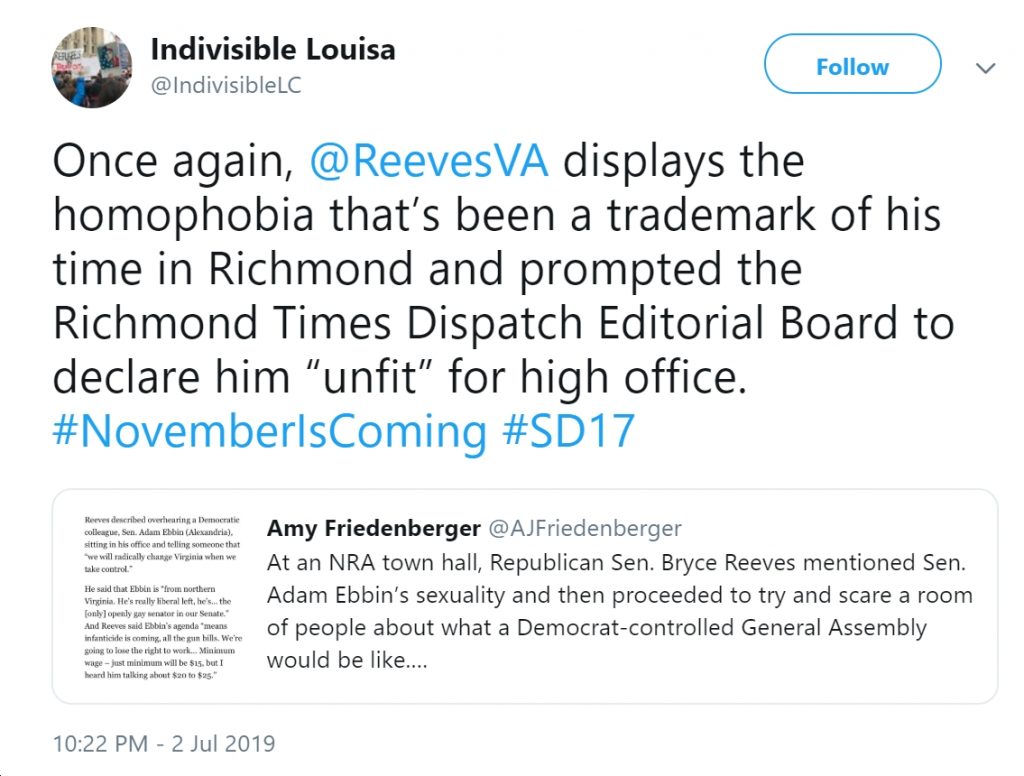 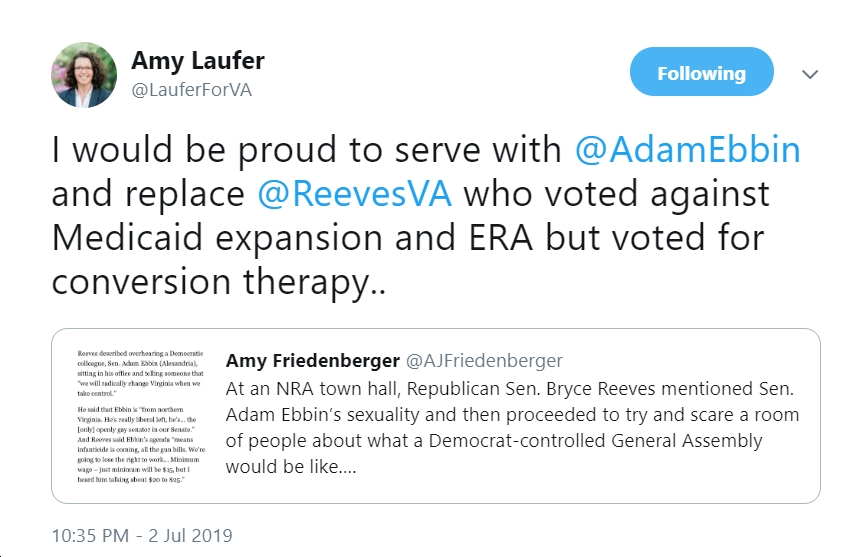 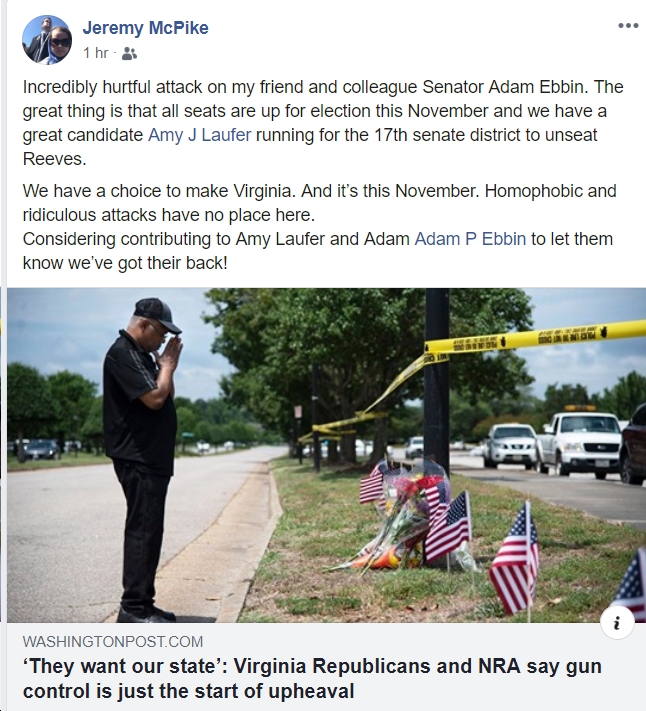 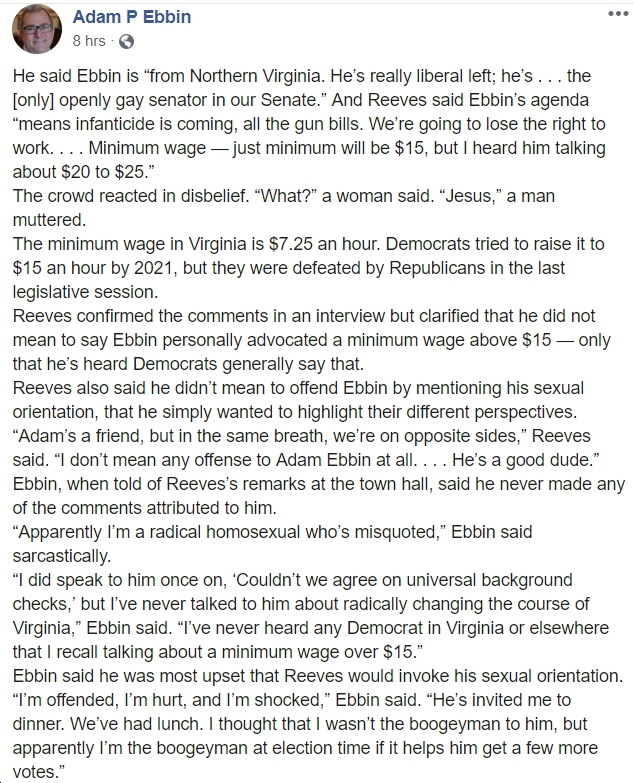 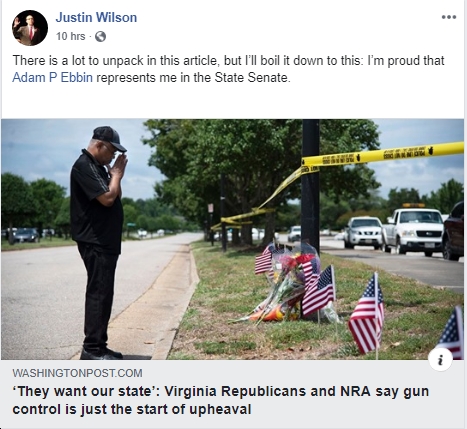 Right-Wing-Dominated Hanover County, VA School Board Strikes Again, as Speaker is Escorted Out By Police While Attempting to Speak Against Proposed Transgender Student Registry...