With the Arctic on fire, Greenland in the midst of a glacier-melting heat wave, and a climate-science-denying ignoramus and fossil-fuel industry tool in the White House, you might be up for some good news at this point. I know I am. Well, thanks to the latest from the U.S. Energy Information Administration, we’ve got some (note: bolding added by me for emphasis).

Between 2010 and the first quarter of 2019, U.S. power companies announced the retirement of more than 546 coal-fired power units, totaling about 102 gigawatts (GW) of generating capacity. Plant owners intend to retire another 17 GW of coal-fired capacity by 2025, according to the U.S. Energy Information Administration’s (EIA) Preliminary Monthly Electric Generator Inventory…

Coal-fired power plants in the United States remain under significant economic pressure. Many plant owners have retired their coal-fired units because of relatively flat electricity demand growth and increased competition from natural gas and renewables. In 2018, plant owners retired more than 13 GW of coal-fired generation capacity, which is the second-highest annual total for U.S. coal retirements in EIA’s dataset; the highest total for coal retirements, at 15 GW, occurred in 2015. 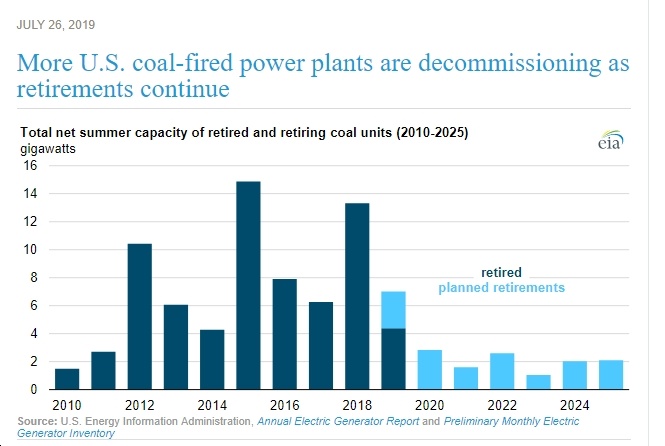 In short, as PV Magazine explains, “An analysis of coal plant retirements from the U.S. Department of Energy shows that more than 100 GW of coal-fired power plants have already retired this decade, as solar, wind and gas eat coal’s lunch.” And no, Trump isn’t saving coal, despite his absurd, anti-market, detached-from-economic-and-scientific-reality pledges to do so. Instead, as you can see from the following table (click to enlarge), U.S. coal-fired power generating capacity plunged by 60 gigawatts (GW) between 2011 and 2017, from 318 GW to 256 GW — with no end in sight (thank goodness) to this decline.

Meanwhile, non-hydro renewables (mostly wind and solar) jumped from 61 GW in 2011 to 131 GW in 2017. As a result, EIA estimates that in April 2019, U.S. electricity generation from renewable sources surpassed coal-fired power generation for the first time, as the country saw “record generation from wind and near-record generation from solar.” And no, this isn’t because some mythical “war on coal” waged by liberals or Barack Obama or whatever. To the contrary, if anything coal continues to be heavily subsidized in a wide variety of ways, including not accounting for its massive “negative externalities” (e.g., cooking the planet to death). In other words, if anything there’s been a continuing war on the environment and on clean energy, while fossil fuels have received hundreds of billions of dollars in taxpayer-funded corporate welfare.

But even with the government having showered advantages on the coal industry for decades, the fact is, coal is simply being out-competed, on the one hand by fracked gas (which is very bad from an environmental perspective as well, sad to say, and is actually a “bridge fuel…to nowhere”) and on the other hand by clean, increasingly cheap clean energy (e.g., solar, wind, efficiency). The result? As PV Magazine explains, “a study which Energy Innovation released in March…showed that it would be cheaper to replace 74% of U.S. coal with new wind and solar” and “further found that wind and/or solar cost at least 25% less for a whopping 94 GW of existing plants.”

As a result, according to EIA’s latest Short-Term Energy Outlook, coal is expected to fall to 23% of the U.S. electric generation mix in 2020, down 16 points from 39% in 2013. Replacing most of that dirty coal has been wind, solar and – unfortunately in most ways – natural gas. But again, the good news is that the cost of solar and wind power generation keeps on falling, so that as time goes by, it really will make no sense to install anything else, plus of course energy efficiency. Which is good news, of course, except for the fact that we’ve just about run out of time to deal with climate disaster. 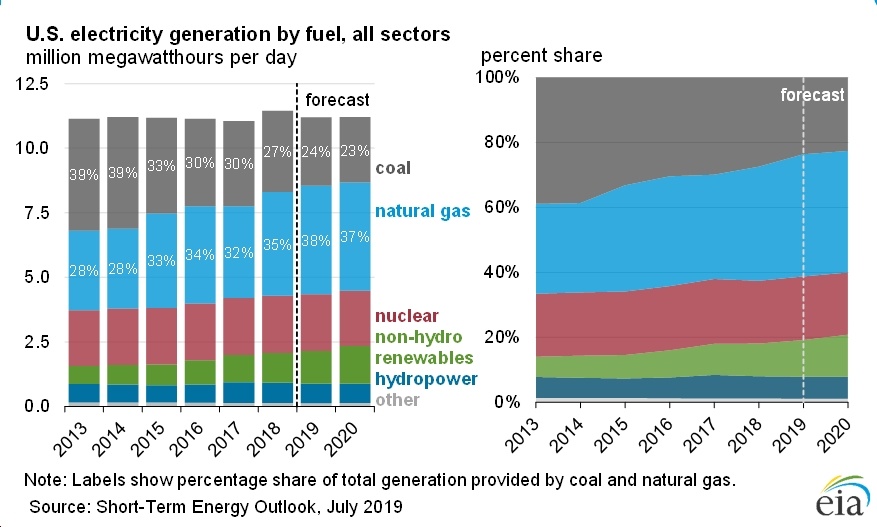 How to accelerate the transition to 100% clean energy in time to stave off the worst of climate-geddon? I’d recommend at least a few courses of action, if not at the federal level (at least right now, with the corrupt ignoramuses in charge), then at the state, local and corporate levels:

Oh yeah, and definitely do NOT do what Republicans just did in Ohio, which is to pass “the worst energy bill of the 21st century.”  Of course, as David Roberts of Vox correctly points out, the only way to make sure insane idiocy like this doesn’t happen in Virginia or any other state is simply this:

“The GOP has become a fully purchased subsidiary of big energy incumbents. States that want to move forward on climate change and clean energy have no choice but to override Republicans or vote them out of office.”

Here in Virginia, we can start in about 100 days, by going to the polls and voting Democratic up and down the ballot. The planet you save might be your own. Let’s do it.

P.S. Oh, and needless to say, future presidential debates need to make the climate crisis a major topic of discussion, including of course at least one DNC-sponsored debate solely dedicated to this existential issue.