Still don’t believe that your vote – and your political activism -matters? Consider the case of the appalling Ken Cuccinelli – the same guy who compared immigrant families to “rats” – whose political career likely came within just 93 votes (see below) of ending on November 6, 2007. Unfortunately, because not enough people bothered to show up and vote, “The Cooch”‘s career continued…putting him in the position to do enormous damage to Virginia and the country as State Senator, Attorney General and now as acting Director of Citizenship and Immigration Services in the Trump administration.

Recall, by the way, that the 2007 election was in the same “off-odd-year” cycle as we’re currently in (2007, 2011, 2015, 2019), when there were no statewide or federal races on the ballot, but “only” (in air quotes) the entire Virginia General Assembly and many important local offices. Also recall that these “off-odd-year” elections see by far the lowest turnout in Virginia’s four-year political cycle. For instance, in that year’s SD37 race, between Cuccinelli and Democrat Janet Oleszek, there were only 37,112 votes cast on election day. That’s about 20,000 fewer votes than the 57,001 votes cast in the 2017 gubernatorial election in 2017 between Democrat Ralph Northam and Republican Ed Gillespie. Not coincidentally, note that Northam beat Gillespie in SD37 by a nearly 2:1 margin (37,965-19,036) in 2017, compared to Oleszek’s 92-vote loss to Cuccinelli in 2007. So sure, SD37 was somewhat more Democratic in 2017 (due to redistricting in 2011) than it was in 2007, but still…you get the idea, namely that “when we vote, we win” (big time, in this case) and “when we don’t vote, we lose” (narrowly, in this case).

Some of us, by the way, were busy working our butts off back in 2007 (yes, loooong before Trump came along) to try to help Oleszek win that race. For instance, back on 8/30/07, I posted about a fundraiser for Oleszek with then-Gov. Tim Kaine. Also check out this post from 10/9/07, in which Oleszek called out Cuccinelli for having “done some things in Richmond which are downright embarrassing, proposing legislation that would do more harm than good.” And, of course, recall that this race was so close that Oleszek requested a recount. So again, don’t ever let anyone tell you that voting and activism don’t matter, because in the case of Oleszek vs. Cuccinelli, it clearly did — and not just for that race, but for whether the career of the far-right, xenophobic, homophobic, climate science denying Cuccinelli would continue. 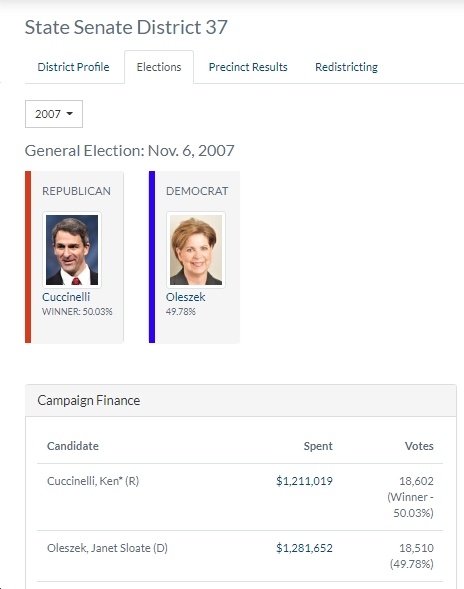