by a contributor from Loudoun County

Former Republican Party of Virginia Chair John Whitbeck continues his efforts to hide his real intentions for Loudoun County in his bid for Chairman of the Board of Supervisors.  As yet another example in a long history of obfuscation chronicled in Blue Virginia, Whitbeck now is trying to hide the developers that are pulling his strings.  Local Loudoun papers have already reported Whitbeck’s sizeable fundraising from out of town donors, but what is even more disturbing is that a Loudoun developer seems to have coordinated with Whitbeck to hide the largest single donation to Whitbeck’s campaign from prominent Loudoun developer, David Gregory.

The fact that developers contribute to local elections is not new. However funneling campaign contributions via a Federal Political Action Committee is not often done.  In off year cycles, Federal PACs are only required to file twice a year as opposed to quarterly filing requirements for state PACs.  Federal PAC contributors do not show up in state level reports and the underlying contributors to that PAC are not available to the state or transparency tools available to voters such as the Virginia Public Access Project. 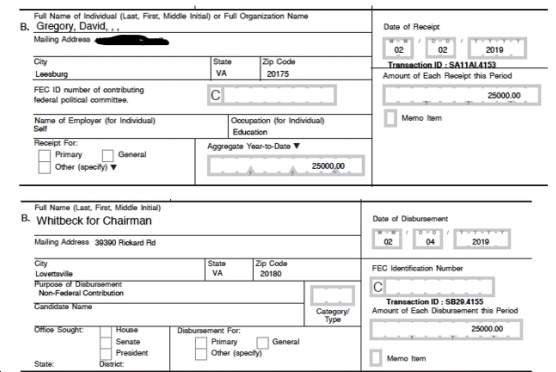 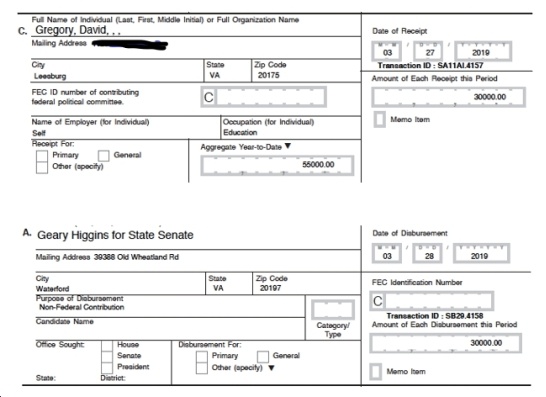 Chris Marston, who is an established Republican consultant who manages approximately 105 active federal PACs, is listed as the Treasurer for this PAC.  Conservatives for Effective Government was used as a pass-through for big money in order to obfuscate donations in 2016 in Tennessee.

The question remains as to why Whitbeck wants to hide his relationship with David Gregory.  Perhaps it’s because Whitbeck has tried to cast himself as someone who is committed to “preserving the rural west,” yet it’s hard for him to run on this theme if he’s been paid off by David Gregory – who has fought to build, build, build in Loudoun. The truth is that the unfettered growth that has frustrated Loudoun residents was a gift from developers and from the Republican-led Board of Supervisors.  And, the truth is, John Whitbeck’s blatant lie is just further evidence that he will continue to pave over paradise and put in a parking lot. Or in the case of Loudoun, another data center or stucco’d McMansion.