FAIRFAX, Va. – The Fairfax County NAACP, along with much of the nation, was outraged at the reported attack on Amari Allen at Immanuel Christian School in Springfield, Va., last week. We take every allegation of racial violence seriously and we treated this incident the same. Regrettably, in this instance, the reported assault turned out to be false, and the Allen family is working with the school to achieve a resolution. We would like to thank the Fairfax County Police for their quick action in opening an investigation into the matter, and to the school for being forthcoming and open throughout this process.

Amari is not a public figure. She is a young girl who made a mistake, and we are asking everyone, supporters and critics alike, to please respect the family’s privacy at this time. Her family has released a statement to the Washington Post apologizing to the other students she accused, and her school, and the community.

Too often in these rare instances of fabricated hate crimes, critics use a broad brush to claim racially motivated crimes are virtually non-existent. This is demonstrably wrong. Data from numerous sources, including the Anti-Defamation League, the FBI, and the Justice Department, shows bias motivated crimes are on the rise, year over year. The fact is that these type of fabrications are isolated incidents, but the public and media has a tendency to sensationalize falsifications over the thousands of real hate crimes reported every year.

The Fairfax NAACP remains committed to the ongoing conversation around race in our community, and stands prepared to assist victims seeking justice. 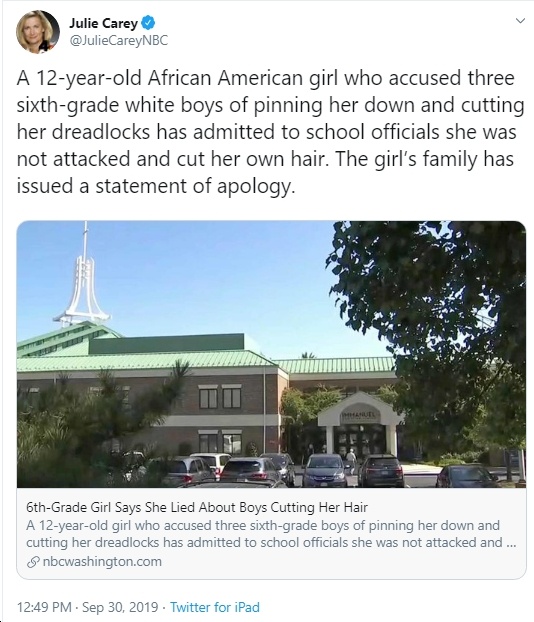 The following statement is from the Fairfax NAACP regarding this appalling story:

Fairfax County police are investigating an alleged attack on a sixth-grade girl by three boys Monday at the private Christian school they attend in Springfield, Va.

The 12-year-old girl, who is African American, told police that three white sixth-grade classmates held her down, covered her mouth, called her insulting names and used scissors to cut several of her dreadlocks from her head during recess in the playground at Immanuel Christian School.

FAIRFAX, Va. – The Fairfax County NAACP is closely monitoring the situation at Immanuel Christian School in Springfield, Va. We would like to know what the school’s existing policy is on racism and bullying. We also expect the administration to take immediate disciplinary action against the students in question.

Black students are too often the victims of racial bullying that is ignored or handled improperly. Amari Allen alleges she was bullied since the beginning of the school year without any action being taken. According to Amari’s account, the bullying escalated to a brutal, racist assault on a young girl by group of boys who previously harassed her without consequences.

Immanuel Christian School must stand up for its students and immediately institute a zero tolerance policy for racism, discrimination, and harassment, especially when it rises to the level of assault.

In many ways, Fairfax County is a progressive and welcoming place to live. However, in the shadow of schools, highways, and institutions named after slavers, people of color have been targeted for discrimination and harassment far too often. The Fairfax NAACP is already investigating at least two alleged racist incidents at Herndon Middle School where the administration did not follow the district’s bullying policy.

In a community as diverse as ours, children should be able to attend school without the fear of racist bullying, and focus on their education. Students must also have confidence that school administrators—public or private—will enforce their policies to protect them. Amari Allen, a straight A student and violinist, should be able to return to the school she loves tomorrow with the support of her fellow students, teachers, and faculty