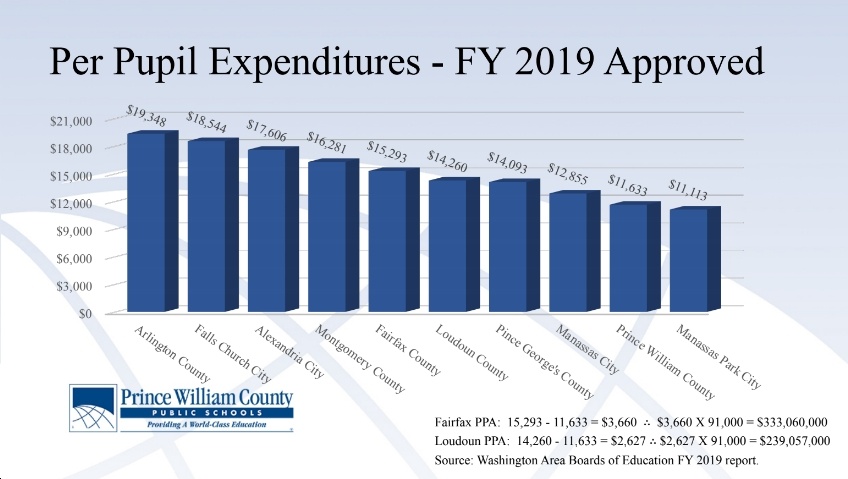 In last week’s Prince William County School Board debate (see here for video), School Board Chair Babur Lateef (D) noted, correctly, that Prince William County is among the lowest counties in Northern Virginia in terms of per-pupil spending (see graphic; click to enlarge). This, of course, is due directly to the actions – and inactions – of the Republican-controlled Board of County Supervisors over the past decade-plus. 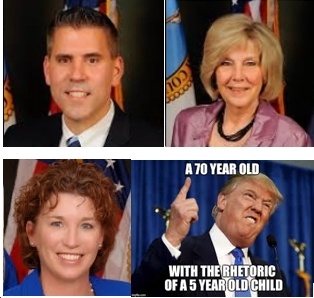 That Republican-controlled board has, among other things, neglected and underfunded the Prince William County public schools. Today, the County Board’s Republicans – people like  Ruth Anderson (R-Occoquan), Jeanine Lawson (R-Brentsville), and Pete Candland (R-Gainsville) – continue to abdicate responsibility for funding the schools’ and students’ critical needs. This has led to the most overcrowded classrooms and the lowest-paid teachers in the region. Needless to say, this is not a recipe for success. Thanks a lot – for nothing – Prince William County Republican Supervisors!

Fortunately, we have elections on November 5 for the entire Prince William Board of County Supervisors, as well as for the School Board. This gives Prince William County voters a golden opportunity to change direction from the failed policies of Republicans, when it comes to education and so many other areas, by voting Democratic up and down the ballot. Note that all the Democrats running for County Board in this year’s election – Kenny Boddye in Occoquan, Raheel Sheikh in Coles, Maggie Hansford in Brentsville, Danny Funderburk in Gainesville, Andrea Bailey in Potomac, Victor Angry in Neabsco and Margaret Franklin in Woodbridge and Ann Wheeler for Chair – are committed to fully funding Prince William County public schools, to reducing overcrowded classrooms and to recruiting/retaining great teachers. Which is why they’re all great choices for voters on November 5.

In stark contrast, Republicans like Ruth Anderson, Jeanine Lawson, and Pete Candland appear to have been on a crusade to harm the public schools – to underfund them, to ensure classroom overcrowding, and to drive away the best teachers from the county.  Certainly, these same people cannot be counted on to move the Prince William County public school system (or the county in general) forward. Instead, if reelected, it is far more likely that they will continue to push Donald Trump-like policies and Betsy Devos-like neglect of the schools that we’ve seen for years under their “leadership” (in air quotes).

By the way, instead of being embarrassed about their record of failure, it appears that Prince William County Republicans are laughably trying to blame Democrats for problems in the schools that *they caused*. For instance, see the Republican nominee for County Board Chair’s Facebook post, in which he absurdly and falsely charged that Democrats – the same people, again, who have NOT been in control of the County Board for ages! – are somehow responsible for overcrowding in the Prince William County public school system.  The brazenness of this claim is very Trump-like, when you think about it. For instance, Trump loves to blame the Senate for not confirming his nominees, even though that body has been controlled by Republicans since the beginning of the Trump presidency. But, as usual with Republicans, they never want to take responsibility for their own actions and inactions, but instead prefer to flail around trying to blame others.

Anyway, the bottom line is that it’s long past time for Prince William County to elect a Board of County Supervisors that’s competent, capable, and that cares about public education. That means voting Democratic up and down the ballot – for Board of County Supervisors (see candidates, above), School Board (including reelection of Chair Babur Lateef), Josh King for Sheriff, Amy Ashworth for Commonwealth’s Attorney, and of course Democrats for State Senate and House of Delegates.