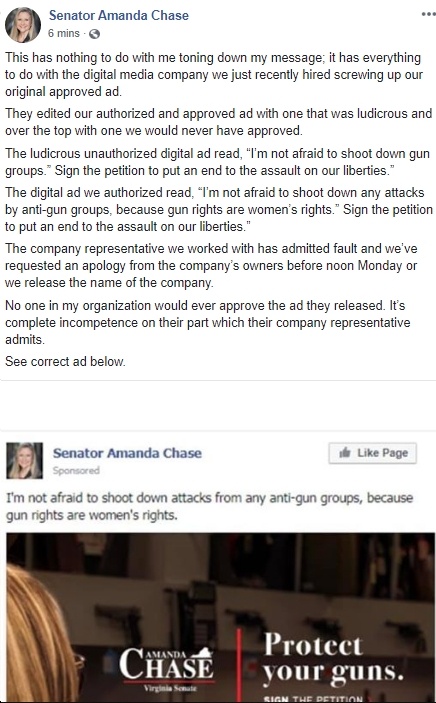 The other day, as you may recall, Democratic SD11 nominee Amanda Pohl called out incumbent Sen. Amanda Chase (R-NRA) for her “disturbing” “extremism,” “rhetoric and threats,” following Chase’s campaign running a Facebook ad claiming she’s “not afraid to shoot down gun groups.”  Many others also condemned Chase for using that type of language. In response, Chase’s campaign pulled the ad, with Chase posting yesterday on her Facebook page:

This has nothing to do with me toning down my message; it has everything to do with the digital media company we just recently hired screwing up our original approved ad.

They edited our authorized and approved ad with one that was ludicrous and over the top with one we would never have approved.

The ludicrous unauthorized digital ad read, “I’m not afraid to shoot down gun groups.” Sign the petition to put an end to the assault on our liberties.”

The digital ad we authorized read, “I’m not afraid to shoot down any attacks by anti-gun groups, because gun rights are women’s rights.” Sign the petition to put an end to the assault on our liberties.”

The company representative we worked with has admitted fault and we’ve requested an apology from the company’s owners before noon Monday or we release the name of the company.

No one in my organization would ever approve the ad they released. It’s complete incompetence on their part which their company representative admits.

In response, people have so far left 368 comments, many of which are…well, see for yourself; here are some of the top-rated ones. (note: a common theme is Chase’s complete inability/unwillingness to ever take any responsibility for her own actions, and always to blame someone else for her screwups)