See below for comments on the 9/11/01 terrorist attack’s 18th anniversary from Virginia elected officials. I’ll add more as I see them. Of course, like everyone else who lived through it, I’ll never forget that horrible day. I was at work at the U.S. Department of Energy when the news started trickling in. Then, after we were all told to go home, I remember riding an absolutely silent Metro car back to Arlington, then watching for hours – in shock and horror – the surreal images on TV. Here in Virginia, of course, the 9/11 attacks hit particularly close to home, given that the Pentagon is located in Arlington. In some ways, it really doesn’t feel like 18 years have gone by, but in others it actually does feel like 9/11/01 was a lifetime ago – literally, in the case of anyone who is 18 or younger today. To them, I guess it’s history, albeit history that their parents, grandparents, etc. all experienced as it happened.

“I’m at the Arlington County Government’s 9/11 remembrance event to commemorate the lives lost on September 11th, 2001. Today, we thank all who responded to the attacks and cared for victims. #NeverForget”

“Eighteen years ago today, I was standing watch in the reactor plant aboard USS HARRY S TRUMAN in Norfolk Naval Shipyard. As news began to trickle down to us of the horrific attacks, I couldn’t wrap my head around what had happened until someone said “we are at war.” These words resonate with every woman and man in uniform. That night, I tore up the letter of resignation I had recently written and spent the next 16 years fighting that same war. Never forget those innocent lives lost that day and the thousands of soldiers, sailors, airmen, marines, and coastguardsmen who have given their lives since to protect our freedom.”

“18 years ago more than 3,000 lives were taken in an evil and heinous attack. Today we commemorate and remember this horrific tragedy. In the ensuring years, almost 10,000 additional people have been diagnosed with 9/11 related cancer. Let us honor the memories of those who perished and also remember the spirit of solace and service that brought Americans together. We must never forget the victims, their families and our first responders who demonstrated immense heroism that day and in the aftermath.” 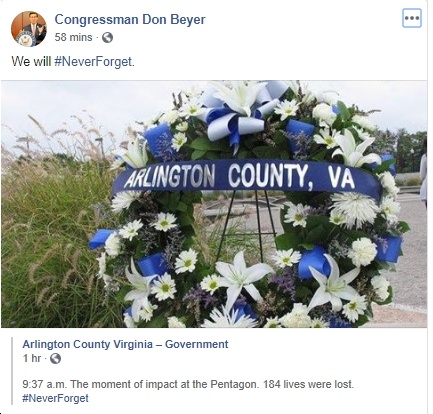 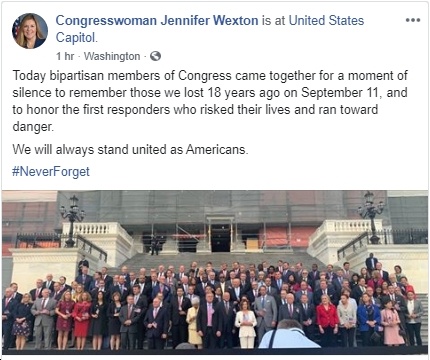 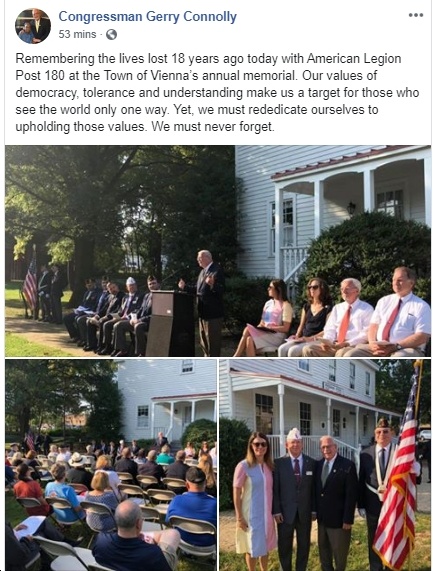 Today, on September 11th, we again remember and honor the precious lives lost eighteen years ago in New York, here in the Commonwealth, and Pennsylvania. We are also thankful for the incredible first responders who risked their lives to save so many. We will never forget. pic.twitter.com/lLhBf54CCi

Also, in the spirit of national unity we saw on 9/11, here are some Republican elected officials.

“Today, we remember the service and sacrifice of all the first responders and law enforcement officers who gave their lives 18 years ago today. We also remember the legacy of all who perished in the terrorist attacks on 9/11. Please say a prayer today in their memory.

I was proud to support the Permanent Authorization of the September 11th Victim Compensation Fund Act earlier this year to provide the necessary funds for all those affected on that fateful day for decades to come. We came together that day as a nation, and together, we continue to move forward.”

“This morning I participated in a moment of silence in memory of all who lost their lives on this day eighteen years ago.”