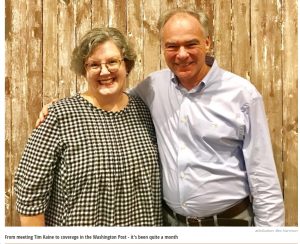 I’ve been bucking the system for quite some time now.  Call time made me extremely uncomfortable so I found other ways to fund raise.  I didn’t have enough money for a campaign manager — except for one glorious month — so the bulk of this campaign I’ve been in both roles.  And working full-time which means I eat, sleep, and breathe this race.

When I discovered that voter outreach would cost more than my entire budget, I became part of the Rural GroundGame and today we are in the Washington Post.  As get-it-done rural candidates, the ten of us are working together to make voter outreach affordable to our rural campaigns. Without these important services, it would be near impossible to effectively contact potential voters.  And what’s the point in running for office if you can’t identify your voters?

But it’s not just about voter outreach. As candidates and staff we share information, resources, and every day moral support. Our 9:00 pm candidate video conference call is the often the highlight of my week. Running for office is so much harder than I had imagined it would be. Working with 9 other campaigns lightens all of our loads and allows us to share our successes.

And then I had my interview with Progressives Everywhere who aptly titled it Beverly Harrison is putting it on the line to change Virginia.

The stakes are high out here. You’re going to lose friends, you’re going to be ostracized,” Harrison tells Progressives Everywhere. “You’re probably gonna get some hate mail and ridiculed if you lose. That probably happens in a lot of places, but in the country, where we all end up at the same Walmart or the Food Lion every day, it’s very personal. I have Republican supporters who will not publicly acknowledge they support me, nor will they put up a sign in their front yard. When you run for office, you’re putting your name out there.

But wait, there’s more!  Last week I attended a candidate forum with my opponent, the Majority Leader in Virginia’s House of Delegates.  He clearly was not expecting to be held accountable for his voting record.  The ERA, guns, campaign finance, abortion — it all got held up for a good look.

I started my campaign diary with this post, discovered the secret sauce to rural races, and am now just weeks away from what will surely be a blow out ending to a truly wild ride with more than one chance in hell at winning this election.

Video, Live Blog: Tonight’s (First) Virginia Gubernatorial Debate Between Terry McAuliffe and Glenn Youngkin (The debate is being hosted by the Appalachian School of Law in Grundy and moderated by Susan Page of USA Today) https://bluevirginia.us/2021/09/video-links-to-watch-thursday-nights-first-virginia-gubernatorial-debate-between-terry-mcauliffe-and-glenn-youngkin