If it’s Friday, it must be Flip-A-District Friday, courtesy of Del. Rip Sullivan’s Project Blue Dominion. This week, the focus is on a “quick overview of the GOP strategy to hold the House and Senate,” which is basically “pretending to be moderates, they have never heard of “President Trump,” and they would appreciate it very much if you wouldn’t bring up their voting record…”

Welcome to this week’s issue of our “Flip-a-District” series, where we are going to do a quick overview of the GOP strategy to hold the House and Senate.

In January, Richmond Times-Dispatch columnist Jeff Shapiro previewed their approach in an op-ed titled: “Looking for a win, Republicans try something different: looking like Democrats.”

After refusing to listen to Virginians for years on important issues like gun safety and health care, Republicans are trying to pretend that they were fighting the good fight all along. It’s a deeply desperate strategy given that voters — even those who don’t pay close attention to state politics — have long memories and are unlikely to forget which party stands where on the issues they care about most.

Yet here we are. Republicans are pretending to be moderates, they have never heard of “President Trump,” and they would appreciate it very much if you wouldn’t bring up their voting record…

“Republican Party? Never heard of it.” 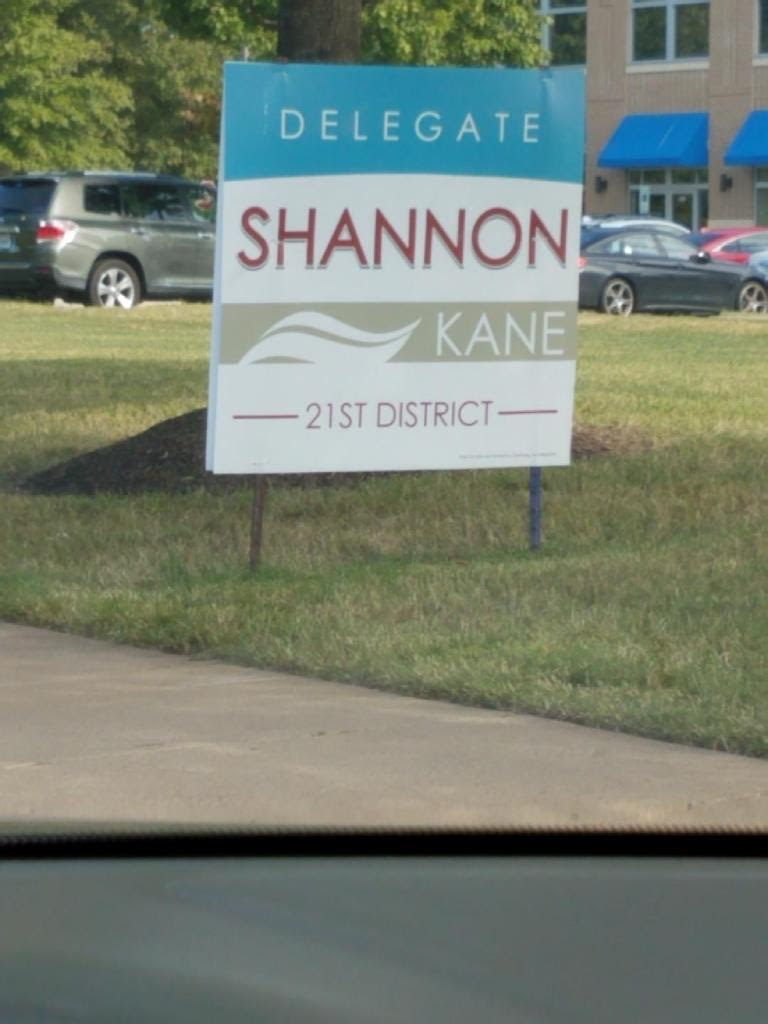 One of the simplest ways Republicans are trying to hide their true colors is by doing just that — hiding the fact that they are running as members of the GOP, often by eschewing traditionally Republican red colors in favor of more benign shades like green or even blue.

Here are a few examples of these confusing, uninformative signs. You’ll notice a couple of interesting details. Republican Shannon Kane’s sign implies that she is already a delegate — she is not, and her opponent is incumbent Delegate Kelly Fowler (D).

Below is a photograph with signs including those of Republican House of Delegates candidates DJ Jordan, Heather Mitchell, and Rich Anderson. Their signs are remarkably scrubbed of any party affiliation, and Mitchell’s even comes close to copying the same misleading technique that Shannon Kane uses to try to give the impression that she is the incumbent Delegate. 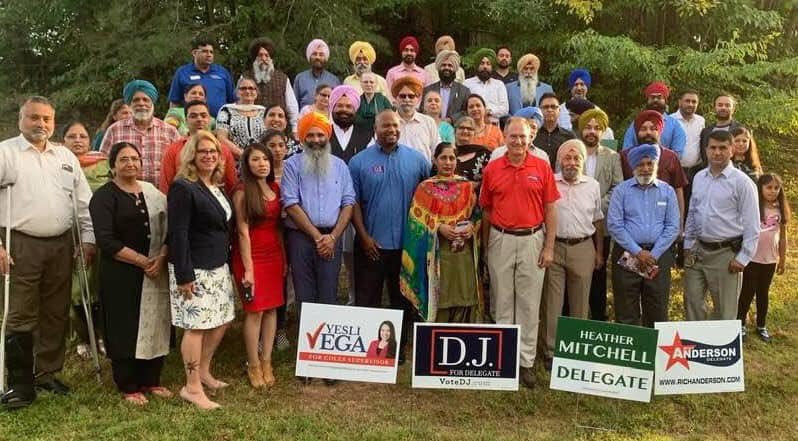 Some Republicans have gone so far as refusing to mention their party affiliation anywhere so voters have to do the extra work. From Mary Margaret Kastelberg (running against Rodney Willett in HD-73) to Forrest Hite (running against Delegate Chris Hurst in HD-12), Republicans in competitive districts are simply unable to make the case that they could better represent the area than Democrats, instead creating websites, publishing grip cards, and giving interviews completely devoid of substance.

Several GOP candidates seem so terrified of the issues where the parties split that they can only squeak out a few bland talking points like “I believe that every child deserves the opportunity to receive a high-quality education” and “people want solutions and leadership.” Talking points come with the political territory, but when a candidate’s literature and website are all statements that everyone can agree on, it’s unhelpful and sometimes even misleading to voters.

Luckily, Democrats have been able to make clear distinctions between our candidates and Republicans when talking to Virginians. The Republicans’ attempts to misdirect and confuse will not work.

There are few issues that come with longer voting records for incumbents than Medicaid expansion. After the Affordable Care Act gave states the opportunity to expand this life-saving program, Democrats tried year after year to provide coverage to what was estimated to be about 400,000 people in Virginia. Republicans, in turn, voted year after year and are on the record — all of them — opposing it.

The GOP ignored data from other states that had successfully expanded the program and instead spread misinformation about looming tax hikes and rationed care. The 2017 elections, which netted Democrats an additional 15 seats in the House, paired with extensive polling on the subject showed how popular the Democratic priority of expansion was to Virginians. Only after years of intransigence and “nay” votes did a tiny handful of Republicans finally agree to let Medicaid expand in Virginia.

The worst offender here is Chris Jones (R), whom we discussed in Volume IX. Jones blocked expansion for years as the powerful Chairman of the Appropriations Committee until it became an untenable, clearly unpopular position. Jones is now running ads on television claiming that he “led the fight to expand Medicaid.” This comes after “the Washington Post…recognized him as ‘a leader in the fight against Medicaid expansion’ as he fought to remove Medicaid expansion from a 2014 budget.”

This kind of misleading ad from Jones’ campaign is exactly the kind of tactic that Shapiro predicted — Republicans running as Democrats — but it doesn’t make it any less bizarre. Hopefully voters won’t be fooled, and will see through his diversion on November 5.

It’s a toss up as to whether this or the previous issue is more frustrating. Like Jones and his last-minute turn on Medicaid expansion, a handful of embattled Republicans are shockingly trying to claim that they support gun safety reform. Unlike Medicaid expansion, however, the GOP in Virginia has steadfastly refused to budge on this issue yet.

First, a quick rundown of what happened this year: first, all gun safety legislation was swiftly killed by the Republican-led Militia, Police, and Public Safety Committee so that no Republicans in tough districts would have to choose between the NRA and the preferences of the vast majority of Virginians. After the regular session concluded, Governor Ralph Northam called for a Special Session of the General Assembly to tackle gun violence after the shooting in Virginia Beach. At the Special Session, Republicans refused to hold any votes or allow any debate, instead kicking all bills to the Crime Commission “for review.” In a truly crass political move, Republican leadership insisted that any votes on gun safety would have to wait until after the November 5th elections.

Republicans — every one of them — all backed leadership and went along happily with the plan to kill all hope of gun safety reform before November. Lives are on the line, but that appears to matter less to Republicans than being able to bring in money from the NRA ($200,000 on September 3rd to Speaker Cox’s leadership PAC) and turn out the most extreme members of their base.

Shockingly, a few Republican members are now pretending to have been champions for gun safety all along. Tim Hugo, who has a solid “A” rating from the NRA, recently claimed to have “consistently voted” for gun safety bills. He claims to support red flag laws now. As the patron of the only red flag law proposal in the Virginia House, I can assure you that I have never heard a word of support from Tim Hugo, who has used his position as the Republican Caucus Chair to make other Republican Delegates toe the NRA line. The bill he and others now claim to support is NOT a red flag bill. This very recent faux epiphany on gun safety is not surprising, though it is a baldly political move — Hugo is facing Democrat Dan Helmer on November 5th and Helmer is running an excellent, well-funded, grassroots campaign.

The same can be said for Republicans like David Yancey and Glenn Davis, who have both now claimed to support a red flag bill and have made faint gestures in the direction of supporting extremely limited gun safety legislation only after being faced by determined Democrats on the campaign trail. Their sudden, supposed about-face on gun safety is a sign of desperation, not leadership, and their voting records and years of complacency speak louder than last-ditch fake positions.

That’s it for Volume XVII and for this year’s Flip-a-District series. I encourage you to review this email and past editions to find a candidate or candidates whom you would like to support with your time or financial resources. It’s now or never.

Yikes, this is horrible. Make sure you vote, starting today, *Democratic* up and down the ballot, and do NOT let Republicans put more guys like this on the bench going forward! https://bluevirginia.us/2021/09/friday-news-the-most-important-statistic-of-the-biden-presidency-the-right-wing-media-is-helping-trump-destroy-democracy-a-new-poll-shows-how-ohio-house-republican-calling-trump#comment-5538089954 h/t @SallyLHudson