UPDATE 10/26: Note from the organizers – “Sorry folks-the World Series killed us.  Conflicts caused a talent loss. So we’ll have to try again at a later date. Thanks for your understanding.”

Given current Trump administration policies and the ugly political climate victimizing our country’s immigrant communities, it’s sadly unsurprising that there’s a growing fear about showing up to vote. Some Virginia “English as a Second Language” (ESL) voters could even fear that this will cause backlash in other parts of their lives. That’s why, today, we’d like to remind folks that with all the outside money pouring in for the Nov. 5th Virginia election, there’s still a need to message to these communities so that our ESL voters feel empowered at the polls.

Along those lines, comedians Aida Rodriguez, Steve Byrne and Michael Ian Black have committed their time and talent to raise $ for just that purpose. The fact is, there are many races where there won’t be ballots in needed languages, and campaigns can’t afford to buy messaging to all the minority populations that will impact outcome. But this 2-19 “Humor for Humanity” event will fill many of those gaps. “Humor for Humanity” will fund statewide messaging to Chinese, Latino, Filipino, South Asian and other ESL minority groups.

If you care about gun control, passing the ERA, improving minority business initiatives, increasing access to universal pre-K, protecting our environment, etc. – well, guess what? So do ESL voters. But it helps them to see Democratic messaging directly in their communities.  The sooner this show sells out, the sooner the messaging campaigns can launch. 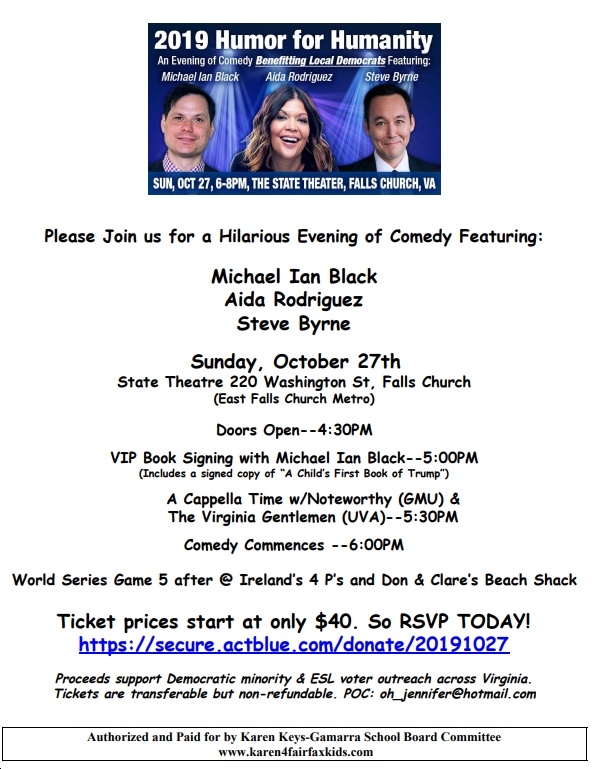