The Virginia GOP seems to be in a very odd predicament. They have insisted on digging in their heels and clinging to some really unpopular positions, on issues like gun violence prevention, addressing climate change, women’s equality, LBGTQ discrimination, worker’s rights, and more. Despite losing 15 seats in the House of Delegates in 2017 on these issues, they have continued to use their stacked sub-committees to block important legislation that a majority of Virginians support. In a time when moderation and working across the aisle with Democrats might seem to have been in order, the Republicans have swung to the right instead.

But now, with campaign time rolling around, the Republicans are SCARED. Because the Virginia GOP is about to lose control of the legislature–and with Democrats already controlling the Governor’s mansion, that spells a huge opportunity for Democrats to pass “a generation’s worth of legislation” (as House Whip Alfonso Lopez has said). Universal background checks, ERA ratification, joining RGGI, raising the minimum wage, banning discrimination, and so much more.

So now suddenly the GOP candidates are trying to hide their extremist, obstructionist views. All across the state, giant yard signs in pretty blue and green colors have popped up, with no party affiliation included. I mean, I totally get it; I’d be completely embarrassed to admit that I was a Republican too, given how completely out of touch with Virginia voters they are. But here’s why they’re in a funny position–the crazy radical groups like the NRA who’ve cowed the Virginia GOP into maintaining these extreme and unpopular positions are still involved with their campaigns.

So we end up with this this pretty little piece of lit I saw today while canvassing for HD28 Democratic nominee Josh Cole in Fredericksburg, from his challenger, Republican Paul Milde, the GOP candidate who casually shared an anti-Semitic meme, who wants to repeal the Medicaid expansion that has brought health care to 300,000 Virginians, who thinks that we shouldn’t “tinker with” gun laws: 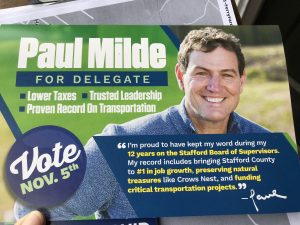 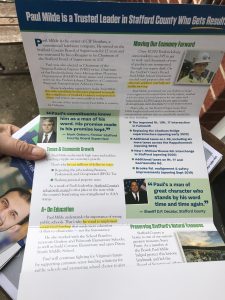 There are many many words on this flyer. But do you know what word is not anywhere to be found on it? That’s right, nowhere does it say that Paul Milde is a Republican! He talks about the importance of public schools, and about “preserving natural treasures”–sounds like a moderate or maybe and Independent, right?

But also while canvassing today, I saw THIS not so pretty piece of lit, paid for by the NRA (left at the door of a voter identified in VAN as a strong Democrat, and who confirmed as much when she opened the door to me): 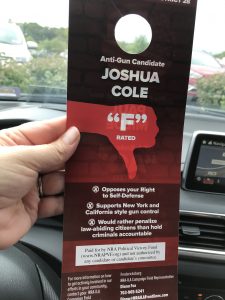 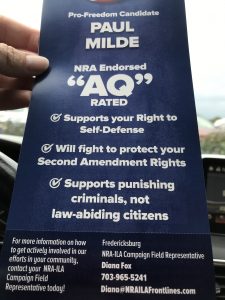 Not quite the roses and sunshine and moderateness of the other lit, right? This is the state of chaos and panic the Virginia GOP is in, swinging back and forth from trying to sound mild and moderate to digging into their extreme positions to cater to their crazy conservative base. Swinging from ice cream trucks and moonbounces and positive messaging, to attack ads. This is a losing strategy–if voters know nothing else, they know when you don’t stand for anything, when your values are as disposable as your lit.