I have to say, I’m getting pretty sick and tired of these anti-Semitic tropes. I’m far from the most observant Jew, but one of the main things that still ties me to Judaism (aside from the food) is the concept of tikkun olam, our duty to repair and heal the world, to help the helpless, to serve the underserved, to bring about social justice. I can’t say for sure that’s why Michael Bloomberg and George Soros do the kinds of philanthropy they do, but these criticisms of “dark money” (when it’s fully transparent and everyone can name its source) and “puppetmasters” strikes me as an insult to the core of Judaism. 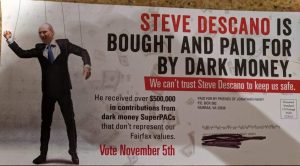 I’ve been heavily involved in the Commonwealth’s Attorney races from day one. When we first started knocking doors during the primary, voters had no idea what a CA was, that they voted for it, or what the job did or did not entail. Because Democratic donors were very unlikely to contribute to someone challenging an incumbent in a primary, outside money allowed us to spend all our time having substantive policy conversations with voters, in living rooms, at doors, on front porches.

In the process of listening to voters, we learned that many people had been touched by the criminal justice system, many found it to be unfair. We heard literally hundreds of stories. I exchanged hugs and tears with countless victims, mothers of victims, former felons, and mothers of teens who’d been arrested or convicted.

We (and the voters themselves) discovered that the way people thought their criminal justice system should work did not match how the incumbents were running the prosecutor’s offices. We discovered that the incumbents didn’t represent our values. Outside money didn’t lead to empty tv ads with no substance, it bought us the ability to have a community-wide conversation about policy and justice and safety. Think about any issue that you care passionately about, and what a huge difference it might make to the policy outcomes around that issue if you could sit down and talk to thousands and thousands of voters and explain to them the current policy and get them to think about what they would build in an ideal world.

We aren’t the puppets of some evil puppetmaster, we are people who see unfairness and injustice in our community and wanted to help our community see what we saw, stand up and demand better. We’re incredibly grateful that there are organizations out there–that happen to be funded by Jewish philanthropists–that helped us accomplish this. I highly resent this characterization, as a Jew and as someone who has personally knocked several thousand doors, and Jonathan Fahey and anyone who supports him should be ashamed.