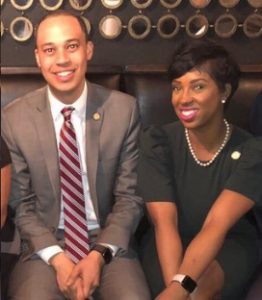 In recent years, we’ve seen an influx of new, young, diverse talent – almost exclusively on the Democratic side of the aisle, almost needless to say – into the Virginia General Assembly. Two of those impressive new members are Delegate Lashrecse Aird (D-HD63), first elected in November 2015; and Delegate Jay Jones (D-HD89), first elected in the November 2017 “blue wave.” Since their election, both have earned a lot of buzz as up-and-coming leaders. And now, the two of them have penned a bold op-ed in the Washington Post which helps illustrate why.

The op-ed is entitled, “For businesses and residents alike, Virginia must reform its energy economy,” and the key points are (bolding added by me for emphasis):

So yeah, up-and-coming Virginia leaders Jones and Aird showed real leadership here, hitting it out of the ballpark with this op-ed. Among other things, I couldn’t agree more with them that “[i]t’s time Virginia becomes first in leading the transition to this 21st-century energy economy.” In fact, I’d argue it’s long past time. And what’s been holding us up has been, in large part, the state-protected monopoly utility, Dominion Energy.

The good news is that, if Democrats take back the Virginia General Assembly on November 5 – and this is absolutely essential, because there is ZERO chance that Republicans will ever do the right thing in this area, or on a whole host of other issues for that matter – they will be poised to pass legislation doing what Delegates Aird and Jones suggest, along with a bunch of other stuff to shift this state as rapidly, effectively and equitably as possible towards a clean energy economy. Given the climate crisis, as well as the underlying economics, there’s absolutely no reason not to do this, and a million reasons TO do it. So vote Democratic up and own the ballot on November 5, and let’s get moving!

P.S. Also worth noting is that we’ve seen unprecedented pushback against Dominion Energy take hold over the past few years, in part because the economics and environmental imperatives demand it, but also because of the influx of young, diverse talent elected in 2017. I’d also point to pressure (and positive incentives) by activists, as well as from groups like Activate Virginia and Clean Virginia, for legislators to stop taking dirty Dominion dollars. The result has been dozens of candidates and elected officials, as well as the Democratic Party of Virginia, swearing off that money. And, perhaps not coincidentally, the tide appears to be turning…away from Dominion, at least as it’s behaved for many years. The battle’s far from over, of course, but at least we may be – to paraphrase Churchill – at the “end of the beginning” of it.