A little while ago, the Democratic-majority U.S. House of Representatives voted (232-196 vote, along party lines) to do its constitutional duty and proceed with impeachment against corrupt, lawless, out-of-control President Trump. Of course, Virginia Republicans voted to NOT protect and defend the constitution and the rule of law, because that’s how they roll – blind party loyalty over patriotism. As you head out to vote next Tuesday, keep in mind that basically zero Virginia Republicans have stood up to Trump in any way, with many of them actually defending the indefensible. 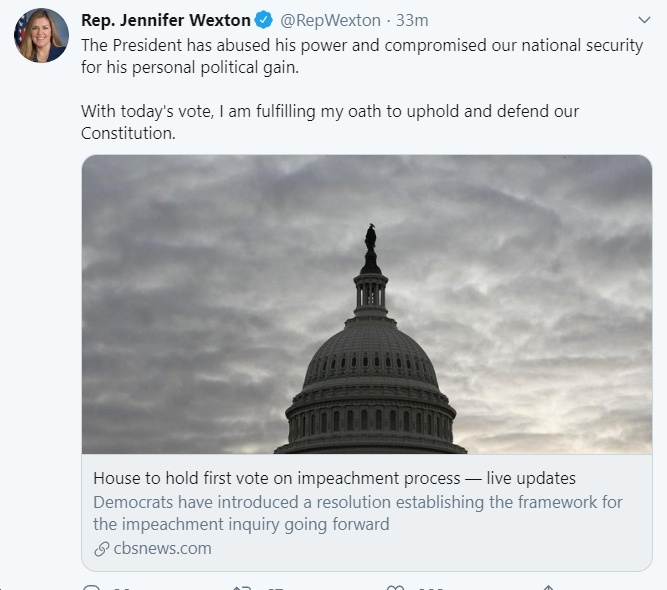 Washington, D.C. – Congressman A. Donald McEachin (VA-04) released the following statement on his support for H.Res. 660, the impeachment resolution introduced by Rules Committee Chairman James P. McGovern (MA-02). Congressman McEachin is currently recovering from a non-life-threatening surgery with an anticipated return to Congress in the next few weeks.

“This is a sad and somber day for our country,” said Congressman McEachin. “Today’s vote is a necessary step to move forward in the ongoing impeachment inquiry and I strongly support all efforts to clarify and outline the process for our constituents. Our constituents deserve to hear the many ways the president has betrayed our country and put our national security at risk for his own gain. With this vote, we are ensuring transparency, effective public hearings, and due process protections for the president or his counsel.

While I deeply regret we have come to this, I stand with my colleagues in support of today’s resolution. We must hold the president accountable for his misconduct – it is our Constitutional obligation. No one is above the law.”

“Today the House voted to let the American people hear directly from witnesses who saw President Trump engage in some of the worst abuses of power in the history of this country.

“Republicans spent weeks complaining about a process that followed rules they created, and then nonsensically voted against allowing the very public hearings they said they wanted. Absurdly, they voted against giving themselves and the President more privileges than the minority had in previous impeachments.

“Republicans have shown an Orwellian ability to ignore eye witness testimony, documentary evidence, and even the President’s own words which alone establish his willingness to endanger our national security for his personal benefit. Republicans applaud as the President obstructs justice and openly argues that he is above the law, and accountable to no one. That kind of blind partisan allegiance and denial of the rule of law is a straight road to authoritarianism.

“Like my colleagues, I did not come to Congress to impeach anyone, but every one of us swore to defend the Constitution against enemies foreign and domestic. We do not honor that oath by turning a blind eye to the President’s betrayal of our country. I applaud my colleagues for passing this resolution to provide for hearings which will establish the truth for the American people.”

Gazillionaire Glenn Youngkin slightly ahead of @TerryMcAuliffe in fundraising, as of the end of August, with the two candidates debating tonight, and with early voting starting tomorrow https://bluevirginia.us/2021/09/with-early-voting-starting-this-friday-july-1-august-31-virginia-fundraising-numbers-coming-in#comment-5536848778