For all of us – and presumably it’s a large majority of Americans who have ever had the displeasure of watching/listening to/interacting with one of Trump’s most unhinged defenders, Rep. Devin Nunes (R-CA22) – this defamation lawsuit, in which Nunes “wants to compel a former Democratic National Committee employee [Adam Parkhomenko] and a Democrat-supporting law firm to turn over their communications with anonymous writers who criticize him on Twitter.” I know, it’s “udderly” ridiculous. But wait, it gets even mooooore absurd:

Nunes in the case also is suing Republican political strategist Liz Mair and anonymous writers behind social media accounts known as Devin Nunes’ Cow and Devin Nunes’ Mom. He alleges they conspired to defame him in the 2018 election, interfering with his investigations as House Intelligence Committee chairman and causing him to win the 2016 election by a narrower margin than usual.

So…enjoy the following, including the full response from Parkhomenko’s legal team (courtesy of the Law & Crime blog), led by Virginia State Sen. Scott Surovell, which explains – among other things – that cows don’t have fingers and therefore can’t use Twitter. Haha. Also gotta love that Surovell’s Twitter following has more than doubled in less than a day, as he becomes known nationally for having helped make Devin Nunes look even more foolish than usual. I mean, seriously, does that guy have mad cow disease or something? Heh.

Devin Nunes sued @DevinCow and @mom_nunes under VA’s 1812 Anti-Dueling Act or “insulting words” law b/c you know Cows are notorious for dueling – @AdamParkhomenko‘s entire response to Nunes’ subpoena is on the Law & Crime blog https://t.co/QBEfLmCBYD #DirectorOfButtLicking

Devin Nunes has now gotten my attorney @ssurovell to over 12,000 followers. Maybe the next subpeona will work better for the Director of Buttlicking. pic.twitter.com/0SbX9Iwkto

Started the day yesterday with about 6,500 Twitter followers and finished it with about 14,000. Thank you Devin Nunes for the push – Let’s keep it going and Happy Thanksgiving! #DirectorOfButtLicking pic.twitter.com/tf8ib7GTZE

Tx @lawcrimenews – “this is a SLAPP suit brought to silence & intimidate people. . . The Twitter accounts are clear parody accounts. Nobody thought his mother was tweeting about him or that his cow had an opinion on his ethics.” https://t.co/cafTzJUMcC #DirectorofButtLicking pic.twitter.com/grBQCWzuXv

In addition to this amazing statement, @AdamParkhomenko also includes “Director of buttlicking” and “treasonous cowpoke” in his filing against Devin Nunes.

In addition to this amazing statement, @AdamParkhomenko also includes “Director of buttlicking” and “treasonous cowpoke” in his filing against Devin Nunes. 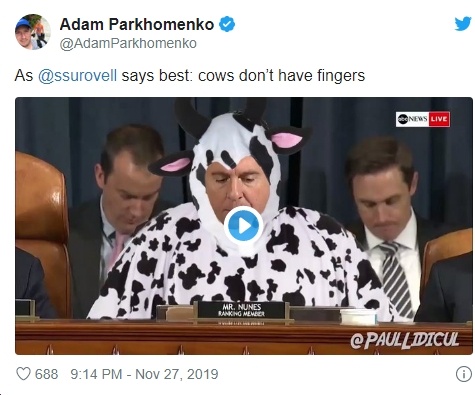