The other day, we posted on Gov. Ralph Northam, “flanked” by Dominion’s CEO (hey, it’s Virginia, what else would you expect?!?) and Republican House Speaker Kirk Cox, Gov. Northam said he does NOT support repealing Virginia’s anti-union, anti-worker, racist, so-called “Right-to-Work” laws (or, as Leslie Byrne called them during her LG run in 2005, “Right-to-Be-Poor” laws).

That story has gotten a lot of attention, both here in Virginia and nationally, with at least two Democratic 2020 presidential candidates – Elizabeth Warren and Bernie Sanders – weighing in (see screen shots, below). According to Sen. Warren, Gov. Northam has “the opportunity to empower unions and working families” and “should take it.” According to Sen. Sanders, Gov. Northam should “do the right thing” and “end ‘right-to-work’.”

Oh, and just to show how out of step people like Gov. Ralph Northam – and his close ally, State Senator Dick Saslaw, who strongly opposes repealing “Right-to-Work” laws, and whose office just blew off a constituent asking a perfectly legitimate question on this topic – are on anti-union, anti-worker, racist “Right-to-Work” laws, note that the vast majority of 2020 Dem presidential candidates, would BAN these laws. 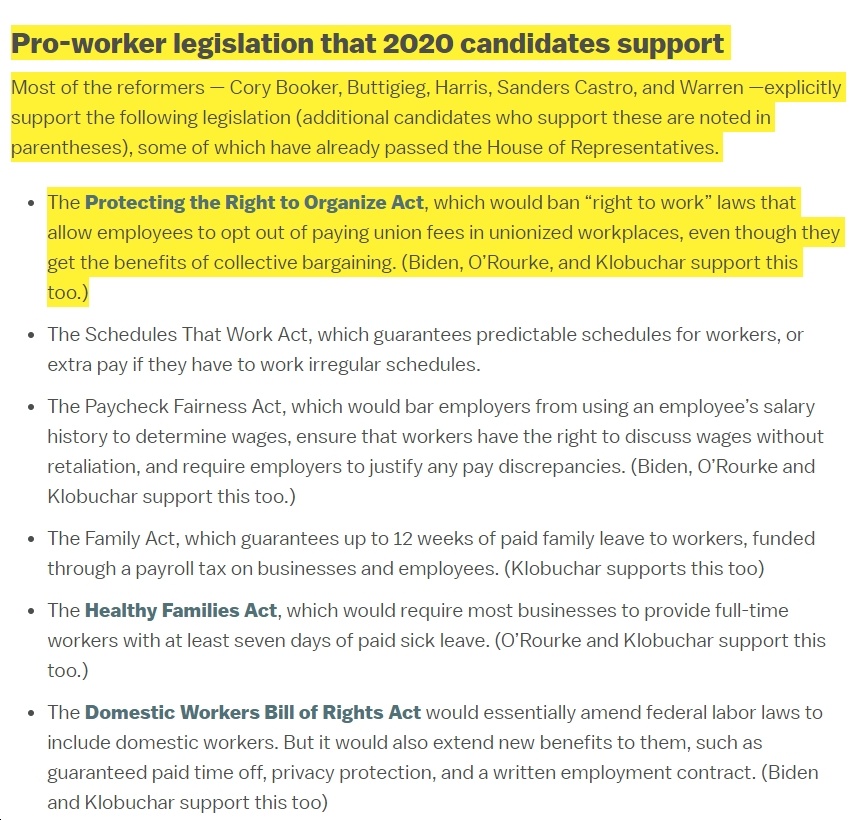 Finally, note that the roots of “Right-to-Work” laws are racist, in addition to being anti-worker. Check this out.

Although the term “right to work” may have been coined by a Dallas Morning News editorial writer, it was used, exploited and popularized by a man named Vance Muse. Nicknamed “the Big Fink” by labor unions, Muse was a larger-than-life Texan who dressed the part and did not hesitate to say or do things that made most people squirm.

“I am a Southerner and I am for white supremacy,” he told a U.S. Senate committee in 1936.

He called himself “the greatest lobbyist in America” and may never have used elevated language to disguise his work because he seemed to have little to hide – he was openly racist, anti-Semitic, and a Communist-baiter.

During the campaign to pass right to work in Arkansas in 1944, Muse and the Christian American Association – an organization he founded that was a front for wealthy special interests – distributed literature to make their case. They warned that if their effort failed, “white women and white men will be forced into organizations [labor unions] with black African apes whom they will have to call ‘brother’ or lose their jobs.”

Right to work is an affront to all working people, but especially to workers of color, who have historically formed strong unions to earn fair wages and dignity on the job. As the Economic Policy Institute points out, “Unions help raise the wages of women and black and Hispanic workers – whose wages have historically lagged behind those of white men…Black and Hispanic workers get a larger boost from unionization than their white counterparts.”

In other words, communities of color will lose the most if right-to-work laws continue to spread. In the public sector, black women will be most affected if the Supreme Court rules against workers in Janus.

Muse was openly racist, while today’s proponents of right to work prefer lofty language to sell their agenda. But the result is the same. The racist legacy of right to work is alive and well.

Any other questions regarding why so-called “Right-to-Work” laws need to be repealed, and why almost all the 2020 Democratic presidential candidates support doing so? The question is, what’s the deal with Virginia Democrats like Ralph Northam and Dick Saslaw? Is it all about continuing to receive corporate cash or is something else going on here? Because, clearly, Northam and Saslaw are not in step with where the vast majority of Democrats – including the future Democratic nominee for president, and quite possibly the next president of the United States – appear to be at this point. 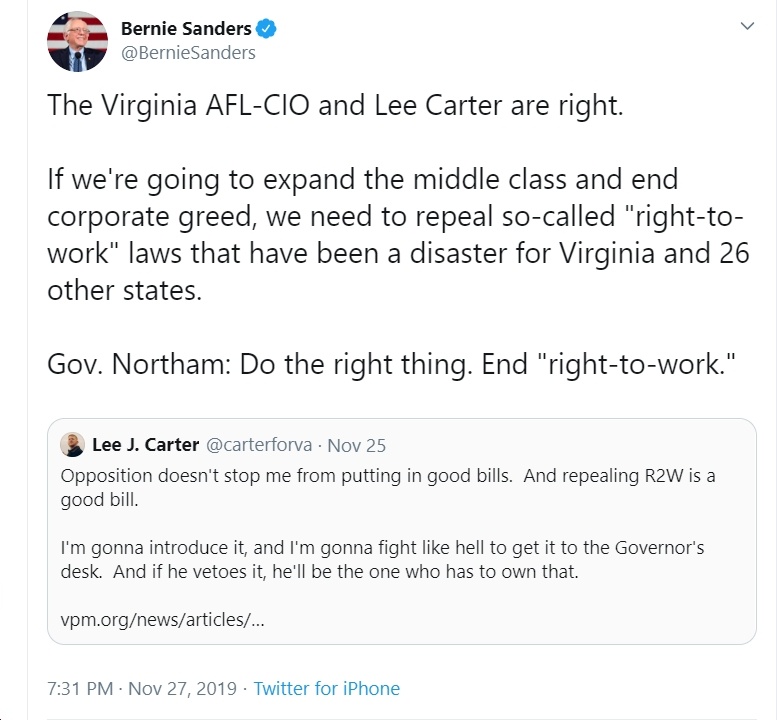 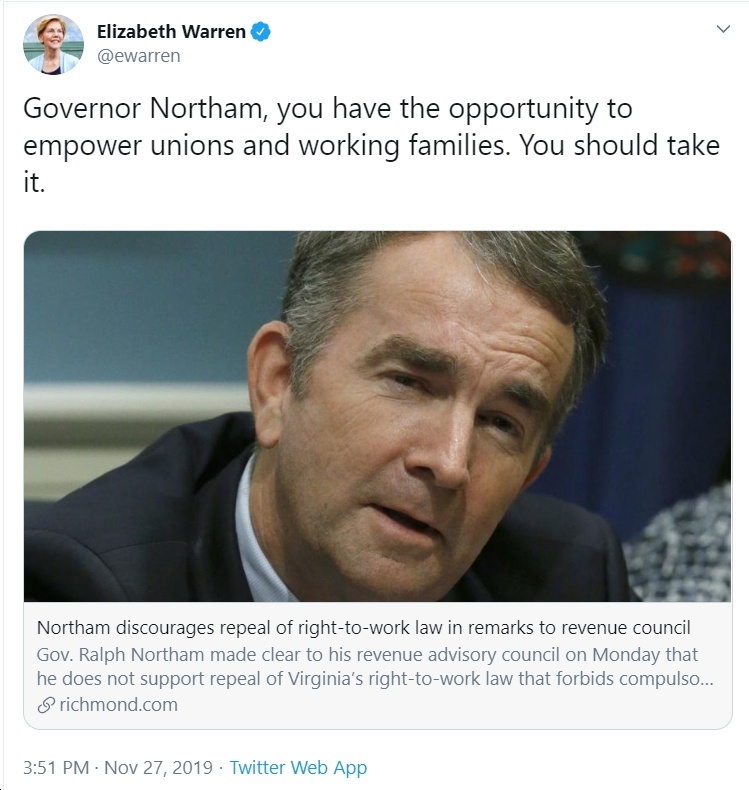