Virginia has been experiencing a series of blue wave elections since Donald Trump won in 2016, culminating in this past Tuesday’s results. Trump has been fanning the flames of dissension and discord since he took office, and Virginians have been resisting. The “deep state” that he so frequently criticizes includes thousands of Virginians who either work for the federal government or live close enough to D.C. that they are often more attuned to national politics than state debates. His attacks on new Americans are alienating to a population that is becoming increasingly diverse, especially in vote-heavy portions of the Commonwealth. And his foreign policy escapades have not been sitting well with the large number of military personnel and retirees who make the Old Dominion their home.

In addition, Virginians in population centers have become increasingly uncomfortable with the socially conservative agenda of state Republicans: their failure to tackle reasonable gun safety measures, their restrictive stands on reproductive rights, and their insensitivity to those who are simply different than them. And so we saw the first wave in 2017, when Democrats flipped 15 seats in the Virginia House and won all three statewide offices; the second came in 2018, when three Democratic women were elected to seats in the U.S. House previously held by conservative Republicans. And on November 5, 2019, the latest wave consumed Republican majorities in the Virginia House and Senate; for the first time in 26 years, Virginia Democrats control the House, Senate, and Governorship.

THE FIRST WAVE MATERIALIZES
In 2017, the Democrats ran 54 candidates against incumbent Republicans, up from only 21 in 2015. Of those, 31 were women and one-quarter were people of color. When the 2017 wave hit, it devastated the Republicans, particularly in Prince William County, where so much demographic change has been occurring. In HD 31, Latina social worker Elizabeth Guzman trounced her opponent, Republican Scott Lingamfelter, who had represented the district for 16 years. In HD 2, VMI graduate and public defender Jennifer Carroll Foy won handily in a campaign during which she gave birth to premature twins, who remained in intensive care for weeks during the fall. Single mom Hala Ayala, a cybersecurity expert who Democrats had recruited for years, emerged from her primary in HD 51 to defeat 3-term legislator Rich Anderson, a likeable Air Force veteran with substantial ties to the Prince William community. But the biggest surprise of all was former reporter Danica Roem’s victory over Bob Marshall, a 27-year incumbent and perhaps the most conservative member of the House.

The 2017 victories were widely celebrated and deservedly so. What was largely overlooked, however, was the essential role that the top of the ticket played in our success in the House. Northam’s margin (+9) was larger than any major Democratic statewide race since Kaine’s 5-point margin in 2005, and larger than either McAuliffe in 2013 (+3) or even Obama in 2008 (+6). There is no doubt that the new Governor’s large victory made the difference in many of the races; in fact, in only 3 of our 15 pickups—Kathy Tran in Fairfax County, Chris Hurst in Blacksburg, and Jennifer Carroll Foy—did the Delegate candidates’ winning percentage exceed Ralph Northam’s in that district.

2018 AND THE POWER OF 49
While 2017 did not bring Democrats the majority, it decimated Republican leadership, already affected by retirements. The Republican Whip—Jackson Miller—lost to Lee Carter in Prince William County, and their caucus chair—Tim Hugo—narrowly escaped defeat (only to lose in 2019). Democrats defeated four members of the House Appropriations committee (another retired), including two budget conferees. The Chair of the House Transportation Committee lost. The Chair of House Courts retired. Democrats entered the 2018 General Assembly Session with a caucus much more like Virginia—47 percent women, 43 percent people of color, and one-third under the age of 40—than the other side of the aisle. At 8:08 p.m. on May 30, 2018, we passed a budget that included Medicaid expansion, and the Commonwealth truly felt the impact of the blue wave and the power of 49.

The 2017 election was the perfect storm for Democrats—the demographic shift in the state coupled with the Trump resistance was a potent combination that rocked the political universe. But for Democrats to gain the majority, we would need some help from the courts—in the form of revised districts where challengers might prevail in 2019.

REDISTRICTING MAKES A DIFFERENCE
On June 26, 2018, we got what we wanted. In a case that was ongoing since 2014, the federal court held that the 2011 redistricting was an unconstitutional racial gerrymandering, and ordered that new maps be drawn. The last chance for the Republicans was the U.S. Supreme 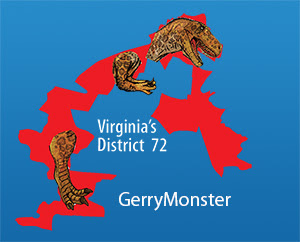 Court, which first denied a stay of the U.S. District Court’s order, and then rejected the appeal altogether. After a series of legislative skirmishes, the court intervened and drew its own map that increased the competitiveness of a number of districts. Finally, after years of struggling to win in districts drawn (using unconstitutional racial “packing”) to favor Republicans, Democrats had a real opportunity to win the majority. One of my main goals—the creation of fair districts—had been accomplished. The conditions had been put into place for Democrats to take the majority; we now had to deliver.

The key to this was increasing voter turnout. In 2017, turnout had hit about 47.6 percent of registered voters. In contrast, the 2015 off-off year turnout in Virginia was 29.1 percent. If we increased our turnout numbers over 2015, we would likely gain the majority.  On November 5, 2019, we got our answer: when the dust settled, turnout statewide appeared to be around 40 percent, with even higher turnout in the districts we had targeted, and the decade-old goal for House Democrats had been attained—the majority. For the first time in 26 years, Virginia Democrats control the House, Senate, and Governorship.

PENT-UP DEMAND AND THE TRIFECTA—WHAT NEXT?
Virginia is now one of 15 states where the Governorship and both legislative chambers are controlled by Democrats, and there is likely to be considerable pressure to pass everything our constituents have wanted, all at once. My hope is that our new majority will not move faster than public sentiment would dictate, and focus on issues that have broad bipartisan support. Here are some things to watch and questions to be resolved:

1. ERA. Democrats are likely to move quickly on this resolution, and I would be surprised if it did not pass in the first several days of the 2020 session.

2. Gun safety. Universal background checks and a red-flag protective order law are two popular measures which should advance within the first week. There will be other measures, but these will likely be the first two.

3. Minimum wage. Virginia will likely join 29 other states and pass an increase, but the specifics are not yet clear. Does the state attempt to move to $15 per hour, and if so, how quickly? Should any increase include a cost of living adjustment? A phase-in of the increase would make the most sense, including some flexibility to adjust the schedule based on economic conditions. The legislature may consider imposing different wage rates in different regions, based on costs of living.

4. Increased investments in education. The Virginia Board of Education has suggested some major changes to the Standards of Quality that would dramatically increase the state’s spending for K-12. This has the possibility of consuming most of any new revenue coming into state coffers, but these investments are key to the future of the Commonwealth, and Democrats should deliver on their promises in this area.

5. LGBTQ protections. Expect early passage of a bill to prevent discrimination against the LGBTQ community in employment and housing.

6. Health care. What initiatives will be taken in the health care arena? There will be a push to establish a state health care exchange and proposals for “reinsurance” to bring down the cost of coverage. Action is clearly necessary on coverage issues and costs, but these issues are so complex and expensive that careful progress is merited. Expect some movement to remove medically-unnecessary barriers to women who seek to exercise their constitutional right to an abortion.

7. Redistricting Reform. Will there be enough support to pass the redistricting reform proposal advanced last year so it can be placed on the ballot this fall? The proposal that passed last year would create a process that is better than what is presently used in Virginia, but it has its flaws. Reform advocates might just say that it doesn’t go far enough and prevent it from passing a second time.

8. Campaign Finance. Virginia continues to be one of the few states where there are no limits to campaign contribution amounts. Expect legislation to restrict contributions from publicly-regulated utilities, but will Democrats also impose limits on individual contributions? Several prominent individuals provided major funding to Democratic candidates this fall; will giving such large amounts be prohibited in the future?

9. Voter Registration. Expect initiatives to make it easier to register and vote. There are major cost implications to automatic registration when obtaining a license at DMV or utilizing a state service such as Medicaid, but Democrats will likely make it easier to vote absentee and early.

10. Climate Change. Will a Green New Deal come to Virginia? Last year’s proposal, while a wonderful aspirational statement, was deeply flawed, and indicated insufficient understanding of how markets work and the role of utilities in ensuring the lights stay on and prices remain reasonable. Expect the state to join the Regional Greenhouse Gas Initiative (RGGI). There is a “sweet spot” for reforms in energy policy, if Democrats invest the time necessary to find it.

Democrats now control government in Richmond. The changes they will enact will have a large impact on the lives of Virginians over the next decade. It is now time to deliver.

MY TERM COMING TO AN END
On December 31, 2019, my service as your delegate will end. It has been a privilege to serve and the honor of a lifetime. I will remain active in public affairs, and look forward to what Virginia and other states will do to improve our country and our future.

Portions of this update are excerpted and adapted from the forthcoming book “Great States Don’t Just Happen: The Role of Politics, Policy and Personalities in Shaping Virginia and the Nation.”