And with this edition, we’ve reached the final “Flip-A-District Friday” for 2019. Thanks to Del. Rip Sullivan and his “Project Blue Dominion” for doing these!

Welcome to this year’s final issue of our “Flip-a-District” series, the “Marquee Match-up Edition.” We focus this week on the two races that have consistently been the focus of the most attention this cycle: Clint Jenkins versus Chris Jones in the 76th District, and Sheila Bynum-Coleman versus Kirk Cox in the 66th District.

When Clint and Sheila win next week, it will mark a pair of historic and highly symbolic losses for the GOP, since their candidates are two of the highest-ranking and most well-funded Republicans in Virginia.

Both races are shaping up to be among the most expensive of the 2019 cycle, and it will take every one of our Democratic voters coming out to the polls to win these districts given how much cash the incumbents have in the bank and the Republicans’ persistent attempts to mislead voters about Jones’ and Cox’s records in the House.

We have only four days left before control of the General Assembly is decided. Let’s make sure we do all we possibly can to ensure a brighter, better future for all Virginians. 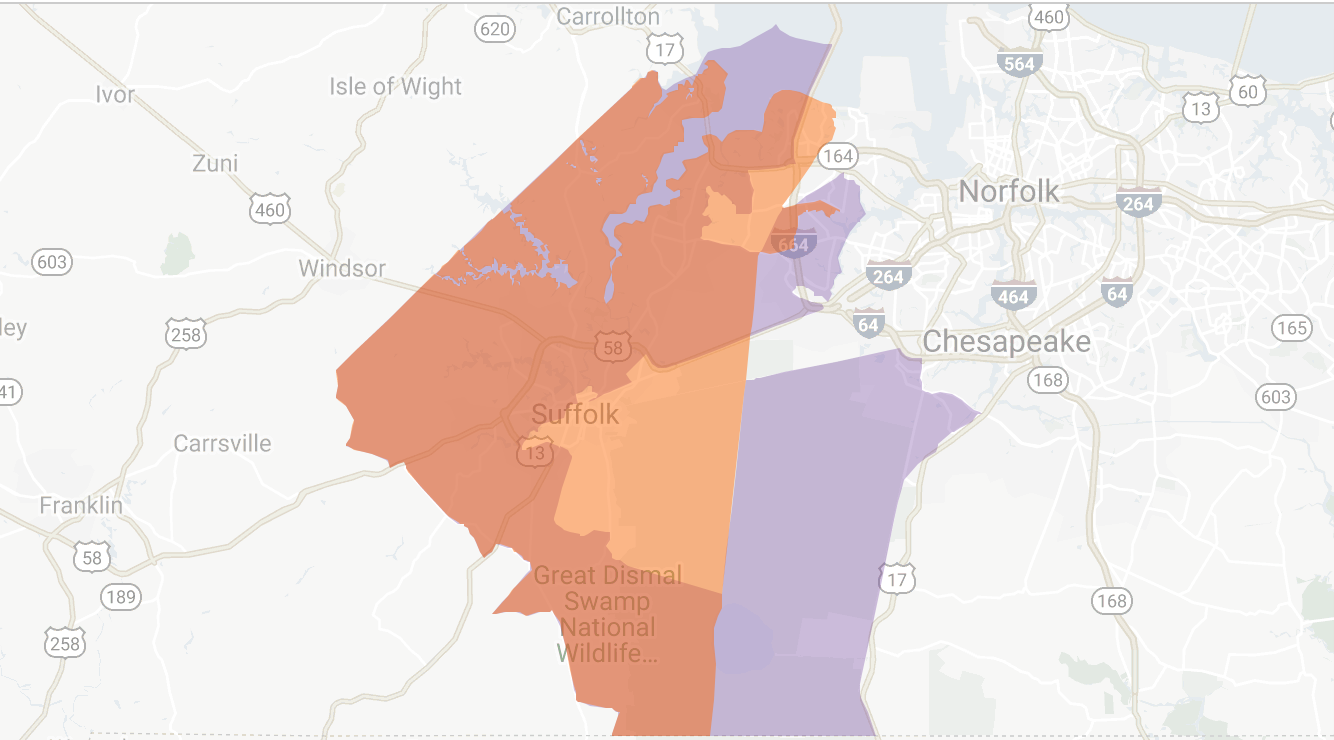 The 76th District was significantly redrawn by the courts this year because it had been racially gerrymandered by the Republicans. In the graphic above, the purple shading represents the old district drawn in 2011, while the orange shows the new district boundaries. The court’s redistricting shifted the partisan makeup of the district by 27.4 points in the Democratic direction.

Chris Jones has not faced a Democratic challenger since 2001. Jones has been a staunch loyalist to the Republican Party throughout his tenure, voting with the GOP Caucus 97 percent of the time in 2019. He boasts a perfect score from the extreme pro-gun group Virginia Citizens Defense League, a 93 percent score from the NRA, and has been endorsed by the far-right Virginia Society for Human Life.

This is Democrat Clint Jenkins’ first run for state office. He is a perfect fit for the district, having been born and raised in the 76th. Clint is an Army veteran and very involved in his community. You can read his full bio here.

The Trump-effect has unfortunately seeped into Virginia Republican politics — when a candidate has held a position for years and is called out on it for being unpopular or incorrect, the response is to flat-out deny it. Chris Jones has taken a page from Trump’s playbook, particularly on Medicaid expansion. For years he used his powerful position as the Appropriations Committee Chairman to block Medicaid expansion, with the Washington Post referring to him as “a leader in the fight against Medicaid expansion.”

One Virginia-Pilot article reported that:

Jones and House Majority Leader Kirk Cox of Colonial Heights said Republicans will be disappointed if Medicaid expansion is included in McAuliffe’s proposal. ‘We’ve been clear all along – that’s coming out,’ Cox said.

In a truly Trumpian turn, Jones is now trying to take credit for Medicaid expansion, claiming that he “led the fight to expand Medicaid” in a television ad which can be easily discredited by looking at his obstructionist record.

Jones is trying desperately to distance himself from his Republican record, and even from the fact that he is, indeed, a Republican. For example, if you type “Chris Jones” into Google, the first result (an ad) calls him an “independent.” Surprising — although maybe not really — from a powerful Republican in House leadership who has voted with his party over 90 percent of the time on the floor.

This strategy of distancing himself from the Virginia Republican Party was predicted by columnist Jeff Shapiro of the Richmond Times-Dispatch back in January 2019 in an article titled “Looking for a win, Republicans try something different: looking like Democrats.” This week the New York Times shined its light on the same thing, in a similar article titled “In Virginia Suburbs, Republicans Sound a Lot Like Democrats,” which echoed much of Shapiro’s predictions. The piece, focused mainly on Delegate Glenn Davis (R), noted that:

[Davis] is among a coterie of Republicans who are campaigning on issues long identified with Democrats ahead of Tuesday’s elections for the Virginia legislature, shifting away from a Republican base that in the age of Trump can no longer win suburban elections on its own.

Clearly Jones is taking a page out of this deceptive playbook and attempting to distance himself from the increasingly unpopular brand of Trump Republicanism.

Even Jones’ website refers to him as an “independent,” but we know better. He is a long-time establishment Republican. The voters of the 76th won’t be fooled.

During the most recent reporting period, Clint out-raised Jones $398,423 to      $259,094. But Jones still has more money on hand than Clint. Democrats need to show up next Tuesday. If they do, Clint will win. 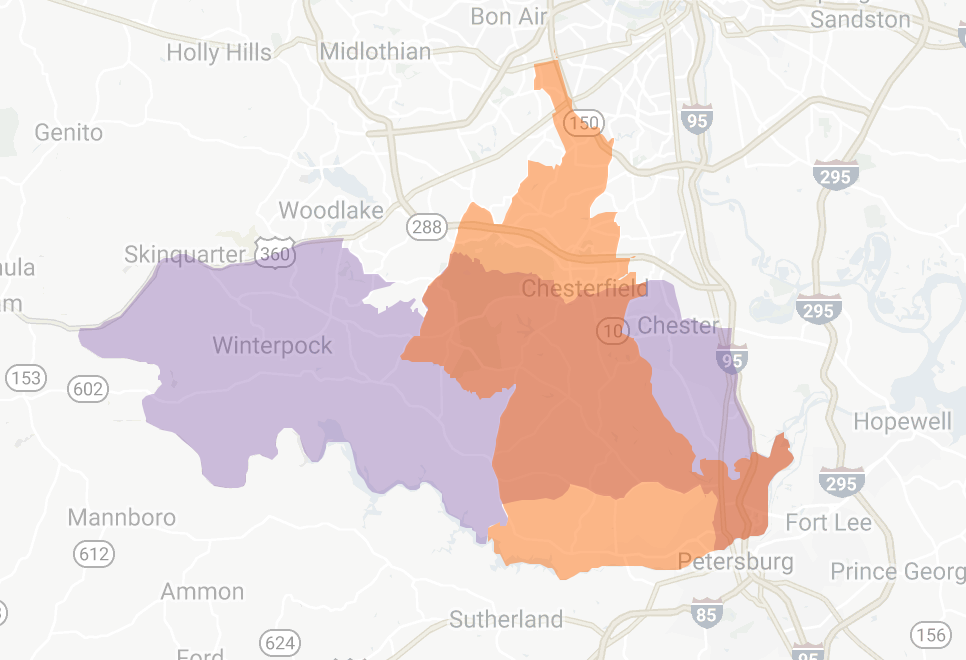 Like the 66th, the 76th District was redrawn by the federal courts this year due to racial gerrymandering. In the graphic above, the purple shading represents the old district drawn in 2011, while the orange shows the new district boundaries. The court’s redistricting shifted the partisan makeup of the district by 32 points in the Democratic direction. Because this year is an “off off” election, the raw Democratic advantages in both districts does not guarantee wins — we must get all of our voters to the polls to win in these expensive races.

Since winning in a tight race in 1989, Kirk Cox has faced a Democratic opponent just three times between 1991 and 2017. Now that he has a truly competitive race on his hands, his lack of preparation shows. Cox is the leader of the Republican Party in Virginia, and not surprisingly votes with his party 95 percent of the time. Because of Cox, absolutely no gun safety bills have passed during his tenure as Speaker, not even after the tragedy in Virginia Beach earlier this year that prompted the Governor to call a Special Session on Gun Violence. It was Cox who had the NRA set up shop in his conference room during the Special Session, and it was Cox who shut down the session after 90 minutes. Cox also led the fight to block the ERA and several Senate-passed, bipartisan anti-LGBTQ discrimination bills.

Sheila, on the other hand, has personally faced gun violence: her daughter was shot — and thankfully survived — at a party in 2016. She is committed to making a difference to ensure that gun-related tragedies do not strike another family in Virginia. A small business owner, community activist, and mother of five, Sheila is a great fit for the 66th District and will be a much better representative for her community than Cox.

Like Jones, Cox is desperately trying to mask his record on a number of key issues. Consider the following excerpts from a Virginia Mercury article covering a recent debate between Cox and Sheila:

– “Cox said he sees gun violence as ‘very serious problem,’ but he did not endorse any additional gun restrictions.”

– Note: the General Assembly was called to a Special Session to address this issue and Speaker Cox blocked all proposed solutions to this “very serious problem” and shut the session down in 90 minutes.

– “Cox said [LGBTQ] ‘discrimination should be against the law,’ even though several bills aimed at preventing anti-LGBTQ discrimination didn’t receive hearings this year in the GOP-controlled House.”

– “When the candidates were asked whether they believe ‘climate change is happening’ and what the state could do about it, Cox didn’t give a yes or no answer, saying it’s an issue that ‘obviously is debated a lot.'”

In addition to giving non-answers in debates, Cox is running misleading attack ads against Sheila, including one recently rated “Mostly False” by Politifact. His positive ads are completely devoid of policy and substance, instead repeating the pablum that he is “one of us.”

Like Jones, Cox’s leadership position in the House of Delegates has enabled him to amass a war chest of cash from high dollar donors. But Sheila has been working extremely hard to close the gap, out-raising Cox during the most recent campaign finance reporting period $373,027 to $342,418. Cox is burning through his cash-on-hand quickly due to frequent media buys. Sheila is up on TV, too, and is focused like a laser on getting Democrats to the polls. When we vote, we win. And we will win here in the 66th.

For Democrats to take back the House of Delegates and the Senate next Tuesday, there are numerous combinations that can propel us to the majority. It would be particularly historic and deeply rewarding, though, if Democrats could get there by unseating two of the most well-funded, conservative members of the House.

Just because the 76th and 66th Districts now lean Democratic does not guarantee a win in either, especially given that this is an “off off” election year. We must use the few remaining days left before Election Day to contribute our money and time to Clint and Sheila so they can fight back against the GOP’s negative attacks, raise their name ID, and effectively execute their GOTV strategies.

If you can, please take time this weekend to phone bank into these two districts to remind voters to go to the polls, or volunteer to knock doors. Every single vote counts.

That’s it for Volume XIX, the final issue of this year’s Flip-a-District series.

With Election Day nearly upon us, I feel confident about the result. We will take back the General Assembly and make progress on the issues that Virginians care about most. A win for Democrats is a win for women’s empowerment, health care, reproductive rights, the environment, gun safety, education and many other topics of importance to Virginians.

As Caucus Campaign Chair I am enormously proud of all of the Democrats who have stepped up to run this year. We have a remarkable, historic number of talented, diverse Democrats running in every corner of the Commonwealth (see prior editions of Flip here). Each candidate would be a great fit for their respective district. I look forward to calling them my colleagues soon.

I am also grateful to the countless volunteers and donors who have worked to put us in a position to take back the majorities in the House and Senate. Your time, energy, and financial support have made the difference, and it is thanks to your focus and determination that we will come out on top on November 5th. The 2020 election looms, but it is THIS ELECTION NEXT WEEK that will change the course of Virginia’s history, send a message to the rest of the country, and light the fuse — as we did in 2017 — for what’s to come next year.

We have five days left to make calls, knock on doors, and get out the vote.