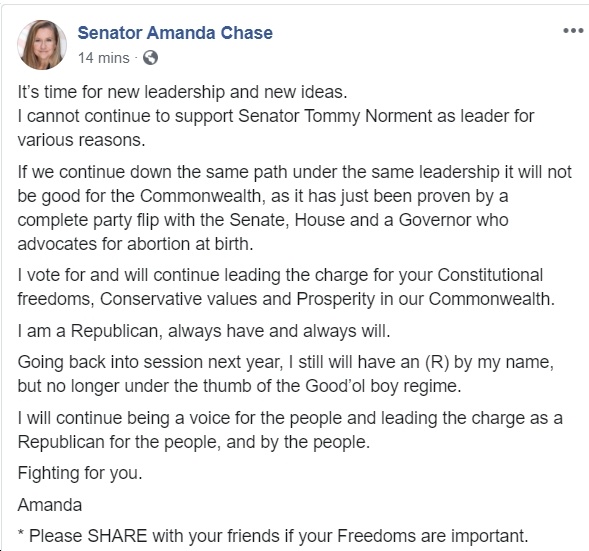 Hahahahaha. I mean, on one level, I can’t blame anyone for leaving the Virginia Senate Republican Caucus, given its horrendously bad leadership (e.g., corrupt racist Tommy Norment extremists like Mark “Criminalize Miscarriages” Obenshain…). And I actually agree with right-wingnut Sen. Amanda Chase (R-SD11) – see her Facebook post and video, below – that Senate GOP “caucus leadership is broken and ineffective.” But I wonder what’s *really* behind Chase’s threat to leave the Republican caucus “if the current leadership does not change.” Clearly, something set her off. Stay tuned…

P.S. I mean, the Republican leadership in the Senate has been awful for a long time. So what changed, other than losing their majority? If anything, one could argue that Senate Republicans *over*performed by 1-3 seats oh 11/5 over what most analysts expected.

P.P.S. It’s not like Chase, the ultimate right wingnut/true believer, is going to vote with Dems, so…???

Our Commonwealth has come to a crossroads. The GOP Senate leadership has failed to lead and new leadership is required.

I have presented my concerns to the leadership and they have been dismissed.

If that means me breaking away from the caucus so be it.

I am a voice for liberty and the pursuit of happiness; and a fighter for your Constitutional freedoms.

At this time I feel the caucus leadership is broken and ineffective.

I stand for and with the people, not a caucus.