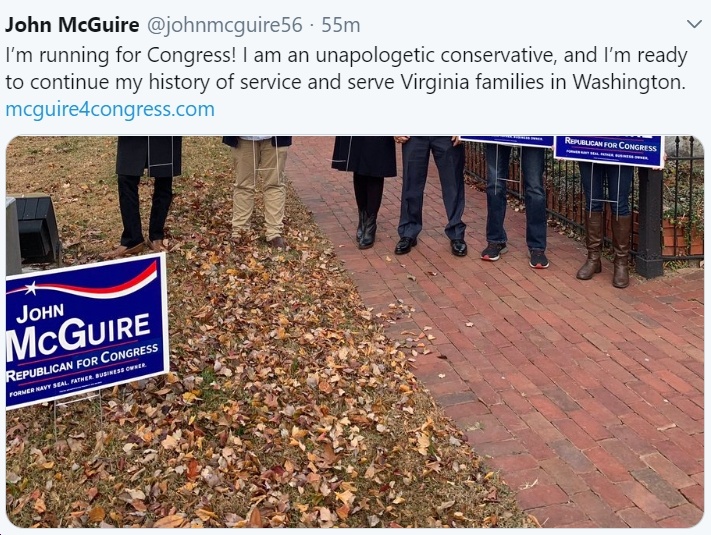 The following press release is from the Democratic Party of Virginia. Gotta love how “Delegate-ish John McGuire”: a) has only served 23 months in the Virginia House of Delegates, as a “springboard to a campaign for higher office”; and b) how he brags about being an “unapologetic conservative,” despite being in a party that has a *ton* to apologize for. Anyway, let’s all just make sure that Rep. Abigail Spanberger (D-VA07) handily defeats whichever “unapologetic conservative” the Republicans end up nominating.

McGuire, who ran for the House of Delegates this year admitting he didn’t care much about actually serving a full term, is eager to depart his current job just days after winning his first re-election. McGuire’s claims to fame during his pre-Congressional campaign time as a Delegate have been renting a house in order to run in the 56th district (earning him the nickname “No Show” John McGuire), flip flopping and opposing the Equal Rights Amendment when he realized it would hurt him in a Republican primary for higher office, voting against Medicaid Expansion even when other Republicans like Kirk Cox voted for it, and taking part in a secret, closed-door NRA strategy session in advance of the July 9th Special Session where Republicans cut and run after 90 minutes without debate.

“John McGuire doesn’t care about representing his constituents because his mind has been on running for Congress ever since Dave Brat lost his seat,” said DPVA Press Secretary Grant Fox. “No Show John McGuire has used his time as a ‘Delegate’ to cozy up to the NRA, oppose equality for women, and vote against Medicaid Expansion even when many of his Republican colleagues supported it. Residents of the 7th Congressional District got rid of their no-show Congressman last year. Why would they elect another one who won’t even bother to show up for his current constituents?”

From a Blue Virginia follower…looks like McGuire didn’t exactly draw big crowds to his kickoff residents in VA-7. “10 counties, 100 supporters (if you don’t count John & Tracy McGuire and their four traveling staff/volunteers). At three counties they had to fake the photo because no one else showed up. According to the United States Census Bureau’s 2017 data for Virginia’s 7th Congressional District, the total population of the district is 790,084. ”