On Dec. 18, Del. Ibraheem Samirah (D-Fairfax/Loudoun) introduced a bill, HB152 (see below), which would require “all localities to allow development or redevelopment of ‘middle housing’ residential units upon each lot zoned for single-family residential use.” 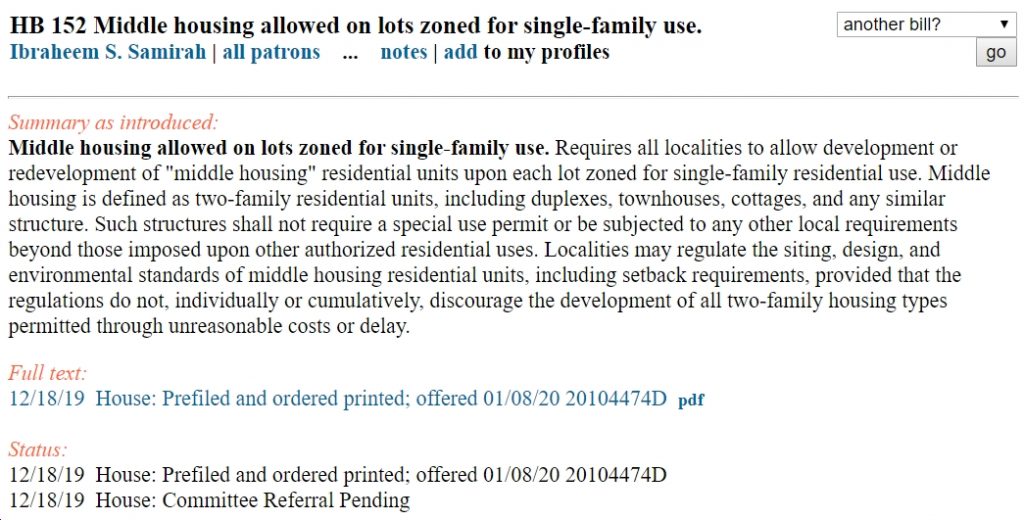 Here’s how Alex Baca at Greater Greater Washington described the bill: 1) “Del. Samirah’s bill represents a decently fair way to reform single-family zoning because it’s a statewide effort”; 2) “single-family zoning is not environmentally sound”; 3) “only allowing single-family homes makes it harder than necessary to build affordable housing”; 4) “More than that, its history is ugly. Single-family zoning in America originated to segregate types of buildings as a proxy for segregating people, mostly by race and income. We do not need words in our laws today that continue to enable patterns that echo that history.” 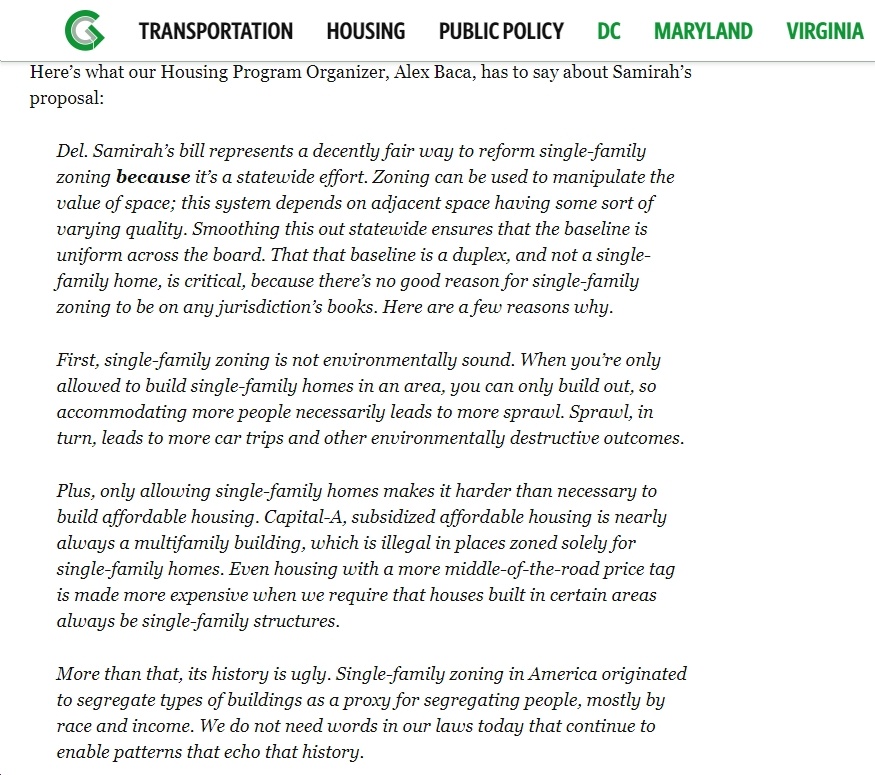 For an example of how exclusionary single-family zoning works, check out Map: Arlington’s Multi-Family Housing Mostly Concentrated in South, Making North Arlington “Completely Inaccessible to Many” Also, for some historical background on how we got where we are, see “The Color of Law” Definitively Proves that Government PROMOTED Segregation in America for Generations. And check out Cities Start to Question an American Ideal: A House With a Yard on Every Lot (“Townhomes, duplexes and apartments are effectively banned in many neighborhoods. Now some communities regret it.”).

Sounds fairly reasonable, right? You’d think that liberals concerned with racial equity and affordable housing would be supportive of this, as would conservatives who believe in the government allowing the “free market” to work, in this case so that people can have the freedom to buy the type of housing they want, where they want, and not be “excluded” by non-market forces (e.g., government policy). But…apparently not. Instead, check out the types of responses Del. Samirah has been getting…overwhelmingly from the right wing: 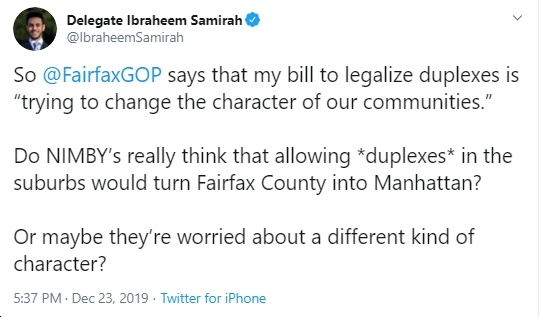 “Trying to change the character of our communities,” huh? Can’t IMAGINE what the Fairfax GOP could possibly be referring to there, eh? Hint: think very loud, audible “dog whistle.”

Next, the responses to Del. Samirah’s bill by these right wingers – he’s a “Palestinan…who hates the concept of America,” he’s a “radical globalist who wants to destroy America,” he’s “trying to turn America into the craphole [he] came from,” he supposedly “hate[s] White Americans so much” – show that these folks are not motivated by free-market economics or economic “angst” or anything like that. To the contrary, it’s clear what their motivations are…and they aren’t pretty. 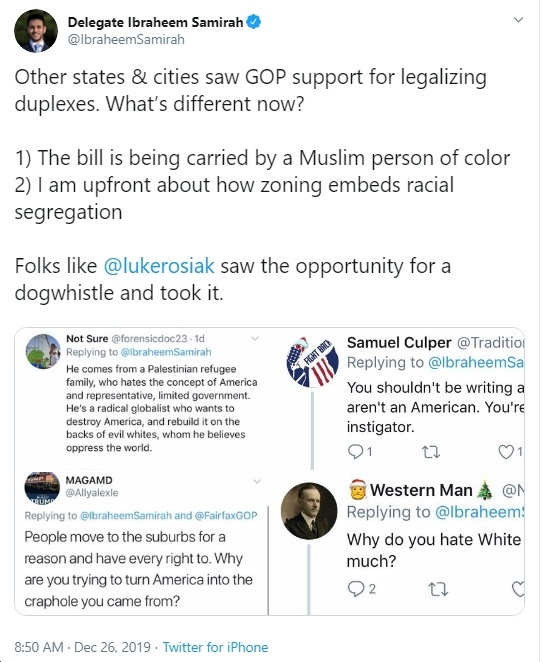 Good to see Jamelle Bouie of the NY Times pushing back, tweeting that “it is always nice to see people take off the mask.” 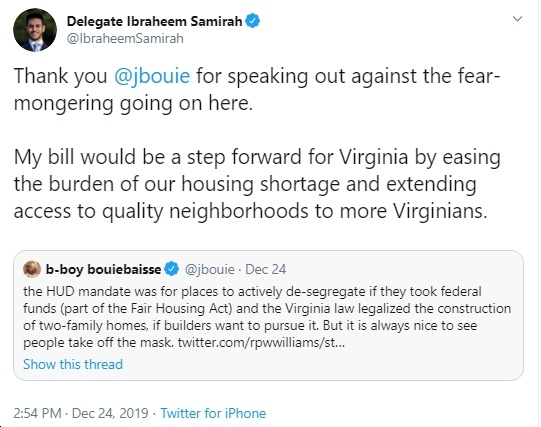 Sadly, it’s not just right wingers who are resistant to opening up housing markets to different, denser types of housing. See this article, for instance, about how deep-blue Arlington County – “expensive” and “dominated by single-family homes” – is already bracing for “blowback” simply from a “a forthcoming study of so-called “missing middle” housing, which refers to homes that fall between apartment-sized and single family-sized.” Because, the sad reality is, “opening land to denser construction [aka, ‘upzoning’]…has long been a third rail in suburban communities.” Also, check out this Mother Jones story, which cites Arlington County as a “case study in what’s wrong with housing in America”

“Located right next to Washington, DC, the county has a huge demand for housing that has pushed the average home price to around $600,000, which will only increase once Amazon opens its 25,000-worker second headquarters there. And yet nearly 90 percent of the residential land in Arlington is zoned for single-family detached houses, meaning that even if people want smaller, denser, more affordable homes, developers aren’t allowed to build them.”

Let’s conclude this discussion with some facts and positivity, as opposed to fear mongering and hysteria, by people who know what they’re talking about. For instance, Jenny Schuetz is an urban economist, studying housing and land use. As she explains, repealing bans on duplexes would allow for “more efficient use of land,” “development of lower cost [housing] w/out subsidies,” and “lower[ing] barriers to economic/racial segregation.” As she points out, there are “all important goals.” 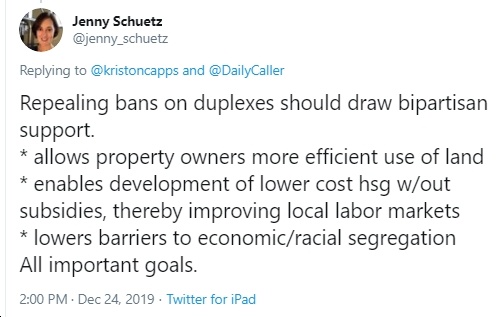 Then there’s Kriston Capps, a staff writer at City Lab on housing and architecture, who rebuts a completely “misleading” “rewrite” of his story on Samirah’s legislation by explaining that all this bill would do is “repeal a ban on duplexes,” and making the factual point that “zoning is an exclusionary tool that contributes to segregation.” 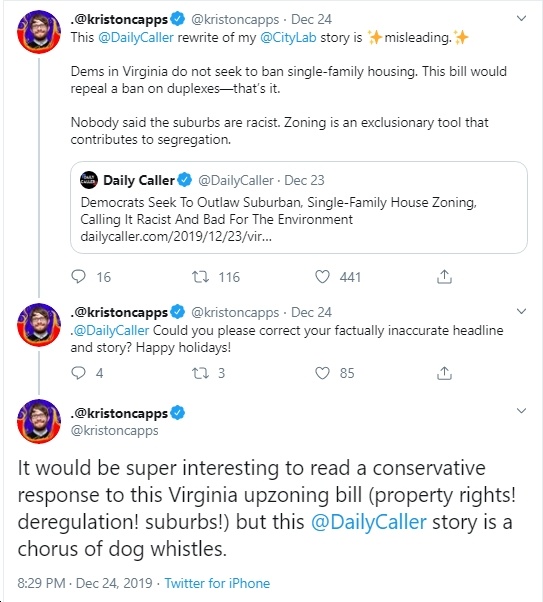 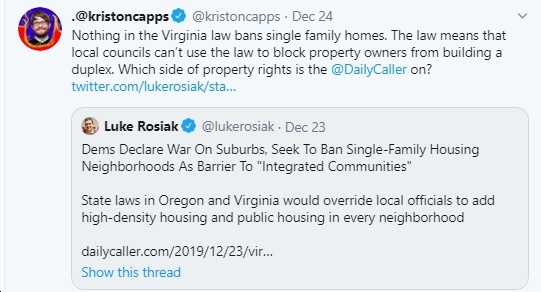 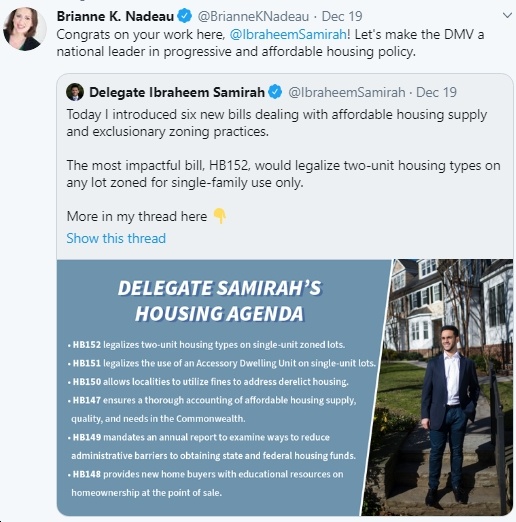 Then there’s Sierra Club legal fellow Ankit Jain, who urges that we “bring the YIMBY movement to Virginia.” 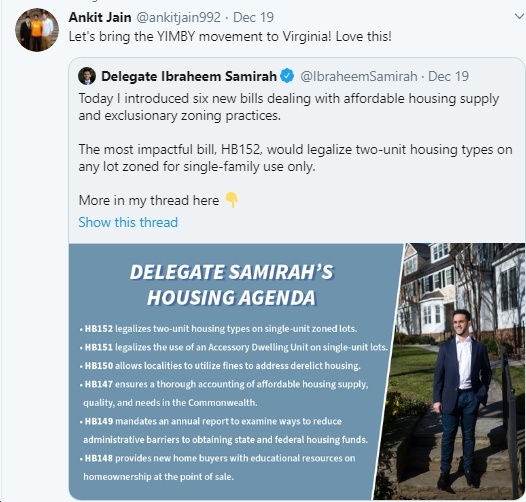 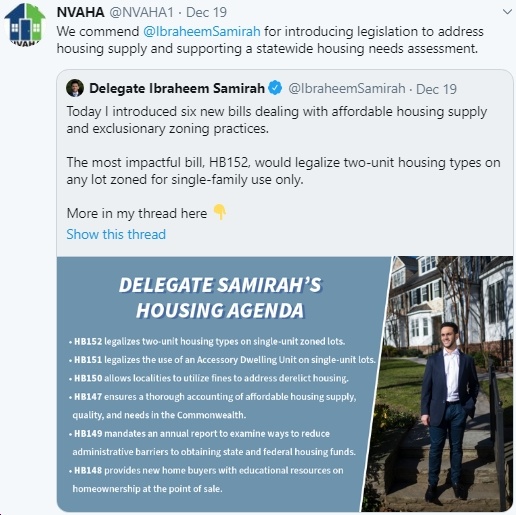 Jamelle Bouie again, this time riffing on Trump’s slogan, in this case “make duplexes (and triplexes and fourplexes) great again!” 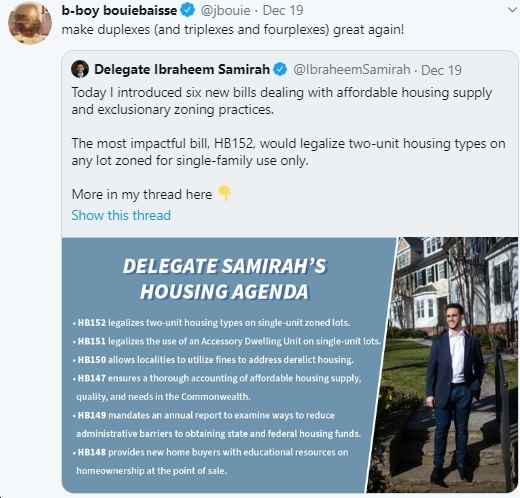 And finally Alex Hendel, who studies urban policy and economics at UVA, thanks Del. Samirah for “introducing legislation that increases housing affordability, improves access to opportunity, and strengthens our statewide response to climate change.” All great reasons for ditching exclusionary zoning practices,” no? 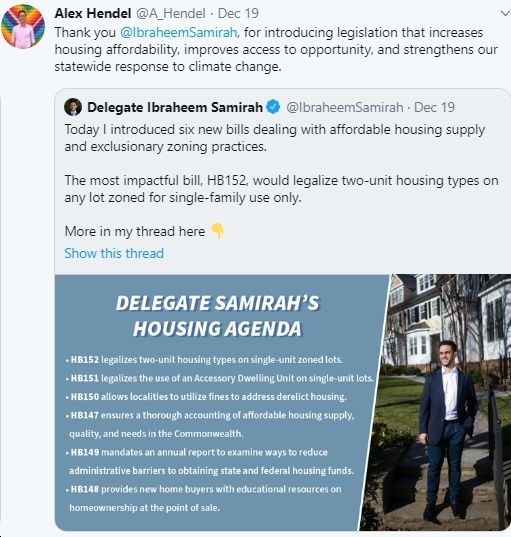