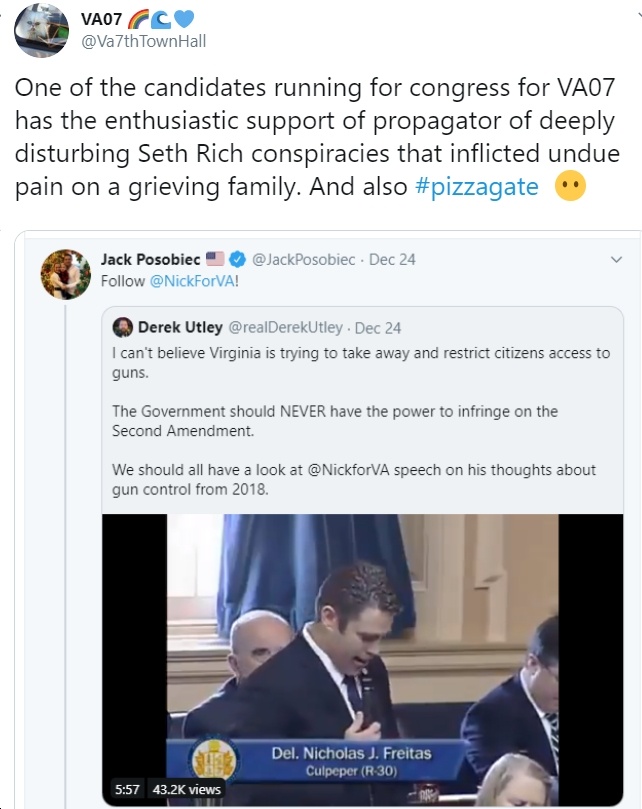 For the record, Jack Posobiec – who supports Nick Freitas (far-right Republican) for U.S. House of Representatives in VA07, is an:

American alt-right[2][3][4] internet troll[5][6][7] and conspiracy theorist[8] best known for his pro-Donald Trump comments on Twitter. He has promoted fake news, including the debunked Pizzagate conspiracy theory that high-ranking Democratic Party officials were involved in a child sex ring.

Among other things, Posobiec has “frequently tweeted about the white genocide conspiracy theory”; “following a “Unite the Right” rally in Charlottesville, Virginia, that led to violent clashes between white nationalists and anti-protesters, Posobiec said that the rally had become ‘massive propaganda’ for the left and that the mainstream media was ‘fanning the flames of this violence'”; “repeatedly published posts containing the white supremacist code ‘1488’, or the Fourteen Words, and is a supporter of the slogan”; etc.

So, the question is, does Nick Freitas, the “Charlie Kirk of Virginia,” welcome Posobiec’s support or reject it – or what? Of course, given that Freitas’ own far-right views and the type of rhetoric Freitas uses – rants about “various cultural changes that happened in the 60s,” “the welfare state,” “dismantling families as [they] became more and more dependent on the government,” etc., then flippantly dismissing concerns of his African-American colleagues – “welcome Posobiec’s support” is highly likely.