See below for videos of Virginia’s Congressional Democrats as they speak in support of impeaching Donald Trump. I’ll add more speeches once they take place. And no, I’m not inclined to include Virginia Republicans’ ridiculous, dishonest blather, in which they refuse to stand up to a lawless, corrupt president, and uphold their oaths of office, simply because the lawless, corrupt president happens to be from their own “team.” Disgraceful.

Each of us took an oath to protect and defend the Constitution of the United States. Not to the President. Not to our political party.

Today, history will judge. Did we abide that oath?

The need to protect against just such abuses prompted our founders to grant the sole power of impeachment to this House.

The delicate balance of power that underpins our democracy is threatened when a President disregards the Constitution by obstructing Congress to cover up illegal behavior. In doing that, President Trump violated his oath.

“Today, I will vote to impeach President Donald Trump for abuse of power and obstruction of Congress.

I don’t hate the President, but I love my country, and I have no other choice.

Voting for these articles of impeachment is the only moral course of action, the only way to honor our oath of office.

I have no doubt that the votes I cast today will stand the test of time.

This has nothing to do with the 2016 elections.

I am so disappointed that my Republican friends approve the President’s abuses of power and solicitation of foreign interference in our elections. This is the very definition of the willful suspension of disbelief.

They know in their hearts that what the President has done is deeply wrong.

They know that they would vote without hesitation to impeach a Democratic president who had done these things.

I remind all Americans that the President did not rebut the facts – the many, many facts – which led to these articles of impeachment today.

Every Member of Congress swore an oath to uphold and defend the Constitution. See why I plan to vote for both articles of impeachment against President Donald Trump. #DefendOurDemocracy pic.twitter.com/2TTn23Jp7A

Today is a somber day in our nation’s history. I am saddened that the president’s actions and disregard for our Constitution has led us to this place and time. However, I take very seriously my oath and sacred obligation to uphold the Constitution, and to hold the president accountable for his actions.

The president has violated his oath of office and with his actions, demonstrated complete disregard and disdain for our Constitution. President Trump abused the power of his office to solicit foreign interference in the 2020 presidential election for personal and political gain, and by doing so, risked the national security of the United States.

Then, when faced by a legitimate Congressional inquiry into his actions, President Trump chose to stonewall that inquiry, refuse to cooperate, and instead, mock its legitimacy. If we value our democracy and our Constitution, then we cannot ignore nor justify President Trump’s actions.

I came to Congress to make a difference for my constituents and to improve their lives. I did not come to impeach a president. Today’s decision is not just about holding this president accountable for his abuses of power; it is about restoring integrity and honor to the office of the presidency, and ensuring that any future president, regardless of political party, is held to the standard every American expects and deserves.

Thus, I cast my vote to impeach President Trump. 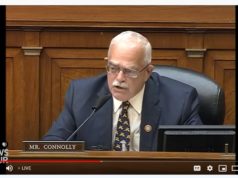