I still haven’t picked a candidate for the 2020 Democratic presidential nomination, but as Virginia’s March 3 primary approaches, I’ll obviously have to decide before I head into the voting booth (or hell, maybe when I’m *in* the voting booth, lol). Among the many other factors to consider will be electability, qualifications for the job, policy positions, etc. Also, I’ll be interested to see which Virginia elected officials, candidates, activists, etc. endorse which candidates – and why.

To date, there actually have been a lot fewer endorsements than I would have expected by now – Rep. Donald McEachin (D-VA04) and Rep. Elaine Luria (D-VA02) for Joe Biden; Rep. Don Beyer (D-VA08), State Senator Adam Ebbin, Del. Mark Keam , Norfolk City Councilwoman Andria McClellan and former Charlottesville Mayor Mike Signer for Pete Buttigieg; State Sen. Chap Petersen for Sen. Amy Klobuchar; Del. Lee Carter for Bernie Sanders; and several endorsements for candidates – Kamala Harris and Cory Booker, for instance – who are no longer in the race. If you know of any other presidential endorsements, please let me know in the comments section. 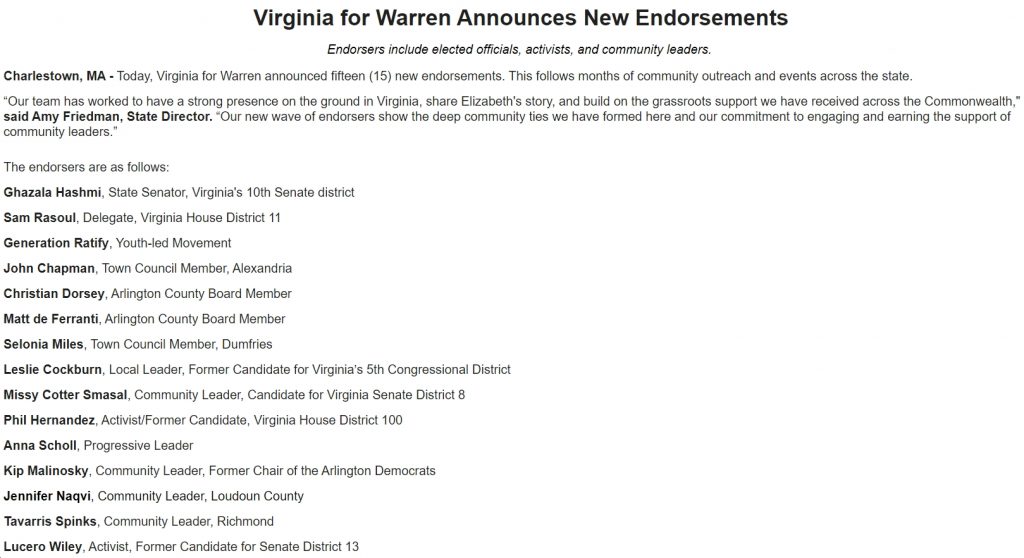