Wow, big endorsement for Mayor Pete Buttigieg’s presidential campaign, from Rep. Don Beyer (D-VA08). See Rep. Beyer’s statement, below…will add more as I get it. According to Beyer’s statement, “With [Mayor Pete Buttigieg], I feel the promise of a new generation, and I see a way out of the darkness.” Beyer also cites his “strong gut reaction to candidates,” his endorsement of “Barack Obama early,” and how Buttigieg “exudes” the “qualities missing from the current occupant of the Oval Office,” including “decency, a grounding in history, optimism, a sophisticated grasp of the world and the dangers of bigotry…a generosity of spirit…and…a gift for communicating.” 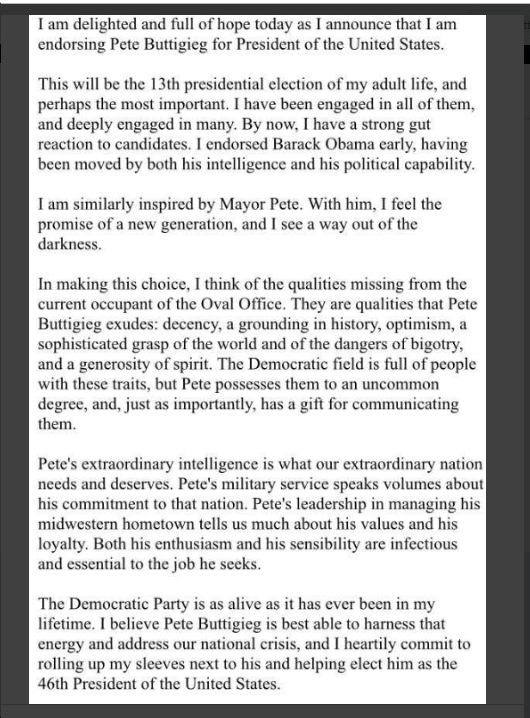 “I am delighted and full of hope today as I announce that I am endorsing Pete Buttigieg for President of the United States.

“This will be the 13th presidential election of my adult life, and perhaps the most important. I have been engaged in all of them, and deeply engaged in many. By now, I have a strong gut reaction to candidates. I endorsed Barack Obama early, having been moved by both his intelligence and his political capability.

“I am similarly inspired by Mayor Pete. With him, I feel the promise of a new generation, and I see a way out of the darkness.

“In making this choice, I think of the qualities missing from the current occupant of the Oval Office. They are qualities that Pete Buttigieg exudes: decency, a grounding in history, optimism, a sophisticated grasp of the world and of the dangers of bigotry, and a generosity of spirit. The Democratic field is full of people with these traits, but Pete possesses them to an uncommon degree, and, just as importantly, has a gift for communicating them.

“Pete’s extraordinary intelligence is what our extraordinary nation needs and deserves. Pete’s military service speaks volumes about his commitment to that nation. Pete’s leadership in managing his midwestern hometown tells us much about his values and his loyalty. Both his enthusiasm and his sensibility are infectious and essential to the job he seeks.

“The Democratic Party is as alive as it has ever been in my lifetime. I believe Pete Buttigieg is best able to harness that energy and address our national crisis, and I heartily commit to rolling up my sleeves next to his and helping elect him as the 46th President of the United States.”