by The Commonwealth Institute

The cost of health care coverage is a growing concern, especially for individuals and families who access health insurance through the Affordable Care Act (ACA) individual marketplace. A recent report by Altarum Healthcare Value Hub found that 79% of Virginia adults who purchase health insurance on the private market are concerned they will not be able to afford health coverage.

But for people who do not qualify for subsidies – families earning more than 400% FPL – average monthly premiums on the marketplace have skyrocketed, with only a small reduction in premium costs expected for the 2020 coverage year. Thankfully, there are several proposals this legislative session that could help strengthen Virginia’s marketplace and lower costs for families and individuals that rely on this coverage.

Currently, Virginia does not fully operate its health insurance marketplace. This has a number of implications: Virginia residents must enroll through the federal portal (healthcare.gov) instead of a state-specific site, the state does not have full access to enrollee information, and the state must abide by the federal open enrollment window without flexibility to extend it. These are all missed opportunities to connect more people with coverage.

It’s important to note that HB1428 and SB732 are budget neutral — after an initial loan for start-up costs — they will not incur additional costs to the state. Under these proposals, an existing fee that insurers currently pay to the federal government to fund its facilitation of the exchange would be redirected to the state of Virginia to facilitate its own state-based exchange (SBE). Other states that have shifted from a federally-facilitated marketplace to a state-based one have found that they can run it at a lower cost than the federal government, resulting in savings for the state.

Those savings can be used to better fund outreach and enrollment efforts. With full access to marketplace data and additional outreach and enrollment funds, the state could do more to encourage people to purchase health insurance on the marketplace. This is especially important for people of color. Latinx and Black individuals make up a small share of the population that earn above 400% FPL in Virginia, 6% and 13% respectively. However, Latinx and Black individuals make up a combined 40% of the population that are uninsured and earn more than 400% FPL. Yet at this income level, they do not qualify for subsidies, which would help them purchase health insurance on the marketplace.

Targeted outreach to these communities may result in more people covered by health insurance and lower costs for those enrolled due to a higher participation rate in the marketplace. Robust participation would mean a larger set of individuals to base premium rates on, including those who are more likely to be younger and healthier. Insurance providers would see this collective group, or risk pool, as a lower risk on average, which would likely lower premium costs across the board.

A reinsurance program allows insurers to offset high-cost medical claims through a combination of federal and state funds. The state, using a federal match, would repay insurers for high-cost claims or for enrollees who may require more expensive treatments and are therefore considered high risk. Insurers would then be able to base their premium prices on a healthier population or those who have less expensive claims. As a result, premiums would go down for all coverage plans sold on the marketplace.

The state costs of a reinsurance program would be financed in part by a proposed 30 cent tax increase on tobacco products. This dedicated revenue stream combined with federal funding creates a powerful tool to lower costs for people in the marketplace and is expected to result in a 20% reduction of marketplace premiums in Virginia. 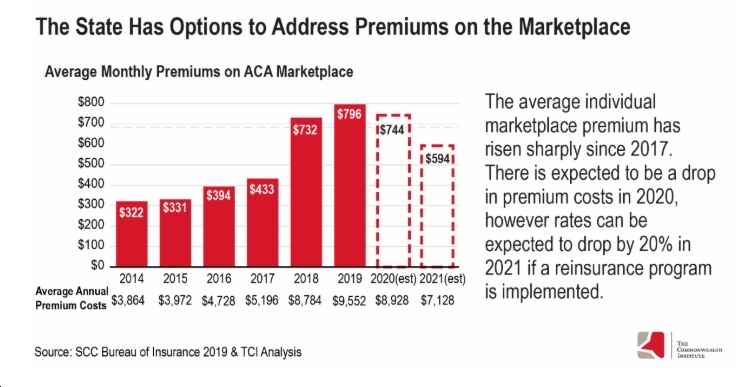 This proposal does not require separate legislation other than its inclusion in the final budget if it’s to be implemented. In addition, creating a reinsurance program would require the state to submit a 1332 State Innovation Waiver application to the Centers for Medicare and Medicaid Services (CMS) for permission to implement this program. Reinsurance programs have been approved in 12 states so far.

The Trump administration has loosened regulations nationally on health plans that function outside of the marketplace. The two types of plans that have been deregulated by federal changes are known as short-term, limited-duration (STLD) and association health plans (AHP). Both of these types of plans are often inadequate and put those who enroll at risk of being underinsured. They would also draw people away from the marketplace likely making the risk pool older and sicker, effectively counteracting and weakening state investments in a reinsurance program.

HB1037 and SB404 would place needed limitations on STLD health plans, limiting STLD coverage to 3 months in any 12-month period and prohibiting the sale of STLD health plans during annual ACA open enrollment. This is important because these plans can refuse to cover individuals due to pre-existing conditions and have been regularly found to not include services such as prescription drugs, substance abuse and mental health treatment, and maternity care. These plans are able to offer lower prices due to providing substandard coverage of basic health services and by discriminating against those with chronic illness.

Association health plans have similar consumer and market concerns. Premiums for these plans can be based on gender, age, or other non-health related factors at the employer level. Although there are proposals to add some consumer protections to these plans, the same proposals also expand access to AHPs which would likely take individuals away from the marketplace and into these lower quality health plans.

The time is now to make health coverage more affordable for hundreds of thousands of people living in Virginia, who rely on the individual marketplace for their health insurance needs. Virginia can effectively lower annual premium costs for those who don’t qualify for subsidies in a fiscally responsible way. By implementing the measures above, more Virginia families will have access to affordable and comprehensive coverage on the individual health insurance marketplace.

Learn more about The Commonwealth Institute at www.thecommonwealthinstitute.org

Friday Night Update from the ER in Arlington, VA: The “Tridemic” of “COVID, Respiratory Syncytial Virus (RSV), and Influenza all circulating at the same...

ER Nurse Kellen Squire Gives “a big “go **** yourself” to all of the performative concern about John Fetterman from people who lauded Herschel...