Some tweets, photos, video, etc. from Richmond this morning. Stay safe, everybody!

Here's what I know about the mask arrest so far.

Video strongly suggests Beschler wasn't supportive of the rally, but it's not clear if she was a counter-protester.

Also unclear: Why her bandanna drew police attention when others didn't https://t.co/Ejh1E4DGPG 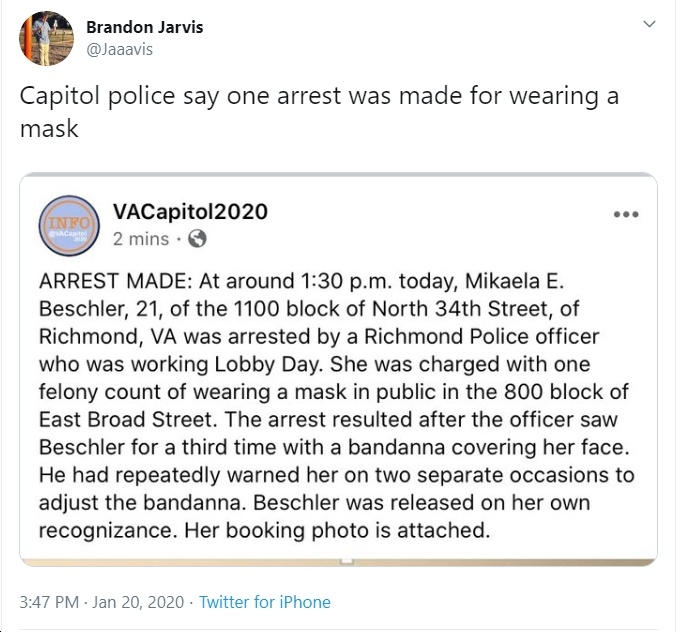 Gov Northam statement: We are all thankful that today passed without incident. The teams successfully de-escalated what could have been a volatile situation. This resulted from weeks of planning pic.twitter.com/KvI3nWpziG 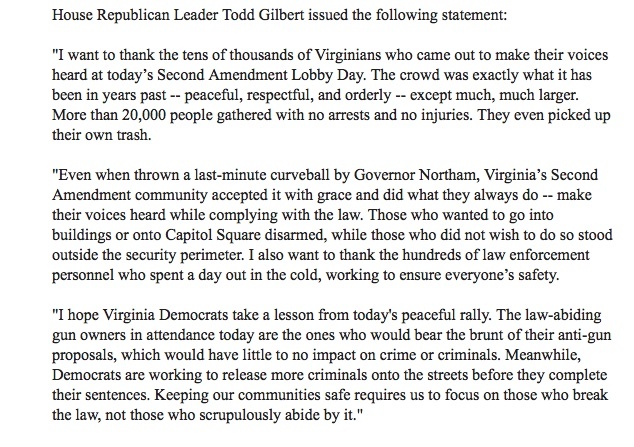 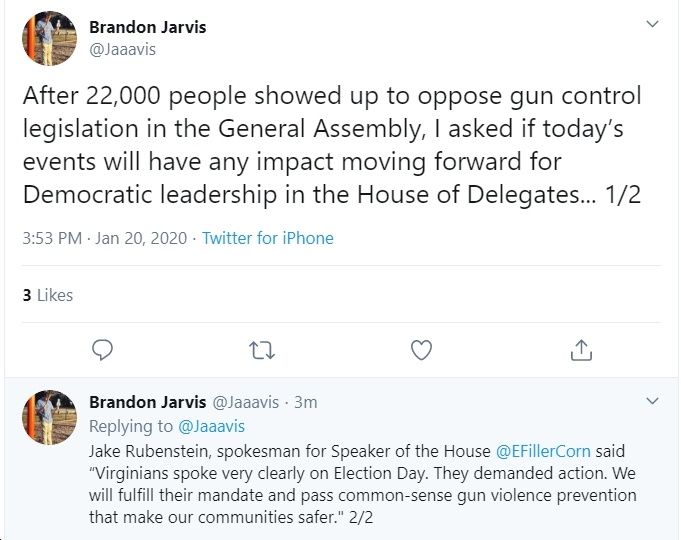 I’m pretty sure moving guillotine off street is not in the state police training manual. Cops getting this thing off the road to open it back up to traffic. pic.twitter.com/PYf0iueOCb 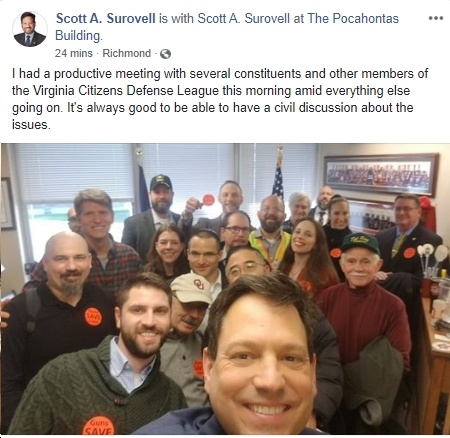 The rally has ended and people are steadily leaving the area. I have yet to see any confrontation. The protestors are leaving the designated areas towards areas not pretkected by police.

“I’m from Alabama and Arkansas. I grew up around guns. I’m not afraid,” Boysko told the group. “However, I think there are a small number of things we can do that would help reduce violence.” pic.twitter.com/umboPub4yD 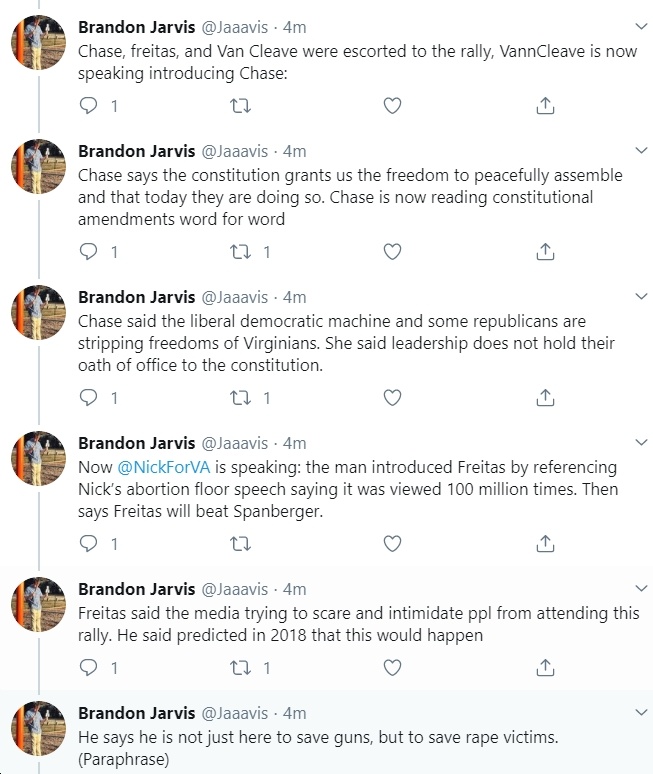 The rally is underway. Unclear where the speakers are. Right now it’s @NickForVA, who is running against Spanberger. 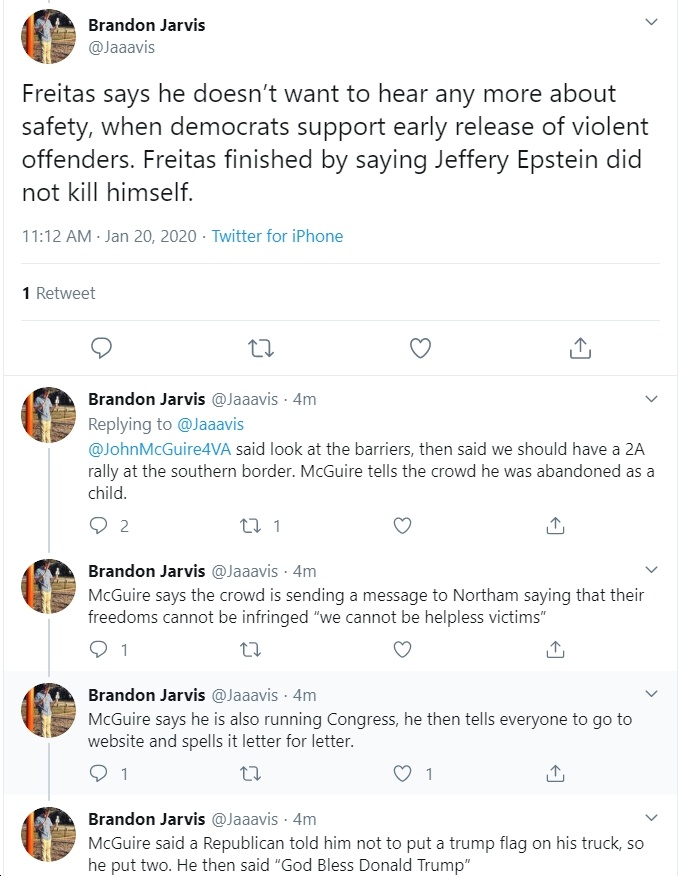 Rally is underway. The crowd is big pic.twitter.com/kSMZugUtbJ

A few lawmakers waving out at the big pro-gun crowd as the VCDL rally begins. The speaker system at the rally is very difficult to understand and there’s no stage so almost no one can see whoever is speaking pic.twitter.com/Xrv9wVsvHe

Alex Jones was in an armored vehicle yelling on a loud speaker this morning in Richmond?.
“#VirginiaRally” pic.twitter.com/UgPjlC4zin

People claiming to be part of a ‘militia’ have formed multiple lines on the corner of 9th and Bank. They’re starting to march. @8NEWS pic.twitter.com/ydpx7jHnhv

As of 10:30 am, 5,482 people entered the Capitol grounds: capitol police. pic.twitter.com/O5ppvDnA1r

Lady in red with the megaphone: “Hey! You on the rooftops. We will not comply!” pic.twitter.com/cVIYyvAfat

View inside the fence at 10:25 pic.twitter.com/IplfqYuaLn

These guns, and those carrying them at the Capitol, will make most Virginians feel less safe.

To many, heavily armed marchers represent a threat of violence and an attempt to intimidate legislators out of doing the will of the people. 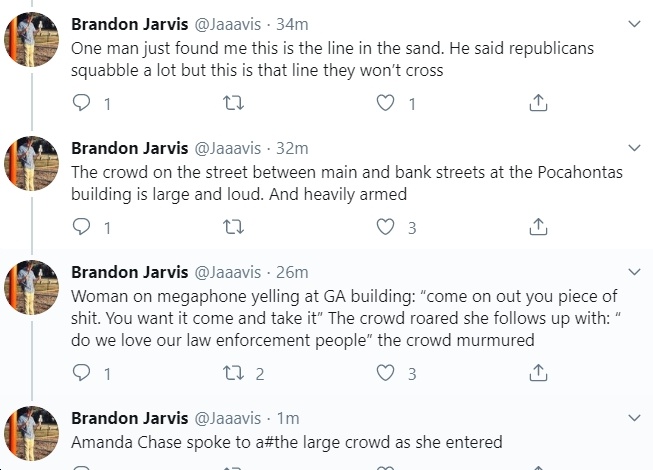 The scene outside the weapon-free zone pic.twitter.com/mu3QriStGf

Street view. These individuals can carry firearms. The crowd within the fences on the hill cannot be armed. pic.twitter.com/r8SGLVWPLB

Modest crowd inside the gun-free Capitol grounds in Richmond for the gun rights protest, packed crowd in the streets outside, where citizens are allowed to carry firearms. pic.twitter.com/1HXvxJim1S

What is so striking about the scene at the gun rights rally in Richmond is what you don’t see: almost no cops. Just that little cluster of state police there. No lines of riot cops. No law enforcement in riot gear. pic.twitter.com/W0jkwYmmkP

Told there’s been a few rounds of chants of USA! USA! So far this morning pic.twitter.com/BHw1a6rCJ8

Only entry for the dels to the left, armed protestors to the right, gun free zone above.

Electeds will have to walk past this unscanned group if they plan to enter the Capitol today. https://t.co/EH2YFHPd8S

Representation for the gay community is also in attendance at the 2nd amendment rally in Richmond, Virginia.

You can sign to recall the Governor apparently pic.twitter.com/5vAstVYCPS

Alex Jones is here and he posed for a photo with a milita pic.twitter.com/rn6vGQgqo7

There are people open carrying just across from Capitol pic.twitter.com/UGHUOxI9jB

These outfits simply scream: “We’re mad that over 80% of Virginians support common sense gun reform so we want to act out in ways that ensure it’s closer to 95%.” https://t.co/7AI87jow5X

Part of the crowd pic.twitter.com/4VZFUXap2e

I brought pillows and blankets, they brought their bravery and courage to lobby lawmakers when armed militias are outside. #IStandWithVirginia https://t.co/nN1B5GdRF5

Surprise! They couldn’t scare us away.

We traveled to Richmond in secret and camped out in the General Assembly buildings last night to be able to safely participate in our democracy today.

We’re carrying the stories of youth across Virginia with us. Stay tuned for updates! pic.twitter.com/bqXi5aEYHv

“Northam out! Northam out”
The crowd chanting to get the governor out of office ⁦@NBC12⁩ pic.twitter.com/Ru0VLrxJRr

The view down Franklin Street pic.twitter.com/wDv6iWFnH3

This is what security looks like getting onto capital Square. The man in front of me had a lighter and they made him get out of line. Another man had an aluminum chair and they made him leave it at the front gate.⁦@NBC12⁩ pic.twitter.com/veV7n5hB8I

VCDL supporters are getting off buses at the John Marshall Courts Building. Greeters are handing out hand-warmers. Mood is upbeat, so far no sightings of long rifles or military-style firearms. pic.twitter.com/kRh2WRHgMU

There are several groups waiting on General Assembly leadership meetings (or trying to force the meetings by creating a showdown) https://t.co/MSkcIuWxYm pic.twitter.com/1BPKhlP7Mn

Bigger crowd outside the Virginia Capitol right now than inside where guns are barred. Security screening went smoothly. @nbcwashington pic.twitter.com/xZP0Ju04xv

Good morning. Here in Richmond for @townhallcom to cover the gun rights rally outside the statehouse. Lots of people are choosing to stay outside of the security zone. pic.twitter.com/73F9DhgRCN

Meanwhile, on the inside, legislators attempt to continue to work despite what is assembling outside. Unfortunately, many people who might testify on these bills, incl. those from @GovernorVA‘s administration, are staying away (see empty chairs), making it harder to legislate. pic.twitter.com/fCJSHH6sX6

Here’s a line of heavily armed rally attendees outside the VA Capitol pic.twitter.com/ze2ZUYf0SR

Richmond, across from the security line into the capitol pic.twitter.com/B0YIQmNnVZ

Still waiting in line to get into the captiol. Have seen about 7 big buses pull past so far. pic.twitter.com/JOA8i8tInQ

Quick look at Va. gun rally ~6:30 a.m.:
— Small groups, some heavily armed, milling around
— A line is starting to form to get into the Capitol
— Police preparing to deploy dump trucks to prevent car attacks on closed roadways pic.twitter.com/L97NjVKTEw

Just Alex Jones and Proud Boys and entourage in front of the capitol in Richmond, and scattered media prepping their own stand ups in the vicinity. No protesters, no one interviewing Jones. pic.twitter.com/o508Exmwtk

I’m in Richmond and will be reporting on the Second Amendment rally tomorrow morning. This just drove by the Capitol. pic.twitter.com/xmyOZ8MS37

My hope is that everyone traveling to Richmond tomorrow is coming with peaceful intentions and the day will pass without incident. Our country was founded on free speech and a right to assemble. We can protect those rights while ensuring Virginians are safe #IStandWithVirginia

Youngkin Fails to Address the Root Cause of Gun Violence…Again