See below for a summary and video of this morning’s Senate Energy subcommittee meeting: 1) the Virginia Clean Economy Act (VCEA) apparently was considered as “not ready, still negotiating among stakeholders” (that makes me *very* nervous, especially given that Dominion’s almost certainly up to no good – what exactly are their “concerns?” – as usual), and the subcommittee voted to not recommend it to the full committee (although, as David Jonas of Clean Virginia points out, that doesn’t kill it, but isn’t a good sign either); 2) Sen. Scott Surovell’s community solar bill (SB629) moved ahead, which is good news; 3) in general, Dominion Energy still appears to be in control, at least on the Senate side, and certainly when it comes to opening Virginia up to electricity competition, which Dominion – corrupt crony capitalists that they are – would prefer not to see.

Other than that, I’m trying to find out more information, but overall it doesn’t sound great. Of course, none of us who were aware of the Senate Energy subcommittee’s Dominion-friendly lineup – Lionell Spruill (D, Chair), Tommy Norment (R), Steve Newman (R), Louise Lucas (D), Dave Marsden (D) – were expecting any better from these folks. The question really could end up being what happens in the full Senate Commerce and Labor Committe, what comes out of the House, then what happens in House-Senate conference committee at the end of the 2020 session. Stay tuned…

P.S. Might as well just call this the “Dominion Energy Senate Subcommittee on Energy.”

P.P.S. Almost forgot to mention, but Monday evening in the full committee, Sen. Spruill said out loud – twice – that his subcommittee could get through all the energy bills in “20 minutes.” Which struck me as a huge “tell” as to Spruill’s attitude, which is: a) completely not interested or serious about this subject; b) clearly intending to just kill everything quickly. For some background on Spruill’s, er, “illustrious” career (“truck nuts,”  “I’m not going to hell behind no Democrat,” Delegate Spruill Supports Republican Redistricting, etc.) see here.

UPDATE: Also worth noting is that Sen. McClellan stated to the subcommittee that “this is a big bill…to address a big problem.” She added that the “stakeholders…met for over 6 hours yesterday,” that “they have been told and understand that” they basically have to “have a deal by Friday,” and that she (Sen. McClellan) will “keep the pressure on.”

UPDATE #2: The biomass folks certainly are persistent in their advocacy for cutting down forests for fuel. I urge legislators to reject this stuff. 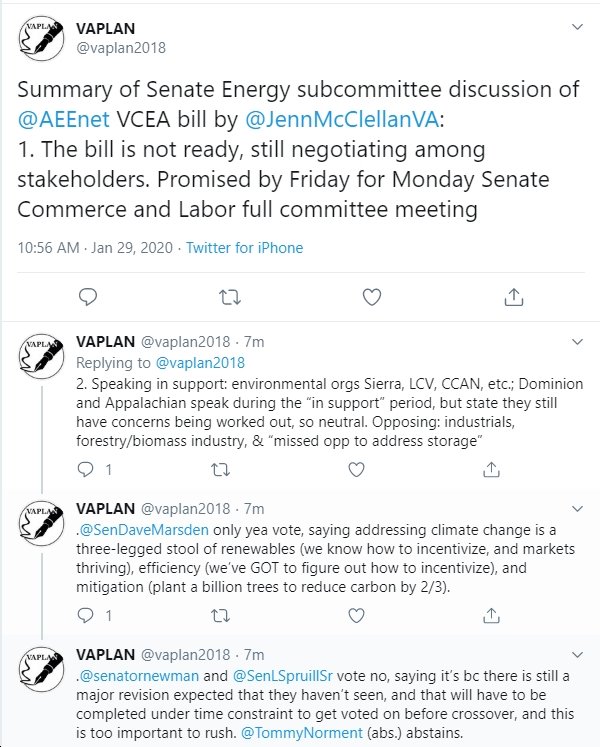 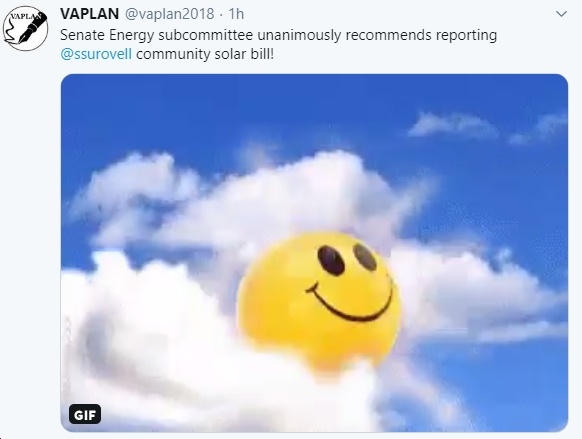 Whoa, not sure if I saw this correctly, but looked like Senate Energy Subcommittee just voted down the Virginia Clean Economy Act 1 to 3.

Again, not sure, but I think that doesn’t kill it, just not a great sign as it heads to the full Senate Commerce and Labor Committee. 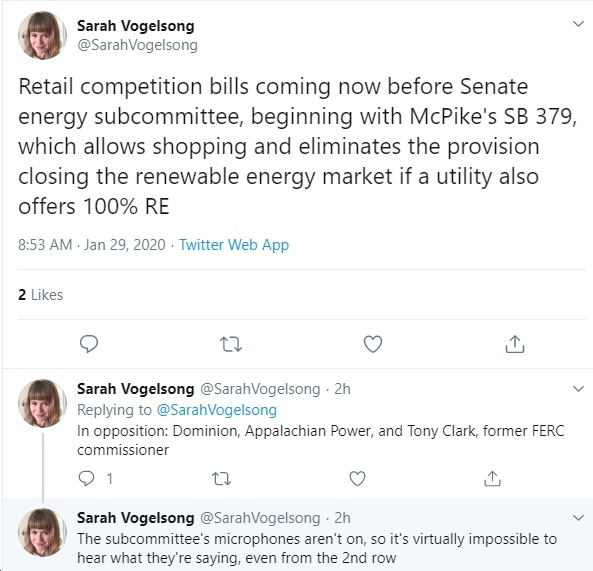 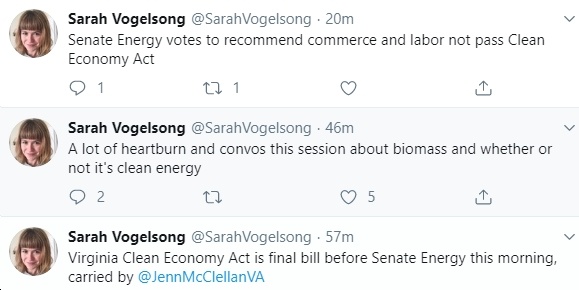 Today, the Senate Energy Subcommittee unanimously approved my bill to allow neighbors to pool their resources and build a community solar garden! Thanks @vasierraclub @LCVoters, @VCNVAorg, and other advocates for helping advance this legislation! pic.twitter.com/LkpeLKuhsH