Next two months in Virginia, we are going to see many amazing things. The Governor has been rolling out historic initiatives as we gear up for this session. The plan includes specific items to dismantle systemic barriers ranging from maternal health to criminal justice reform to tuition free community college to affordable housing to access to voting, and so forth.

The Governor has proposed a comprehensive education budget, with a cradle-to-classroom-to-career approach, putting equity at the forefront. Thirty-eight percent (or $1.5B) of new spending in FY21/22 is dedicated towards education. In addition to the $1.5B, there is also $895M in capital funding being invested in our colleges and universities, of which a significant amount is devoted to historically black colleges and universities.

Below are some major highlights from the education budget.

– $140.4M to increase the At-Risk Add-On for educationally at-risk students. This the largest single increase to this funding source. (In 2017-2018 school year, one-third of economically disadvantaged students and half of all students with disabilities failed their reading and math assessments, compared to just 8 percent of their non-economically disadvantaged, general education peers.)

– $99.3M for additional school counselors (Our children come to school with heavy back bags and sometimes heavier life burdens. We must prioritize the social-emotional needs of our students by investing in school counselors. The ratio of 1 counselor to 250 students is considered the gold standard. If fully funded, Virginia would be the third state in the nation to provide such robust social-emotional supports for students by investing in their counselors.)

– $27.6M to increase the number for instructional positions for English Language Learners. (Last year ELL students accounted for 13% of our overall student population. There has not been an update to staffing ratio for ELL teachers since 2005. The number of ELL students has increased drastically, 72,380 in the 2005-2006 school year to 107,147 in the 2018-2019 school year, an increase of 48 percent. The overall student population increased by only 6.2 percent during this time. There is an average of a 20% achievement gap between our English learners and their peers statewide. Increasing staff support is critical to meeting the needs of English Language Learners.)

– $10.6M to help schools reduce or eliminate cost of school breakfast and lunch for students who qualify for reduced price meals.

– $145.1M to increase salaries for funded SOQ instructional and support positions (This 3% raise in on top of the 5% Governor did last year, which was the highest in 15 years, totaling 8% overall.)

– $125M in additional per pupil flexible dollars. New revenue from games of skill to create a new flexible, per pupil pot of money distributed to our school divisions based on enrollment so that they can use these funds in a manner that best supports their needs.

– $45.4 million to increase funding for need-based financial aid for Virginia undergraduate students at our public colleges and universities.

– $145.1M tuition free community college. Which provides full cost of tuition, fees and books for students enrolled in high need pathways. (This includes wraparound financial assistance to help students at the lowest income levels with expenses such as food, transportation, and childcare. Students who qualify for full Federal Pell Grants and enroll full-time will receive a Student Support Incentive Grant on a semester basis. These grants will be in an amount up to $1,000 per semester and up to $500 per summer term.)

– Part of HBCU package includes $17M to launch the Virginia College Affordability Network Initiative, which provides wraparound supports to students attending Virginia State and Norfolk State. This funding provides for tuition, fees, and textbooks, as well as basic life expenses like food, housing, childcare, and transportation. Also included is funding for U-Teach, a program designed to get more math and science teachers into K12.

– $22M for ODU and $22M for GMU to support in-state enrollment growth and increases in transfer students.

– For Governor’s schools, there is proposed budget language which states that “Each Academic Year Governor’s schools shall set diversity goals for its student body and faculty, and develop a plan to meet said goals in collaboration with community partners at public meetings. Each school shall submit a report to the Governor by October 1 of each year on its goals and status of implementing its plan. The report shall include, but not be limited to the following: utilization of universal screenings in feeder divisions; admission processes in place or under consideration that promote access for historically under-served students; and outreach and communication efforts deployed to recruit historically under-served students. The report shall include the racial/ethnic make-up and socioeconomic diversity of its students, faculty, and applicants.”

This is the most thoughtful and comprehensive education budget in our history. It prioritizes funding to the most vulnerable Virginians who have been under-served for far too long.

Makya Renée Little, a Member of the Va. Commission on African-American History Education,” on How She Got Involved, What the Recommendations Are Looking Like 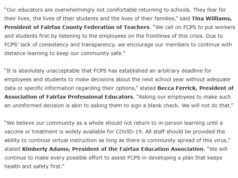 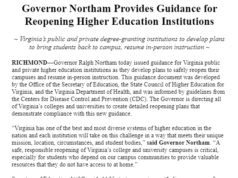