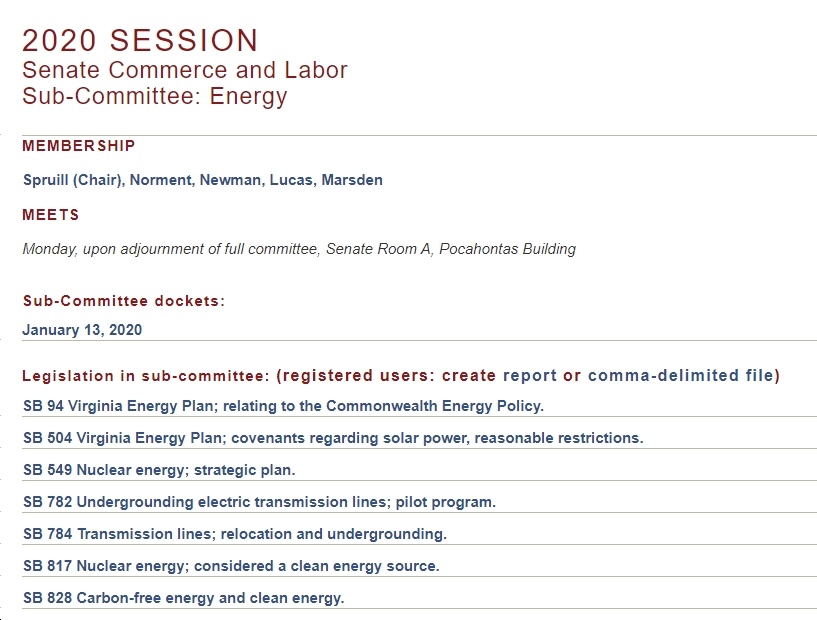 There have been thousands of bills filed so far in the 2020 Virginia General Assembly, on every subject under the sun, and  the job of starting to wade through them – and pare the thousands of bills down to a more manageable number – will fall largely on House and Senate subcommittees.

Historically – certainly in the era before live streaming and the internet – much of that occurred out of the public’s eyes and ears. And this served “The Virginia Way” very well, as progressive and/or environmental legislation could be killed quietly, without much fuss, and often without even recorded votes – thus, minimal if any accountability with voters. Amazingly, it was only in 2018 – after the Democratic “blue wave,” not coincidentally – that “the House of Delegates…for the first time…require[d] all votes in subcommittees be recorded.” Prior to that, as Del. Mark Levine pointed out at the time, “votes in subcommittee were not recorded, residents were unable to see how their elected representatives voted on bills that failed to move forward in the legislative process.”

The result of these changes? “The percentage of measures spiked without a recorded vote dropped from about 55 percent in 2017 to less than 30 percent in 2018, according to VPAP, a nonpartisan tracker of money and trends in state politics.” Of course, “There are still a number of ways to defeat measures without a recorded vote, such as consolidating a bill into another lawmaker’s, referring it to a committee that is no longer scheduled to meet, or a committee simply not bringing it up for a vote.”  Finally, another move towards transparency in these subcommittees has come about due to live streaming of meetings, including by Progress Virginia’s excellent “Eyes on Richmond” service.  I’m not sure how many people watch these feeds, but at least they’re available for reporters, activists, etc.

So anyway, starting this Monday afternoon, we’re going to really get going with committee and subcommittee meetings. For instance, on the calendar for Monday afternoon is “Senate Commerce and Labor Subcommittee on Energy; Senate Room A, Pocahontas Building – Immediately upon adjournment of Commerce and Labor.” You can see, in the screen grab at the beginning of this post, what’s on the “docket” for that meeting and, also, who’s on the subcommittee. This can start to give us an idea for what might end up happening to legislation on a variety of topics – in this case, energy. In this case, a few things jump out at me:

In sum: While we won’t get a full idea Monday afternoon as to the inclinations of this subcommittee, we *will* get some hints as to where it might be going, and to what extent it’s willing to push ahead aggressively – or not – on moving Virginia rapidly away from dirty/dangerous fossil fuels and towards a sustainable, clean energy economy. Stay tuned!