I’m not a big podcast listener, but one that I *do* check out fairly frequently is Greentech Media’s The Energy Gang, which describes itself as “a weekly digest on energy, cleantech and the environment,” with hosts Stephen Lacey, Katherine Hamilton, and Jigar Shah. And, in general, I really like it, in part because they cover topics of intense interest to me, but also because they generally do an excellent job at it.

Given all that, I was very excited, listening to this week’s episode, to hear that they were going to discuss the Virginia Clean Economy Act (VCEA), a topic of much discussion and debate here on Blue Virginia, in social media, in the General Assembly, etc. But…as I listened, my enthusiasm quickly turned to puzzlement, frustration, even anger, at comments like:

So…in reality, there were actually Z-E-R-O Republican votes for the Virginia Clean Economy Act – see here for the House vote and here for the Senate vote, both of which were “party-line,” other than two Democrats voting no and one abstaining in the House of Delegates. Other than that, as far as I’m aware, not a single Republican voted for VCEA, whether in subcommittee, committee or on the floor. Also, as far as I’m aware – and I’ve asked around – Republicans weren’t supporting VCEA behind the scenes, either.

In short, it is absolutely NOT the case that “lawmakers across party lines band[ed] together” on this, and it certainly wasn’t the case that the version of VCEA coming out of the House of Delegates was stronger than the Senate version because of *Republicans* (!). To the complete contrary, the House of Delegates bill was stronger because Democrats have a more progressive, 55-45 majority there, compared to their more narrow, more conservative 21-19 Senate majority. Oh, and also grassroots pressure to strengthen the bill seemed more effective in the House than the Senate. But again, *not* on Republicans…only on Democrats.  So why argue, repeatedly, that Republicans played a major role here? No clue, but it’s very frustrating, given how hard Democrats worked on this, with essentially ZERO Republican support (and really, this is the case not just here in Virginia, but in Congress as well, where Republicans continue to be the anti-environment, pro-fossil-fuel, climate-and-science-denialist party).

With that, check out the tweet stream, between Katherine Hamilton and Adam Siegel (who is an energy expert and someone who has delved deeply into understanding the VCEA – both its substance and its politics), below, followed by a few more thoughts from me on all this…

First, here’s Adam Siegel responding to Katherine Hamilton’s tweet regarding her Virginia comments lacking “nuance.” As Adam points out, that is not an accurate way of describing the issue. 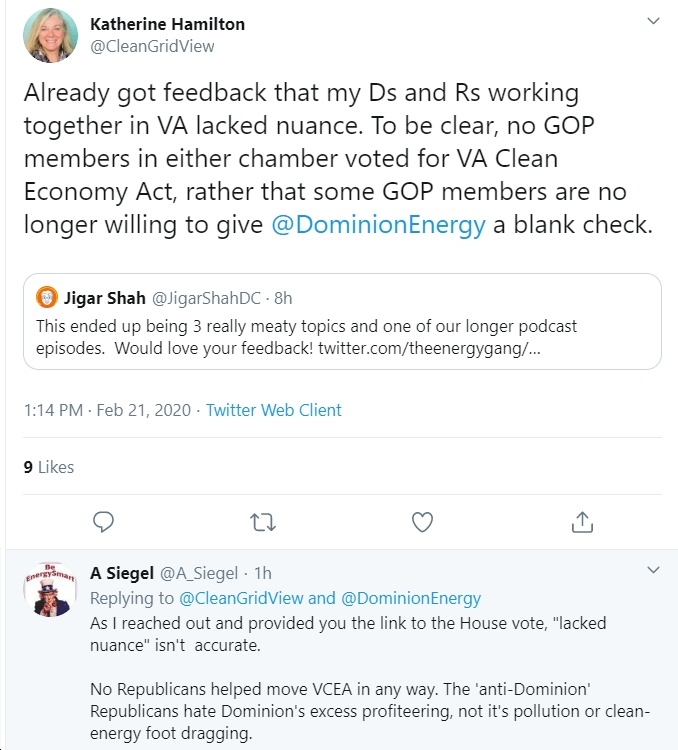 Next, here’s an interesting exchange between Jigar Shah and Adam Siegel…which makes clear that the problems with the discussion were *not* Jigar Shah’s fault at all (in fact, his comments were spot-on). 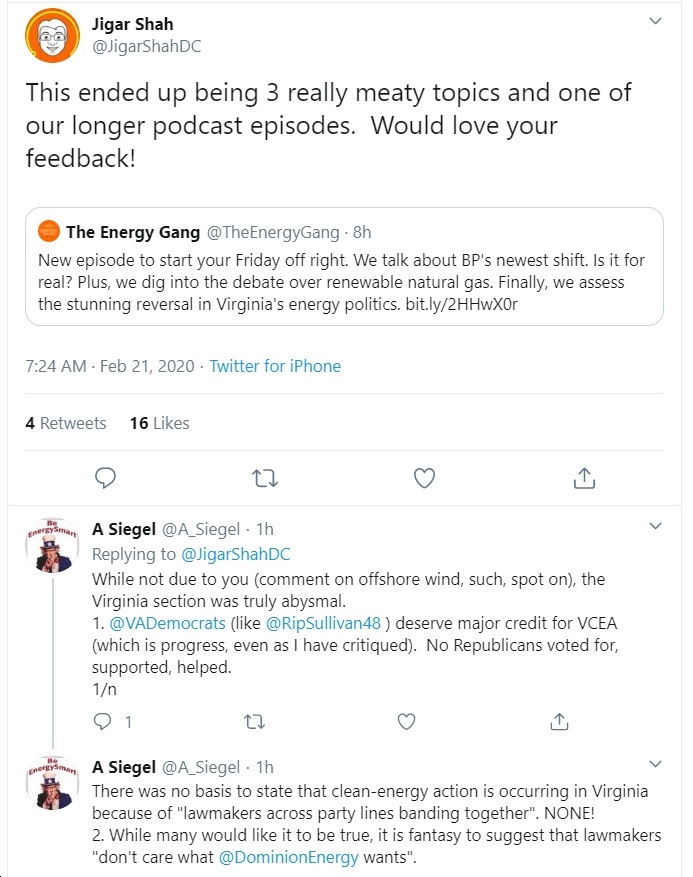 And a few more thoughts by Adam Siegel, on how “things are happening because [Virginia Democrats] have the trifecta” (Governor’s mansion, House of Delegates, State Senate), NOT because of any help from Republicans! 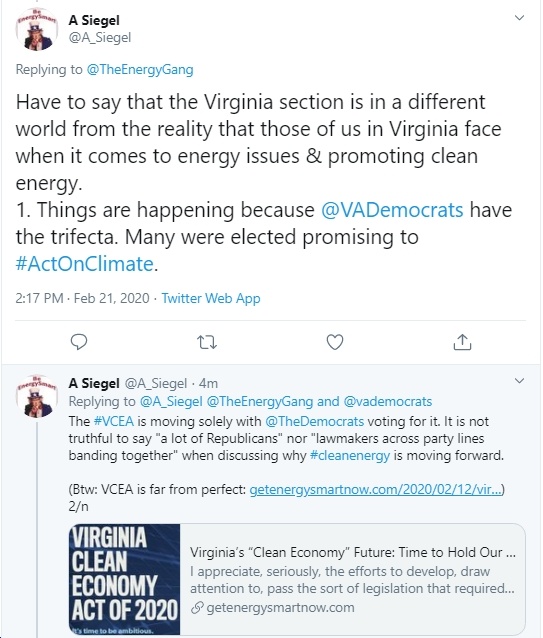 I agree with everything Adam says. I’d just elaborate a bit, that as far as I’m aware, there aren’t really any “anti-crony-capitalist” Republicans (or maybe, being *very* generous, perhaps 1-2? Del. Lee Ware? Sen. Amanda Chase?) in the Virginia General Assembly. Also, I’m also not aware of any Virginia General Assembly Republicans (with the exception of Del. Lee Ware) having seriously taken on Dominion. As for Democrats, they have certainly taken on Dominion to a degree, but it’s a major overstatement to claim that they have “not been afraid to take on Dominion.” Instead, I’d argue that Democrats – and environmental groups, clean energy industry folks, etc. –  have pushed Dominion about as far as possible, but given that company’s continued power in Virginia politics, they could only push so far, without risking Dominion blowing up the legislation entirely. But absolutely, they all had to be conscious of Dominion as a continued, major power in Virginia, and could absolutely not discount that in their negotiations.

The bottom line is that, other than being factually inaccurate, there’s simply no basis for giving Virginia General Assembly Republicans any credit for getting VCEA as far as it’s come. Instead, basically all the credit in the legislature should go to Democrats like Del. Rip Sullivan, Del. Alfonso Lopez, Del. Dan Helmer, Del. Jennifer Carroll Foy, Sen. Jennifer McClellan, Sen. John Edwards, Sen. Dave Marsden, Sen. Adam Ebbin, and many others. As for Republicans, they simply haven’t gotten serious on the climate crisis or the urgent need to transition our economy to 100% clean energy as rapidly as possible.

To end on a positive note, I definitely want to second Adam Siegel’s comments about Jigar Shah’s astute, insightful remarks about offshore wind (and in general) being spot on. As Shah explains:

“When you think about where we are right now…this has been, I think, the most progress we have made in a very long time…this really is down to economic development…one of the big, big players here has been Orsted and their work on the offshore wind farm, because Dominion is going to make a gargantuan amount of money by rate-basing that wind farm…so, part of this is there’s an enormous carrot over here for Dominion to keep them occupied while the rest of these other things get through…So this is an enormous sea change, and it’s a real kudos to the people on the ground, who have been spending a lot of time organizing and helping to get these new folks elected to the Virginia House and Senate.”

I also agree with Stephen Lacey that VCEA is an “indication of just how dramatically the politics have changed” in Virginia, certainly related to energy. Namely, that when Democrats are in charge, we actually make progress (albeit imperfect). When Republicans are in charge…we don’t make progress. And I agree with Lacey that VCEA is a “big deal here in Virginia”; that “few utilities were more synonymous with coal than Dominion, and now it looks like all six of Dominion’s coal plants in Virginia could be shut down within ten years.” So…yes, I agree with a lot of what the Energy Gang folks say, but obviously not with arguing that Republicans played any form of positive role in any of this.

With that, here’s the audio…Virginia discussion starts a bit after 40 minutes in.