Details Matter When It Comes to Raising the Minimum Wage

Everyone in Virginia working a full-time job should be paid enough to provide for their family. However, for many this is not the case. Legislators have the opportunity to strengthen Virginia’s working families by raising the minimum wage to $15 and removing several existing exclusions from the law, many of which have origins in Jim Crow-era restrictions.

There are key differences between the proposals under consideration by the House and Senate, which could have a major impact on how many — and how significantly — Virginia’s working families benefit.

First, House Bill 395 (Del. Ward) as amended in subcommittee on January 28 would raise the minimum wage to $15 by 2024. It would also remove exclusions for agricultural, domestic, piecework (paying by piecework would still be allowed, but total pay would have to be at least the minimum wage) and 16- and 17-year-olds, and creates a base wage for tipped workers. The bill would ensure that, starting in 2025, the minimum wage is automatically adjusted for inflation to keep up with the cost of living and to prevent the value of the minimum from eroding as it has over the years.

Senate Bill 7 (Sen. Saslaw), as introduced, would have raised the minimum wage to $15 by 2025, followed by automatic annual increases to keep pace with inflation. But the Senate Commerce and Labor committee amended the bill on January 27 to freeze the minimum wage at $11.75 for any employee who receives an offer of health insurance from their employer, even if the premiums for that health insurance is unaffordable to the employee. This amendment would add significant new complexity to the law and would make enforcement more difficult, which is why states and localities have generally not adopted this approach when increasing the minimum wage. Additionally, SB 7 as amended on January 27 does not have any mechanism for helping the minimum wage keep up with consumer prices in future years and creates a new subminimum “training wage” for certain people during their first 320 hours of employment. 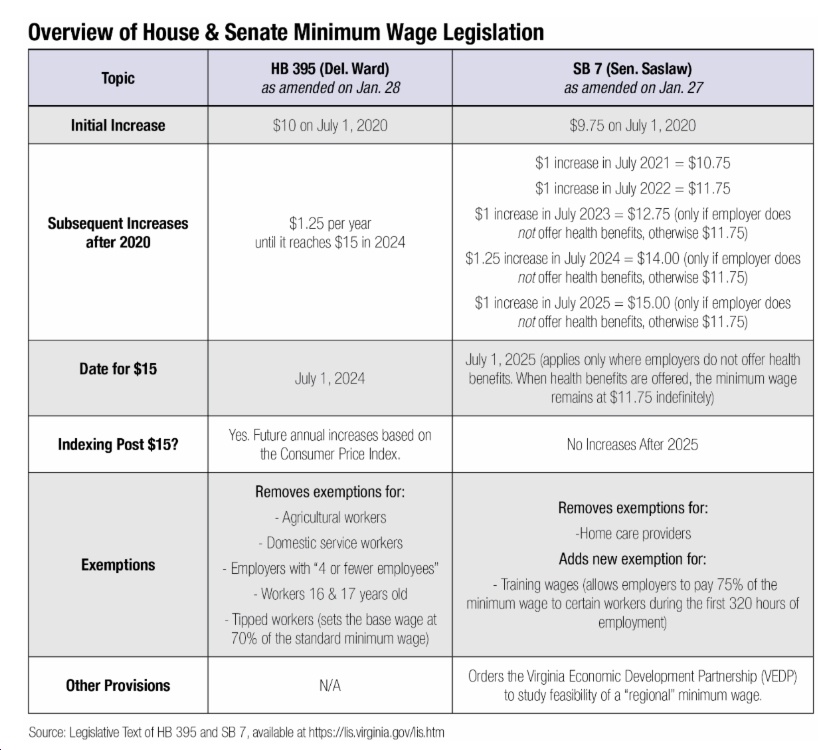 The differences between HB 395 and SB 7 would have real meaning in terms of the wages of working people in Virginia. By July 2025, SB 7 as amended on January 27 would provide wages that are 22% lower for low-wage workers who are offered health insurance compared to what they would receive under SB 7 as it was originally introduced. By July 2030, wages would be 30% lower under the amended bill. By comparison, HB 395 would continue to provide slightly higher wages than the introduced version of SB 7 as the minimum wage continued to maintain pace with consumer prices after reaching $15 in July 2024. 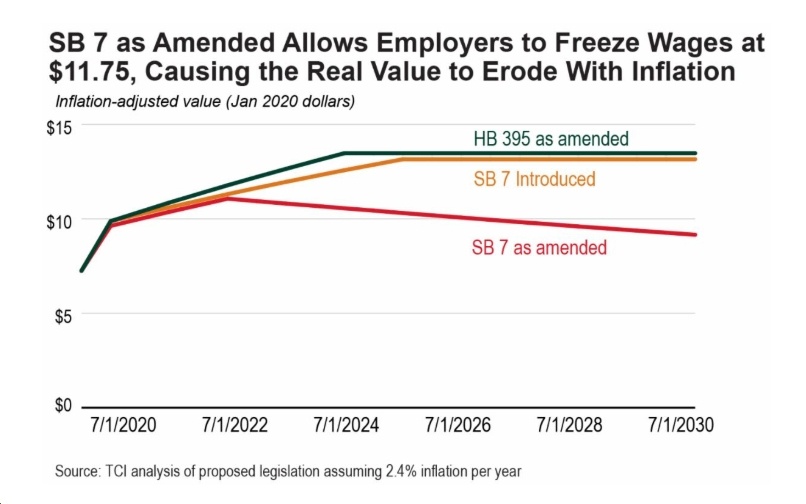 The federal minimum wage has eroded significantly since the late 1960s compared to the typical cost of living, median wages, and the economic productivity of working people. Virginia’s current minimum wage, set at $7.25 an hour to match the federal minimum, is the lowest in the country compared to the typical cost of living in the state, according to OxFam’s State of Working America report. And since working people of color in Virginia are more likely than white workers in Virginia to be stuck in low-wage occupations due to ongoing job discrimination, lack of educational opportunities, and other barriers that white people in Virginia are less likely to have faced, the erosion in the minimum wage has particularly harmed Black and Latinx working people.

In 2020, Virginia policymakers can and should make new choices that will help the very people and families in Virginia that have faced the greatest barriers. Raising the wage to $15 an hour by 2024 would benefit 1 in 3 working people in Virginia, including 1 in 2 women of color who are working in Virginia. It’s time to raise the minimum wage, close loopholes, and provide a boost to working families across the commonwealth.

Collective Bargaining: Good For Falls Church Schools, And For All Virginia Localities!