Virginia has been in the national spotlight this legislative session on a number of issues, yet few have garnered the amount of attention that the Equal Rights Amendment has and its potential impact for women in the state and across the country. While the ultimate fate of the ERA is unknown, and may not be known for years to come, Virginia doesn’t have to wait for that verdict to make strong policy decisions that improve the lives of women in the commonwealth. State lawmakers can choose this session to enact policy that supports and uplifts women while breaking down barriers to economic opportunity.

We all want communities where every parent can find a job that pays enough to support their children with dignity. Women are vital to the state’s workforce and the overall strength of Virginia’s economy is intrinsically linked to the economic status of Virginia women. But past public policy decisions have created pockets of disinvestment where too many families — particularly families of color — are unable to get good jobs and provide safe, healthy housing for their children.

Today’s leaders have the opportunity to begin to dismantle some of those barriers and promote shared prosperity. We can invest in Virginia’s workforce and boost the wages of 750,000 women working in Virginia by increasing the minimum wage. We can establish a paid family and medical leave program that allows parents to take needed time off without fear of losing their job or income. And we can make clear budget choices that prioritize women across the commonwealth.

Women are vital to Virginia’s workforce

Yet, there is a distinct gender earnings gap

Despite the fact that many women in Virginia are working, they are more likely to work in jobs that pay low wages. They are also more likely than men to have higher caregiving responsibilities that impact their ability to work. Having greater caregiving responsibilities further highlights the need for adequate wages to properly care for their families. According to the Bureau of Labor Statistics, in 2018, Virginia women who worked full time had median weekly earnings of $851, which is only 79.6% of the $1,069 median weekly earnings for their male counterparts.

Raising the minimum wage would lift women out of poverty

Virginia’s minimum wage level is currently set by law to be the same as the federal baseline despite Virginia having a robust economy and higher-than-typical cost of living, especially related to housing costs. As a result, Virginia’s minimum wage is the lowest in the country compared to the cost of paying for rent, groceries, transportation, child care, and other necessities. Raising the minimum wage to $15 by 2024 would help reverse the erosion in the value of the minimum wage since 1968 compared to productivity and typical wages, making sure that working people — especially women who have historically had their work devalued and underpaid — see a fairer share of the benefits from their work.

The vast majority of working people in Virginia who would benefit from raising the wage are adults helping to support themselves and their families. Raising the minimum wage to $15 an hour by 2024 would help 1 out of every 2 women of color employed in Virginia, thereby boosting the wages of those Virginians who have historically been excluded from opportunities to work in well-paying jobs and have seen the jobs they do have devalued precisely because they are filled by women of color.

In addition to raising the wage, it is critical that lawmakers remove exemptions that have historically prevented many women, particularly women of color, from earning the minimum wage. The domestic worker exemption is one such example. A large majority of in-home workers in Virginia are women, and many are people of color, according to a published 2013 study by the Economic Policy Institute. In fact, 99% of nannies, 93% of maids and other house cleaners not hired through agencies, and 86% of non-agency direct-care aides in Virginia are women. There are over 17,000 people employed in private households in Virginia as cooks, maids, nannies, butlers, and outside workers such as gardeners, caretakers, and other maintenance workers. There are also about 7,000 non-agency direct care aides in Virginia. And there are additional workers in other industry categories who may be currently left out of minimum wage protections by Virginia’s domestic worker exclusion. These women deserve to be paid a fair wage.

House Bill 395 (Del. Ward) would raise the minimum wage to $15 an hour by 2024, remove harmful exemptions so that more people have access to the wage, and create a base wage for tipped workers that is above the federal base of $2.13. 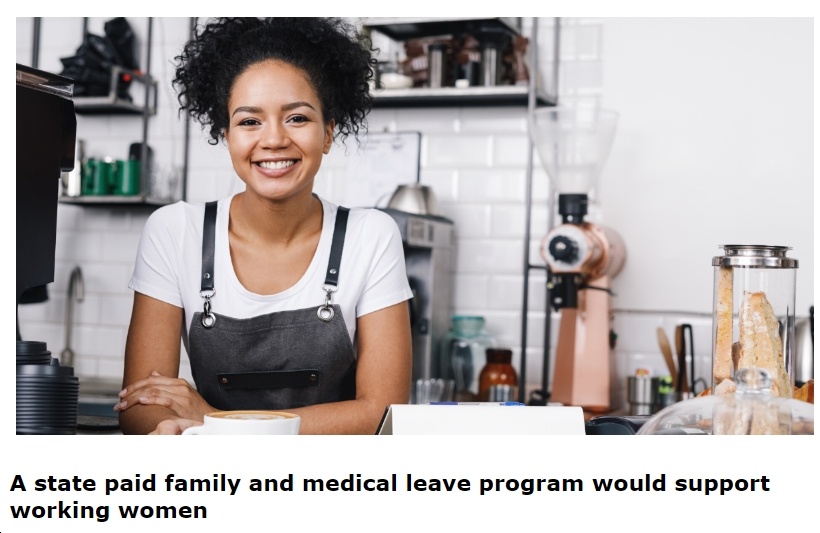 A statewide paid family and medical leave program would give more working families a chance at a healthier, more prosperous future. It would allow working people in Virginia to take extended time off from work to care for themselves or a loved one, without risking their financial security. Employees and employers across the commonwealth would all pay into a common fund so that when an employee needs to take extended time off, they will still receive a majority of their usual pay.

House Bill 825 (Del. Carroll Foy) and Senate Bill 770 (Sens. Boysko and Hashmi) would implement a 12-week paid leave program for all working people who meet the monetary minimums to qualify for state unemployment benefits, which is about 83% of Virginia’s civilian workforce.

Inadequate compensation for teachers is a nationwide problem and that problem is particularly pronounced here in Virginia. Nationally, teacher compensation (salary and benefits) is 21.4% below other college graduates, according to the Economic Policy Institute’s wage penalty calculations. Virginia has the third largest wage penalty in the nation at 31.3%, meaning that teachers make a little more than two-thirds the salary and benefits of their other college educated peers.

This wage penalty has clear consequences on women across the state. In 2018, more than 80% of primary and secondary school teachers living in Virginia were women. For preschool and kindergarten teachers (among the lowest compensated in the profession), 97% were female. For special education teachers (the greatest shortage in Virginia schools), 88% were female.

Inadequate compensation also serves as a barrier for diversifying the teacher workforce. The vast majority of teachers in Virginia (75%) self report as white, despite clear evidence on the benefits to students of color for having teachers and principals that look like them. Low salaries particularly deter Black college graduates from entering the field, because on average they have larger outstanding student loan payments than white college graduates.

Lawmakers have the ability and the opportunity right now to improve the economic well-being of women across the commonwealth. Increasing the minimum wage, removing exemptions so more women have access to a fair wage, and establishing a paid family and medical leave program are smart policy solutions that would prioritize women and increase economic opportunity.