The Mt. Vernon Democrats held their annual Mardi Gras party and straw poll tonight, with a 170 people in attendance. The highlight of the night was speeches by surrogates for the Democratic presidential candidates, with the exception – for whatever reason(s) – of the Elizabeth Warren campaign. I’ll post video of the surrogate speeches as soon as they finish uploading to YouTube. For now, here are the announced results of the straw poll: 1) Mike Bloomberg (63 votes); 2) Amy Klobuchar (24 votes); 3) Pete Buttigieg (22 votes); 4) Elizabeth Warren (18 votes); 5) Bernie Sanders (14 votes); 6) Joe Biden (12 votes). {UPDATE – They texted the final results to me; see below}

P.S. I’m told that Bloomberg gave the Mt. Vernon Dems $5,000 for this event. Also, his surrogate (Allison Silberberg) was given extra time…although actually, Sen. Chris Dodd (for Biden) ended up speaking the longest. 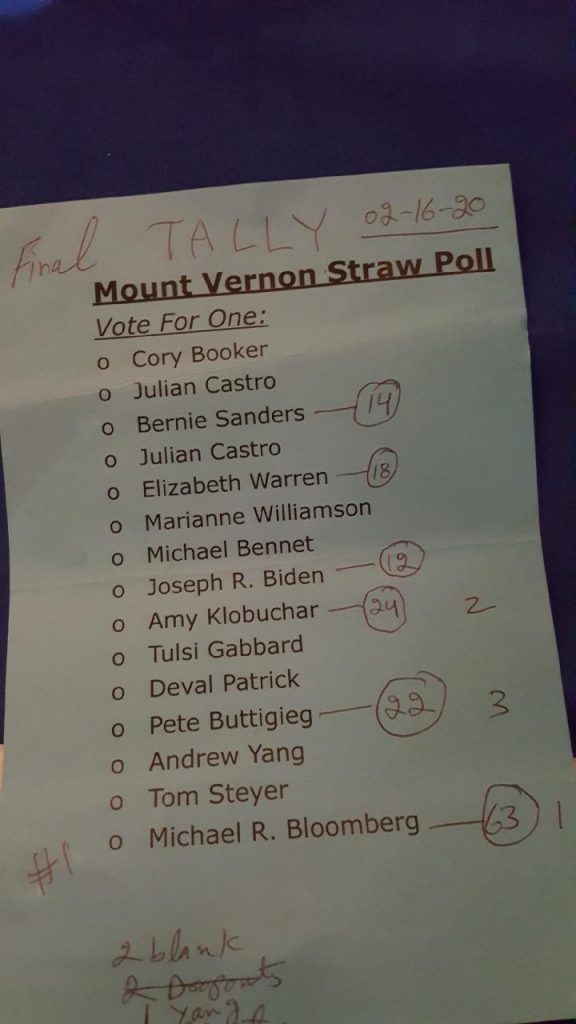 By the way, it was great finally meeting former U.S. Senator Chris Dodd, who was there to speak for Joe Biden. I grew up in Connecticut, but had never met Dodd all these years.

.@SenChrisDodd got the Mt. Vernon Democrats fired up for @JoeBiden! pic.twitter.com/M6ZFloOmOn

P.S. Also, here’s a representative for the Mark Warner for U.S. Senate campaign reminding everyone how crucial it is for Democrats not just to win the White House, but to take back the U.S. Senate and hold the U.S. House this November.