See below for video from a little while ago, as a watered-down version of Del. Elizabeth Guzman (D)’s HB582 – “repeal[ing] the existing prohibition on collective bargaining by public employees” – was reported from the Senate Commerce & Labor Committee. The “watered-down” part is that Senate Majority Leader Dick Saslaw (D)’s version of the bill (SB939) is that it’s “strictly local opt-in by local governments” on collective bargaining, as Saslaw put it, as well as that it “provides that prohibition against striking for public employees applies irrespective of any such local ordinance.”

Among those testifying in favor of collective bargaining by public employees were Virginia AFL-CIO leader Doris Crouse-Mays, who explained that “Virginia is one of three states that doesn’t allow public employees to have collective bargaining.” Crouse-Mays argued that “it is time that we recognize all of our workers in this state, whether they work for a locality or…the state, that they have a voice and a say on the job, and it is time that we give workers these rights.”

There was an interesting exchange between Saslaw and a Virginia Professional Firefighters representative, who argued in favor of “a stronger bill that will give collective bargaining rights to everybody.” Saslaw responded:

“Let me explain something, the votes – including mine – aren’t there for expansion beyond local government. I want to be as clear as I can; when I agreed, talking with some people, to put this bill in, that’s what I made it abundantly clear, that it’s for local government employees *only*, and if it goes beyond that, there’s myself and probably a few others that may not be voting for it on the floor. So you have to make a choice, do you want something or do you want…is it all or nothing?”

Opposition to the bill basically argued that collective bargaining will “drive up costs and divert precious resources away from classrooms and the money will instead be spent on lawyers and arbitration, protracted bargaining and all the other costs that we know go along with collective bargaining and a unionized workforce.” Another argument was that “teachers deserve all those things, but collective bargaining puts it on the back of localities and…the state should help with those things.” Not surprisingly, the Koch brothers’ “Americans for Prosperity” were also against, because…of course they were. Same thing for the Virginia Chamber of Commerce, the anti-union “National Right to Work Committee,” etc.

Oh, and according to the always-wrong Sen. Mark Obenshain (R), this is “all about money” – specifically, large amounts of union money going to (Democratic) political campaigns – and this is “just a start” – will supposedly lead to strikes, will supposedly “force teachers and the membership into paying dues,” etc. Sen. Saslaw’s snarky response to Obenshain: “With respect to union contributions…of course we all know the business community doesn’t contribute anything to any elections, so…” The bill then was reported out of committee on a 12-3 vote. If interested, you can check out the video of the committee meeting, below.

P.S. This, by the way, was an excellent example of how the State Senate is both more conservative than the House of Delegates – as I wrote about yesterday – and also has a smaller Democratic majority. As always, elections have consequences, in this case leading to the watering down of a collective bargaining bill. 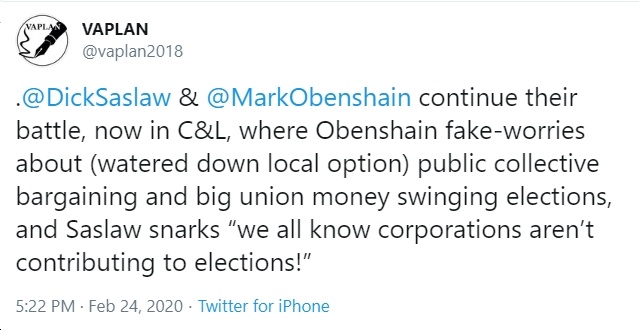