I appreciate, seriously, the efforts to develop, draw attention to, pass the sort of legislation that required in our times.  Within my space, two bills have represented two overlapping visions and paths for moving Virginia toward a cleaner, climate-sensible future: the Virginia Green New Deal (GND-VA) and the Virginia Clean Economy Act (VCEA). 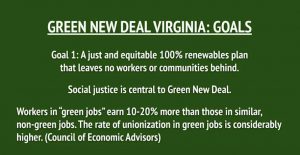 In Richmond, the GND-VA legislation has fallen by the wayside. Even though aligned, strongly, with the principles, ideals and concepts of the GND, I see that the challenges weren’t just ‘what will The Dominion Way‘ allow legislators to do: it required (and hopefully will have) further development as to legal structures, specific code language, technical details, and beyond.

On the other hand, from it’s outset, the VCEA was pre-compromised (doing so much of the ‘sausage-making’ of legislation development before the public saw a syllable), with inadequate targets, and too cognizant of Dominion’s (and Appliachian’s and other business) interests before those of the actual citizens of Virginia and the realities and necessities of the climate crisis.  I’ve regretted, with dismay, how backers (such as environmental organizations) have band-wagoned behind VCEA with cheer-leader like enthusiasm, rather than providing openly painful statements of pragmatic support even as the bill has (from what I can tell) been weakened further. I have been dismayed at too many exaggerated statements about what the VCEA really means in terms of Virignia’s status among the states in terms of clean-energy leadership.  Thus, to be clear, I don’t ‘like’ the VCEA. I do not believe it is ‘what’ we need. I know it is not ‘enough’.

Yet, the time has come to face a clear reality: the GND-VA will not pass the House, it will not become law (this year). While those who developed and are promoting it have set a marker and opened a conversation, that conversation and development will need to be continued into the coming year.  The questions before us (the legislators):

When it comes to the VCEA, I know it

I know all of this and, yet, holding my nose, I support its passage.

With all its (all too serious) flaws, the VCEA would

The VCEA would move Virginia from a true laggard on clean energy and climate policy to a position at least solidly in ‘the middle of the pack’ with the potential that it helps set the structure for even more serious moves forward in the coming years.

Please consider this seriously: It is time for us to hold our noses.

And, in holding our noses, to be figuring out paths forward to achieve what is necessary and valuable.

It is time for those who understand the urgency of the climate crisis to coalesce to, however grudgingly, come to the table to help VCEA’s passage even while working to modify the VCEA (and/or other legislation) for the better and that will help achieve better things tomorrow.

As to ‘modify’, here are two discrete ideas:

I know it is hard to get there, but sometimes it is time to ‘hold the nose’ and support mediocre and inadequate because the option of nothing is worse.